Here I am once again, Chess the purebred border collie. You may remember me from such excellent posts as “Another Lonely Day” and “Going To California”, among many others. I’m going to talk seriously about lawns this evening. Here I am surveying the tiny lawn in the “way back”. It hasn’t been watered yet this year, and it’s starting to look sad. The bunnies have been peeing on it, too; that’s what all the dead spots are.

He remembers something of that sort in the movie “My Dinner With André”, which is one of his favorite movies, and one of his cousins spent some time at Findhorn years ago, so, well, I don’t know how to finish this sentence.

This little lawn has been shrinking every year, like a lot of lawns across the country. The guy I live with put it here because he couldn’t think of anything else to do with this area. How lame is that?

For years, it was my buddy Slipper’s private lawn, because no one could see him pooping there. He was shy about that. I’m not.

The guy I live with thinks lawns are fairly weird, and peoples’ attitudes toward them even weirder. Since we’re on watering restrictions, he says it’s time to get rid of this little lawn and put something else in its place. And anyway, this green lawn, even as small as it is, looks slightly ridiculous in a dry climate. The late Christopher Lloyd said that patches or strips of green grass gave a garden a hectic look, and the guy I live with agrees.  He has some ideas for replacing the lawn; I can hardly wait to see them brought to fruition. (I bet nothing will happen for years.)

Well, today, he spent some time filling in bare spots in the other lawn, the one in the front part of the back yard, and that’s what I really wanted to talk about. This is the guy I live with’s idea of what a lawn should really look like. (The green things that look like weeds are sphaeralceas.) The grass is mostly blue grama, which he says needs watering about once a month if it doesn’t rain, which, considering the way things have been going, we can be fairly sure it won’t. And he can plant paintbrushes (that is, species of Castilleja) in the grass. There are already some there. Or so he says.

The dark brown spots you see are cow poop. He spread some seed today. The first thing he did was spend about an hour looking for “the big scoop”, an item which I believe does not exist. He never found it, which is why I think that. So he used “the little scoop”, or, as I would call it, “the scoop”. He mixed some binder into a bag of cow poop. 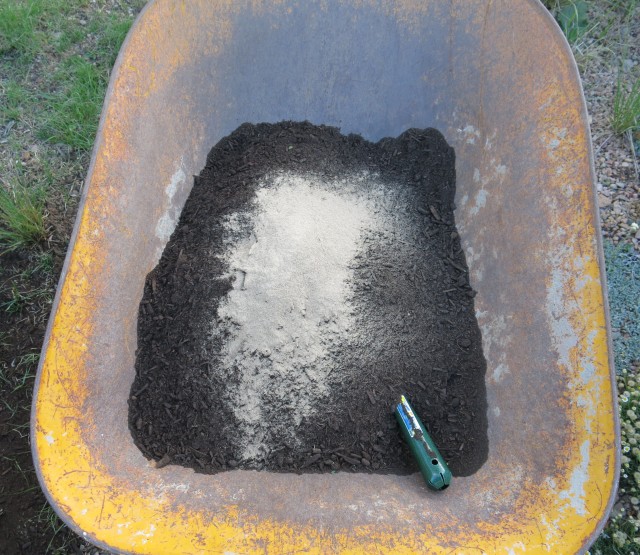 That’s probably too much binder, but I didn’t say anything. Binder is a natural glue, made from plantain I think, which he gets from Plants of the Southwest. It keeps the poop and seed from blowing away. He sprinkles the seed on the ground, waters it in with a watering can, then spreads the poop over the seed, using the scoop.

The guy I live with spent some time trying to figure out how to get open the bag of blue grama seed. 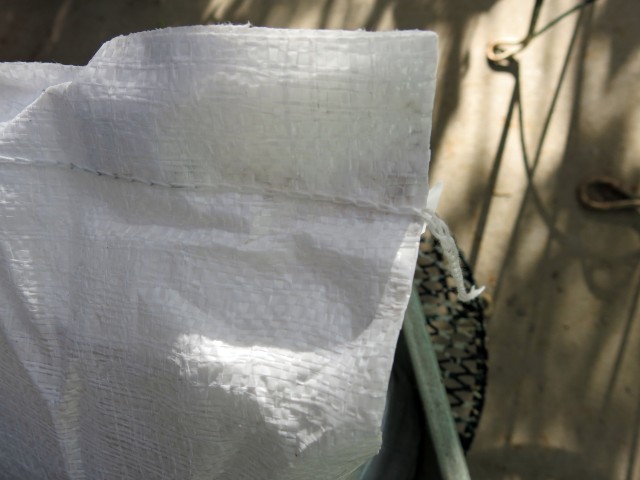 He said there’s usually one string that you pull and the sewn strings just pull right apart, and the bag comes open. He’s never found that one string. (I’m wondering if this is a metaphor.) He finally got out his pocketknife and just cut through the string. (Maybe another metaphor.)

When he finally got the bag open, the whole project took about ten minutes. So, an hour looking for an imaginary large-sized scoop, and about half an hour trying to channel the spirit of Leonardo da Vinci so he could get to the seed.

The lawn, or, as he calls it, “the grassy area”, also has Artemisia frigida, gaillardias, and several other native grasses he’s growing to see how drought-resistant they really are. The bare spots were supposedly caused by me tinkling on them. When all else fails, blame the dog, right?

The seed should germinate in a few days. The guy I live with says he’s going to sow buffalograss seed along both sides of the “temporary” gravel paths he put in so I “won’t track mud into the house”. It’s a matter of opinion as to who really tracks in the most mud.

I’m going into the house now. I hope you enjoyed this post on our two lawns.

idle
View all posts by paridevita →
This entry was posted in Uncategorized and tagged blue grama. Bookmark the permalink.

9 Responses to serious talk about lawns