Greetings and salutations, everyone; yes, once again it is I, Mani the pretty normal-sized purebred border collie, filling in for the guy I live with, and here to bring you the latest news from our garden. You may remember me from such posts as “Mostly Iceless”, among so many, many others.

He talked a lot about how the nine years were not at all what he expected them to be, and how he never expected things to be the way they are now, and that there were lessons to be learned from all of this, but I kind of stopped listening.

So most of the last several days has been filled with me doing things, with a bunch of talking in the background.

Something useful actually did happen today, when this was brought home.

This is a flat of pots of Dog Tuff grass, which is going to be planted in the “way back”, and is supposed to be tough enough for me to run back and forth on it a lot, and it still grows. The buffalo grass didn’t really do that, but then, it was put in when Chess was here, and Chess wasn’t much of a leaper and racer, unlike me. And, yes, it’s Bermuda grass, though I think it comes from South Africa, which is pretty weird. I mean it doesn’t come directly from South Africa, it was grown here. You know what I mean, I hope.

The guy I live with said it was “kind of green”, but I guess we can live with that.

Well, so, while all the talking was going on in the last several days, and looking at the grass right there, it might be a good idea to reveal the “super genius” idea that the guy I live with came up with. He hasn’t trademarked it or anything like that.

What he said was, oh, you might look at a couple of garden pictures first to get ready for it…(these are huge files which you can embiggen if you want). 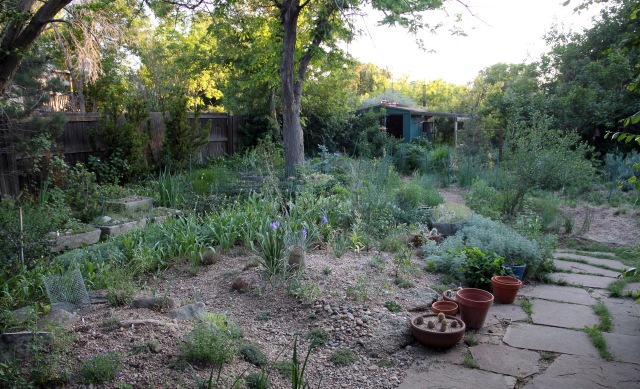 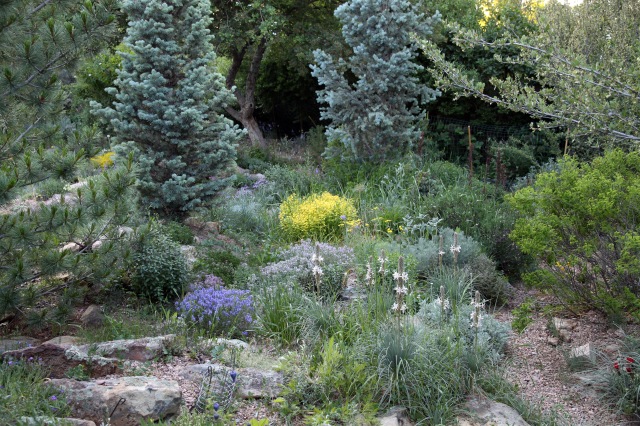 If you did embiggen the pictures, you may notice that there are an awful lot of weeds in the pictures. Especially grass. The smooth brome that the guy I live with talks about all the time.

He said (get this) that he might write a gardening book in which weeds are simply considered part of the garden. He hasn’t come up with a fancy term for this style of gardening, but he says it’ll probably catch on quickly. This is, after all, the weediest year he’s ever seen.

I looked more than a little dubious when he suggested that I mention this in the post. (The “super genius” bit was very hard to swallow, too.) This is me looking dubious.

So that’s the new plan.

I almost forgot to show the sea kale (Crambe maritima). It’s flowering now. I guess the reason I’m supposed to show this is that there are two plants here, and both got eaten last winter. Right down to the ground. It turns out that the guy I live with and I totally disagree on the edibility of kale. (It was pretty good.) You can see a weed there, too. See, the plan is already in place.

I guess that’s it. I feel kind of weird telling you what the guy I live with says is a “super genius idea”, but I did anyway. We’ll see how successful this turns out to be. 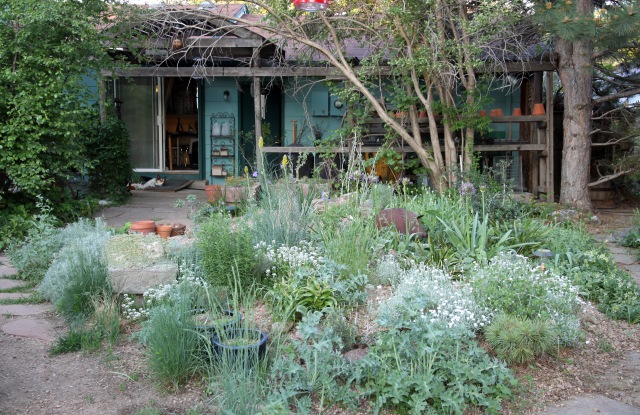 17 Responses to the super genius