Greetings and salutations, everyone; yes, once again it is I, Mani the purebred border collie, filling in for the guy I live with, and here to bring you up to date on the latest news from our garden. You may remember me from such posts as “Before The Deep Freeze”, among so many, many others. 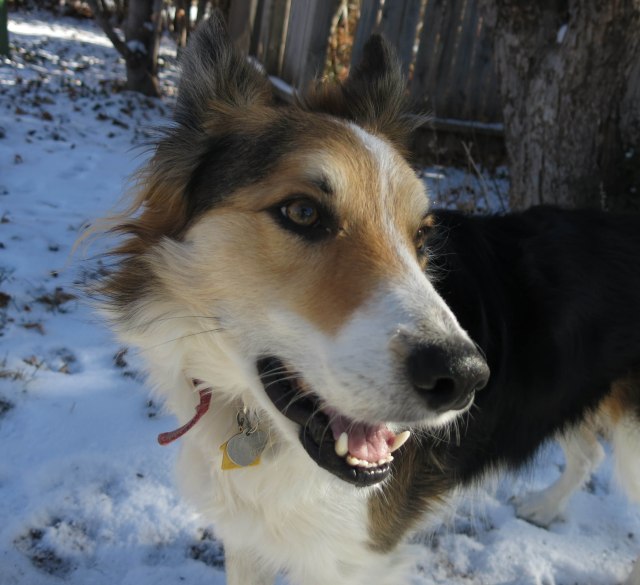 The other day, the guy I live with said the weather forecast called for very cold weather, and snow. Like say eight below zero this coming Tuesday. He was getting all depressed and feeling claustrophobic, the way he does, about the coming of cold weather, but it turned out that the forecast was revised to be not very cold at all.

You can see that it snowed. About half an inch.

I guess we’re the only ones going on walks at this time of  year. 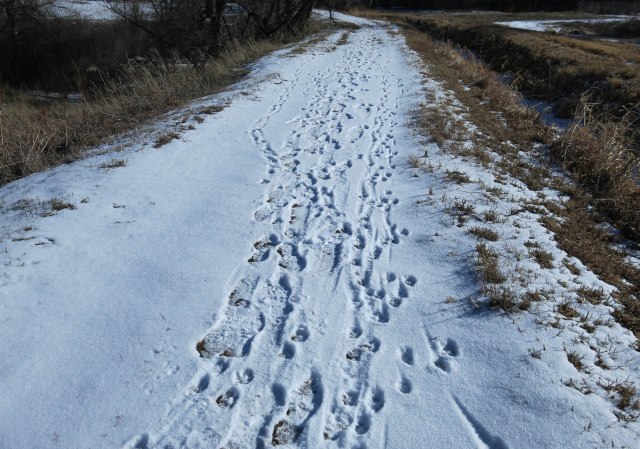 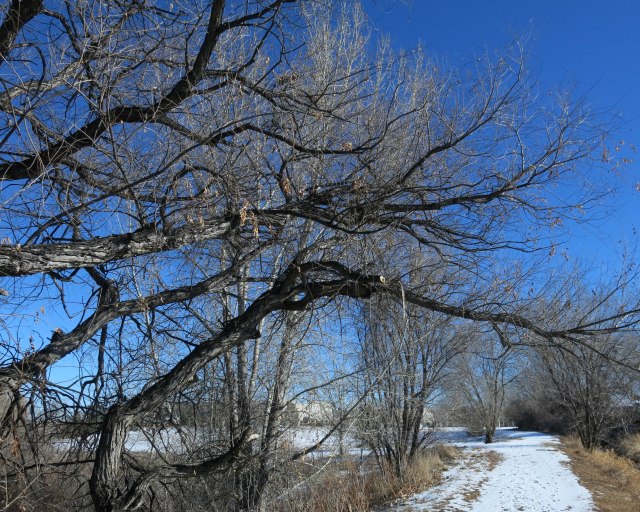 He said that one thing about this time of year, which he noticed when he worked outside, and maybe noticed it much earlier than that, was how quiet and peaceful it was. With everybody on vacation or out shopping, things seemed very calm. That was one of the nicest things about the end of the year. 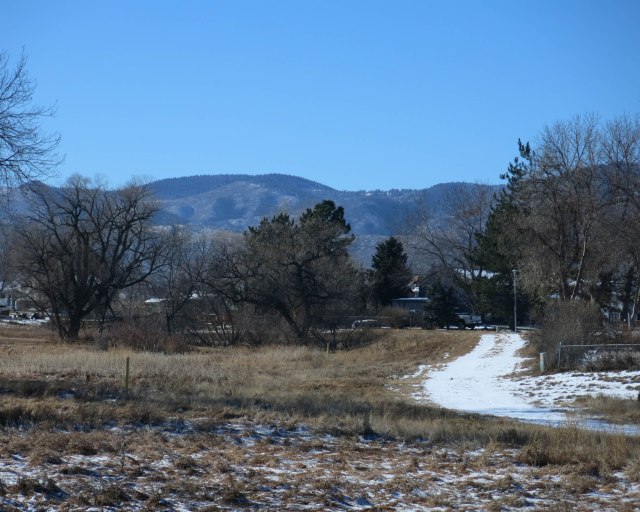 Just a little while later, this cloud appeared. Maybe you can see how it’s being blown by the wind, from the Continental Divide. (The highest part of that is just thirty miles to the west of us.)

Then it changed into something else.

Almost the first thing after we get up, the heater in the bird bath is plugged in. The guy I live with said this water was bird water and that I shouldn’t drink it. He doesn’t know anything, of course.

The water does get changed from time to time. 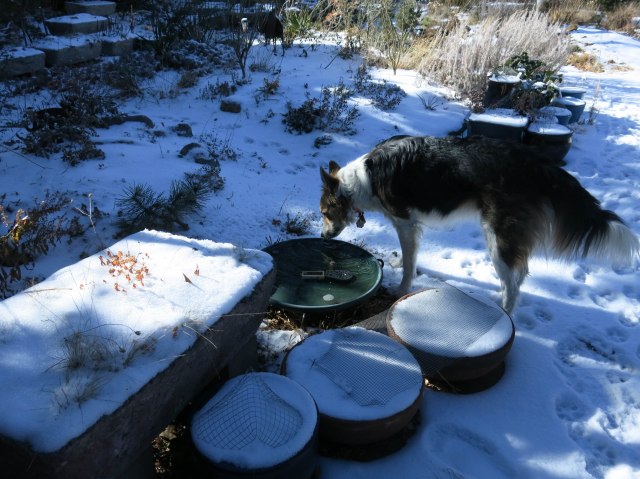 Things have certainly slowed down in the garden. 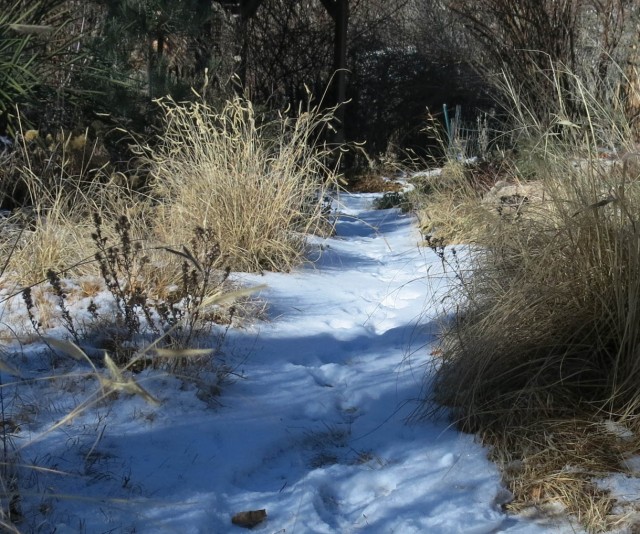 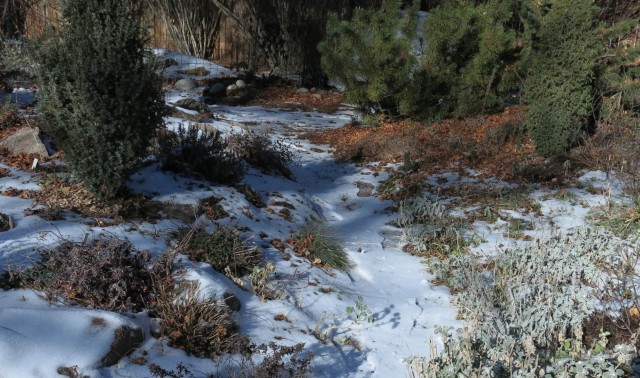 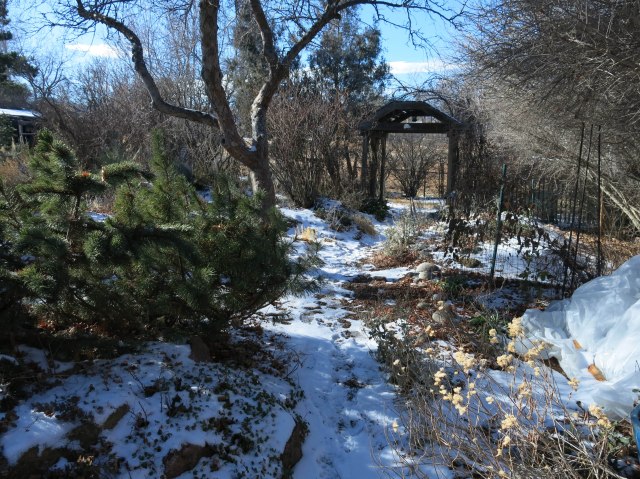 The studio downstairs is even quieter. It used to be full of life. The room is unheated (no register), so it’s always cool in the winter. Quiet, smelling like old books and incense. The guy I live with likes this view. It’s the same as the one above. 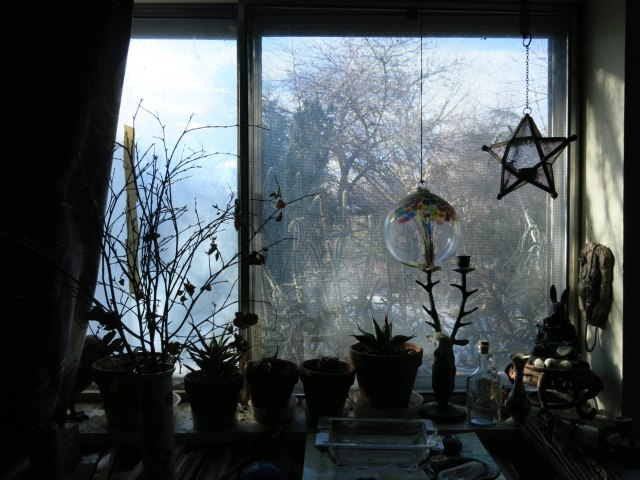 The only place where anything is happening is in the Snowdrop Frame, which you can see in the picture above. The frame doesn’t prevent the snowdrops from freezing; just keeps them at a slightly warmer temperature than outside.

You can see one flowering here; not quite open. That’s ‘Daphne’s Scissors’. It has a scissors mark on it, on the inside. There are some snowdrops in the actual garden but they’re a little chillier and so aren’t nearly as open. The frame is in full sun all winter, and shade in the summer. 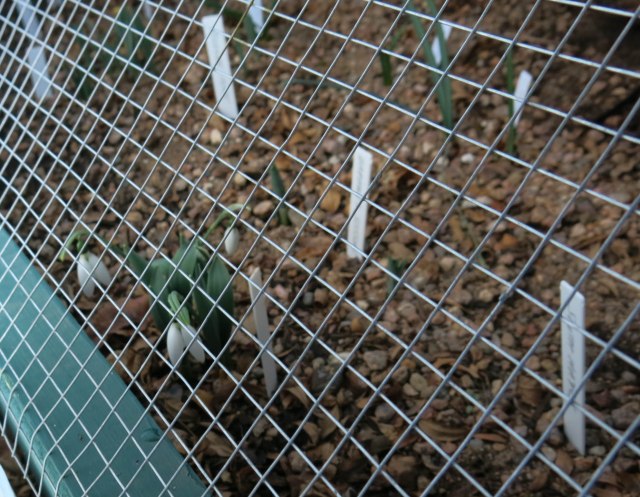 He did order some seeds, from Alplains, and when they arrive we’ll talk about them a bit more. He said that not ordering seeds would eventually make him unhappy. You know, the way you think you’re not going to do something this one time, and then when you look back, you regret not doing it.

And, even though I prefer not talking about this at all, there will be a seasonal picture of yours truly in a couple of days. One was posted on Facebook but this is different. I don’t know why we have to go through this. The guy I live with says “Because”.  He doesn’t say that very often.

So, that’s it for today. It didn’t get as cold as they said it would. Not that it mattered anyway. The Pottery Barn sheets are very soft, and this room is really cozy. 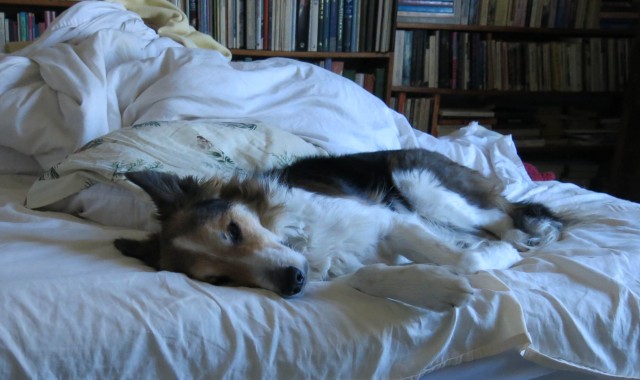