Greetings and salutations, everyone; yes, once again it is I, your popular host, Mani the purebred border collie, here to bring you up to date on the latest news, which really isn’t all that much. You may remember me from such posts as “Biscuit Time”, among so many, many others.

I know I haven’t posted for a while, but as the guy I live with would say, this winter has been endless. Not only endless, but endlessly endless. It got down to six below zero last Sunday night (that’s -22C), with snow, and it’s supposed to snow again this week.
Temperatures have been below normal here since the middle of November; the guy I live with has not been able to work in the garden for a third of a year. He has other things to do, so he’s not as put out as you might imagine. But this winter does seem extremely endless.

Yesterday was nice, though; the sun was out, and it was pretty warm. Today was okay, too. We can tell if it’s going to snow because the weather gets nice for a day or two, and then it snows.

The ice along the paths is really thick.  The guy I live with sprinkles sand on the ice, and I guess the sand heats up in the sun, and helps melt the ice. I know that sounds kind of weird. 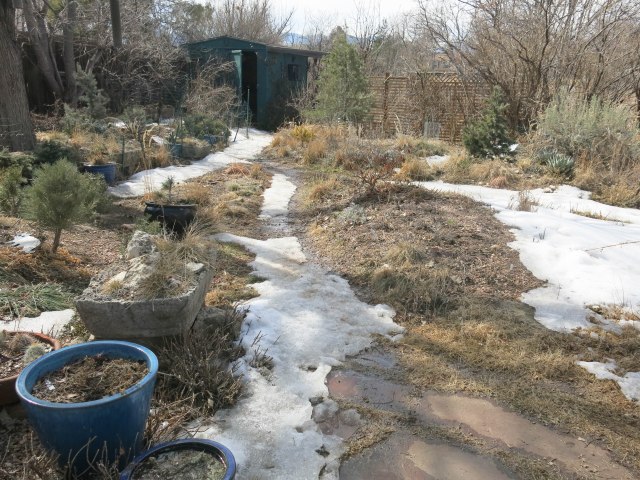 Today I found a couple of warm spots to lie in. The flagstone was really warm. 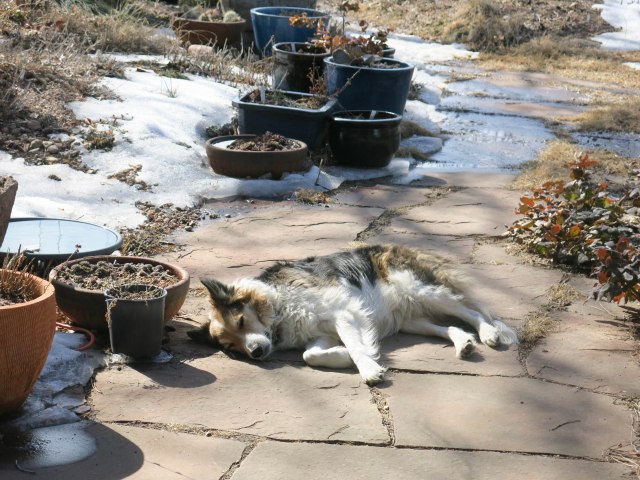 This is just about the warmest spot in the garden. In fact the bulb frame heats up so much that the plastic has to be removed to let out the hot air.

Some crocuses finally started flowering. Everything is late this year because it’s been so cold for so long. If you look at the post I mentioned, “Biscuit Time”, you will see how late things are now. This is kind of an overexposed picture of Crocus chrysanthus ‘Snowbunting’, with a visitor.

My walks have been pretty good, except for last weekend when it was really, really cold. We still walked then but I got ice in my paws and the guy I live with thought he was going to get frostbite. He didn’t.

There are still voles to look for. I haven’t found any yet, but it’s fun to look. 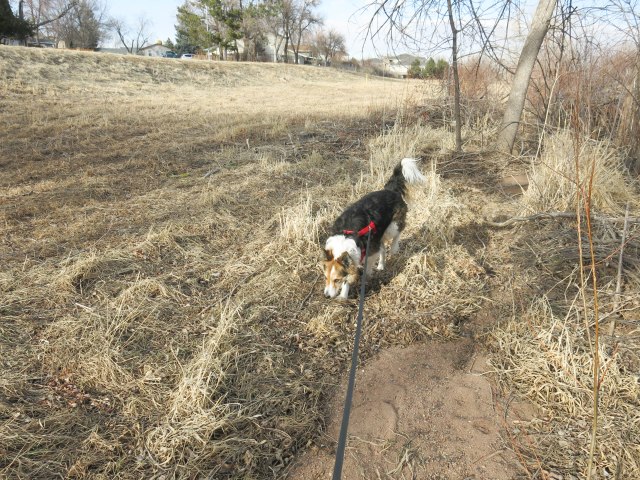 We haven’t seen the owls in a while. The guy I live with said that the female is sitting on a nest somewhere, or that there are even baby owls now. I hope they stayed warm last weekend. We can hear them hooting, and there are pellets everywhere.

This afternoon we walked under this kind of gnarly willow.

Someone had made a home in it. It’s too small for an owl, but maybe a woodpecker.

And that’s really all I have for today. At least we remembered to set our clocks forward.

36 Responses to the endless winter