Posted on November 4, 2012 by paridevita

I’m not sure what possessed me to hang a bird feeder in a place where squirrels could get to it so easily, but the situation has been corrected now. My intention, the other day (previous post), was to take a picture of the willow aster in full bloom at the base of the pole where the feeder was hanging, but I got distracted by the sheer stupidity of what I’d done.

The plants have been here for a couple of years and bloom very late. I suspect that they’re only happy because I’ve been watering this part of the garden a lot, to make up for it being smashed flat earlier in the year, when the fence was installed. A nursery person told me that customers are wary of plants that bloom very early and very late, which is bizarre. (If there were ever anything to convince me I’m surrounded by weirdos this would be it.) Why would anyone not want flowers in November?

Incidentally, I looked up Symphyotrichum (not a new name, but one proposed in 1832), read all the business about the segregation from Aster based on molecular phylogenetics, which seems all very well and good, but they could have chosen a name easier to type.

Back to stupidity again, I checked on the progress of my tree wisteria. Looking good, I must say. 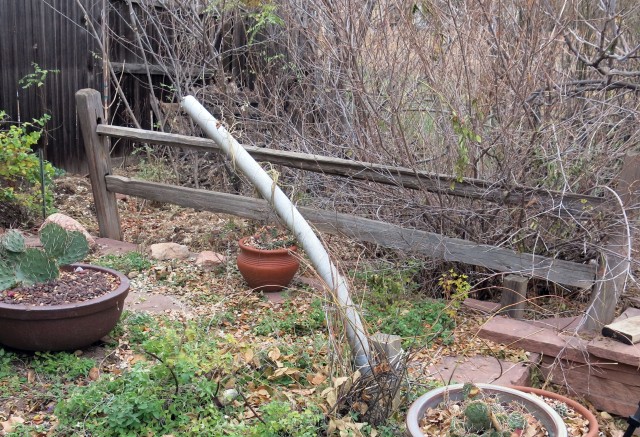 wisteria ‘Aunt Dee’ turning into a tree ….and yes, those fence posts are my interpretation of “upright”

This wasn’t the original plan here; I think there was supposed to be a little pergola with artistic stuff all over it and clusters of wisteria flowers drooping down, but this is what I was left with, so I decided to make a tree wisteria.

They (you know, “they”) say that you take a cardboard tube and twine the wisteria up the tube, so that, after the cardboard disintegrates, the stems have formed a trunk and you have a more or less instant tree wisteria. No one said anything about what happens when it snows on the cardboard tube.

Kitty-corner from that, there was a Chinese lilac that I got tired of, because it bloomed for a week, then got covered with powdery mildew and looked gross for the rest of the summer, so I cut it down (but didn’t chop out the roots, so as you can see it’s still there, and looks worse than ever), and planted, in an area of about 20 square feet, a pinyon, a Woodward juniper, an Arizona cypress, two Gwen’s buffalo currants (not one, but two), and a ‘Banshee’ rose. 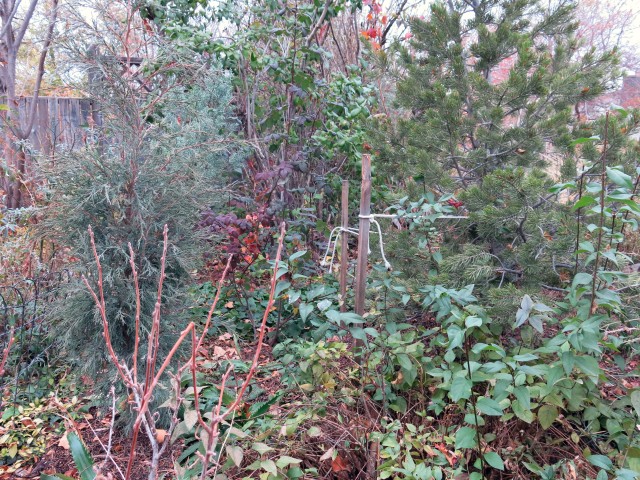 I am going to dig up the rose to give to a neighbor. That will fix everything.