It’s finally spring. Spring is here at last. It’s supposed to snow in a couple of days.

Six dead agaves.  The Agave havardiana on the left sailed through -18 last winter, but this past winter was easily the worst I’ve ever seen in the garden here. Only the little Agave lechuguilla, on the right, is still alive. This doesn’t bother me. 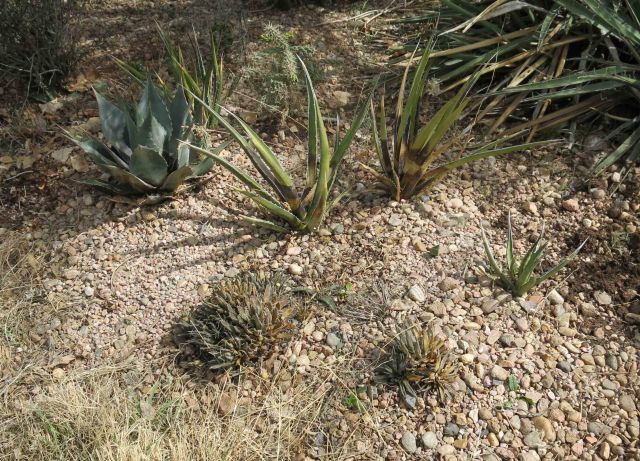 I didn’t like the way this looked when I stared out the living room window. I stare out the window a lot, so I had to look at it a lot. Might have been the feng shui, might just have been the dumb way I planted them. They were (well, they still are) in sand and gravel and all that “drainage” stuff that people who think gardening is all about plumbing talk about. They were also covered with snow for three months, and the Agave polianthifloras in front were mowed down by rabbits who apparently mistake them for artichokes.

When I tug on the centers, the leaves just fall apart.

Not only dead agaves, but dead conifers too. 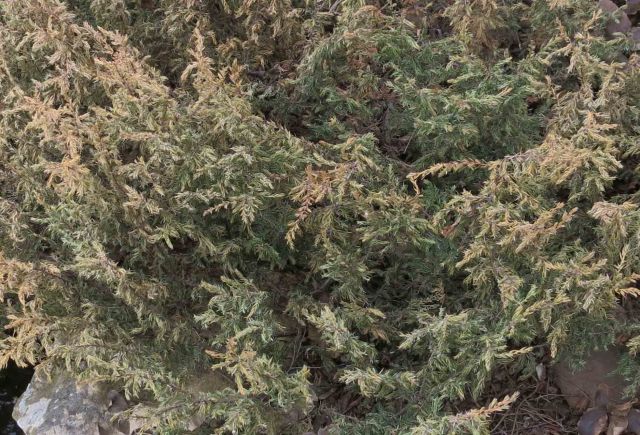 This is, or was, the ‘Effusa’ juniper; growing happily here for about twenty years, but now entirely and completely dead. I thought it was attractive; it hung over the pool which I’m going to fill with broken pieces of flagstone and then cover with dirt, but the juniper looked too “montane” or something.

Today there was a crevice garden workshop at Timberline Gardens; I went, and stopped at the workshop for a bit. It looked pretty good, but I rarely do what I’m supposed to (like my dog), so I wandered around the greenhouses.

This opuntia is  attractive. I don’t know if it’s hardy, and even if it is, if I planted it in my new garden it might make the house look like a Mexican restaurant. Not a bad thing in itself, but not quite what I’m after. Besides, opuntias get these sucking bugs which are extremely annoying, and make little holes in the pads. (A capful of Dr. Bronner’s castile soap to a quart of water, sprayed, will do them in. I don’t do that, though.)

My three plants of Cupressus arizonica ‘Compacta’ are completely brown, but not dry; I don’t have very much patience with this behavior but I should have wrapped them with burlap for at least three winters. Arizona cypresses are perfectly hardy here but they need a little time to settle in, and get used to the wind.

The front bed this afternoon. A couple of changes have been made, one not very subtle. I moved Grusonia (Opuntia) clavata, the club cholla, into the new bed from further out in the garden because I didn’t like the way it was looking at me when I stared out the front window. Now I can’t see it. The vicious white spines give me the creeps.

I wasn’t in the mood to spend hundreds of dollars for a trunked Yucca faxoniana which I couldn’t lift anyway, so I settled for a trunkless one. It was the only one there, too. The fact that it will have a trunk eventually, maybe in a hundred years, is good enough for me. 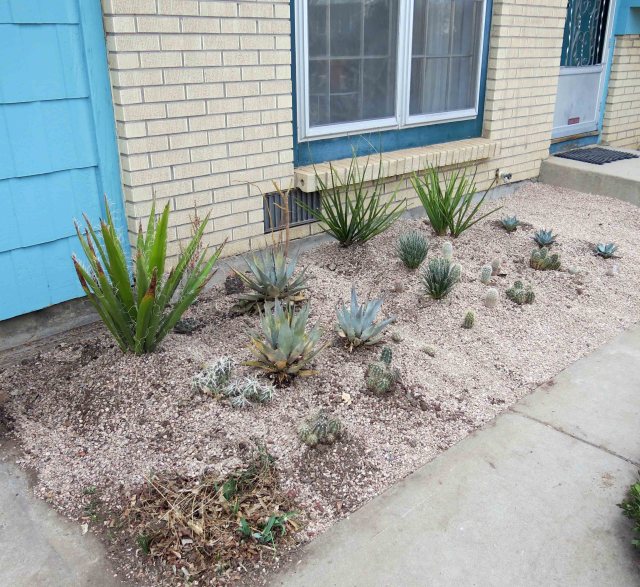 idle
View all posts by paridevita →
This entry was posted in Uncategorized and tagged Cupressus montana, Grusonia clavata, Yucca faxoniana. Bookmark the permalink.