Greetings everyone, once again it is I, Chess the purebred border collie, here to bring you the most enjoyable posts possible. You may remember me from such posts as “Making a List” and “Trials and Tribulations”. Those were truly outstanding posts, if I do say so myself. And of course I do.

Here I am looking charming and agreeable in what the guy I live with thinks is a lawn. I sometimes wonder about him.

And here I am looking the other way. You can see there is some grass here; buffalo grass, which according to the guy I live with makes it a lawn. 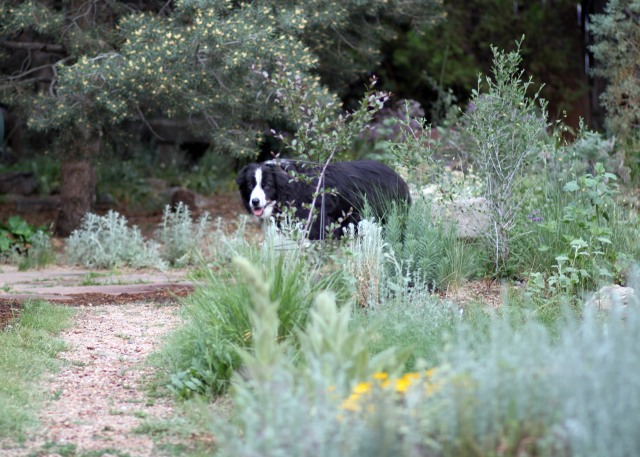 Well, so much for lawn talk. Yesterday, as the title of my post suggests, the humidity got down to three percent at about two in the afternoon. That’s drier than even Death Valley was yesterday. Three percent humidity is what you might call dry. It was windy, too. I didn’t like it very much but the guy I live with, who’s pretty nice to me, hosed me off twice yesterday.

I wondered what would happen when the humidity got to zero. Or lower. Could you, like, owe humidity? If you turned on the hose, would the water just disappear? These are the sort of things I think about. I like the hose a lot.

Today there was smoke from the fire about sixty miles to the south of here, and the humidity soared to a muggy nine percent, and I was still hot. The guy I live with wanted to call me a hot dog but I didn’t think that was wildly funny. I like hot dogs. When my buddy Slipper was sick, the guy I live with made a kind of paté out of cooked hot dogs, hardboiled eggs, and cheese that was really good. I got to eat a lot of it even though I wasn’t supposed to. I also liked the rice swimming in chicken fat and our regular food drizzled with sardine juice. The guy I live with is quite a chef.

Sorry, I started out okay and then got distracted by my favorite subject. You know, food. The guy I live with was supposed to open the present he got for me the other day but he got distracted, as usual. I showed a picture of what he did the other day. 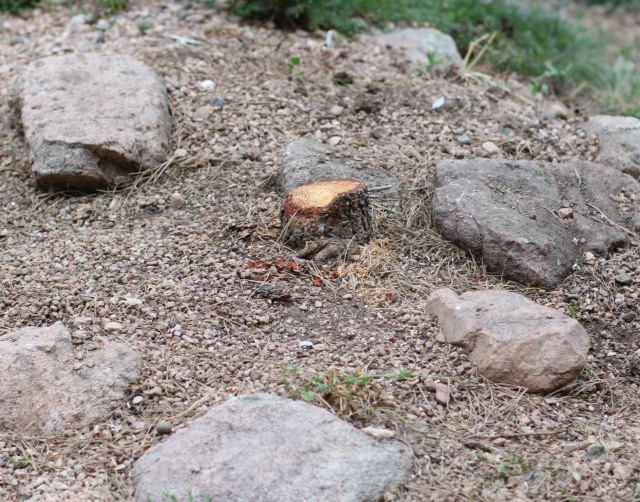 And today, he did this. Those ropy things in the upper right are branches of Daphne alpina. He says to say “from Archibald seed”, which apparently adds class. We always seem to be needing to “add some class”. I’ll have to think about that one for a while, because he has me, a purebred border collie. The daphne was being pushed into one of the paths by the mugo pine which was growing too big for its britches. I didn’t know plants had britches but the guy I live with says they do. He says it’s mystical. That’s his explanation for a lot of things. 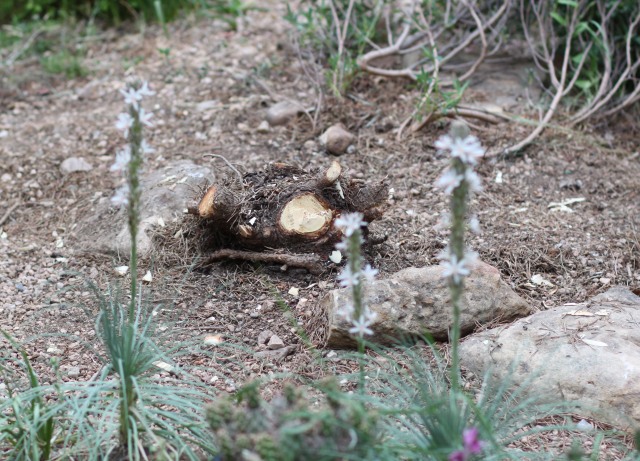 So, he has room for more plants. Amazing how that works.

Here are a couple of cactus flowers. (Remember I have to show flowers if I get to use the computer.) He could have taken this from the other side of the plant but he says that was too much trouble. So there’s a branch in the way. (It’s Atriplex gairdneri.)

Here’s one of those fancy echinocereus hybrids. The flower really is this color, he says, with tints of purple inside.

What else? Oh, in the rolling-your-eyes department, which the guy I live with does almost every time someone talks about drought and watering restrictions, you’re allowed to water container plants. This is his idea of what container plants in Colorado should be. 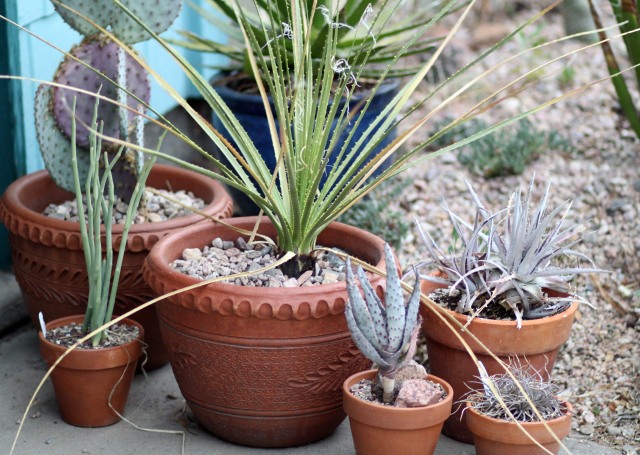 True, the dasylirion  (Dasylirion acrotriche) isn’t quite centered in the pot, which kind of detracts from the sense of pure horticultural enlightenment here, but no one is perfect. In fact, these pots are on the driveway. That seems a little weird to me, but the guy I live with says it’s progressive.

Whatever he says, huh. I’ll say goodbye, for now.

idle
View all posts by paridevita →
This entry was posted in Uncategorized and tagged echinocereus. Bookmark the permalink.