bunnies on the grass, alas

Hello everyone. Once again it is I, Chess the purebred border collie, filling in for the guy I live with, who says he’s bored. You may remember me from such interesting posts as “My Garden in Spring” and “Wright’s White”, as well as a host of other equally fascinating contributions to the literature of gardening and the experience of being a purebred border collie.

Here I am attempting to look at ease.

It’s the Fourth of July and people are shooting off firecrackers even though it’s against the law and it’s scary, and there was thunder earlier, so things aren’t as great as they could be. I’m going to try to talk about grass, since it’s boring, and that might calm me down some.

The guy I live with seems to be preoccupied with boring stuff. I guess if he’s bored, he might as well bore everyone else, huh? First, look at what’s happened to the grassy path in back. 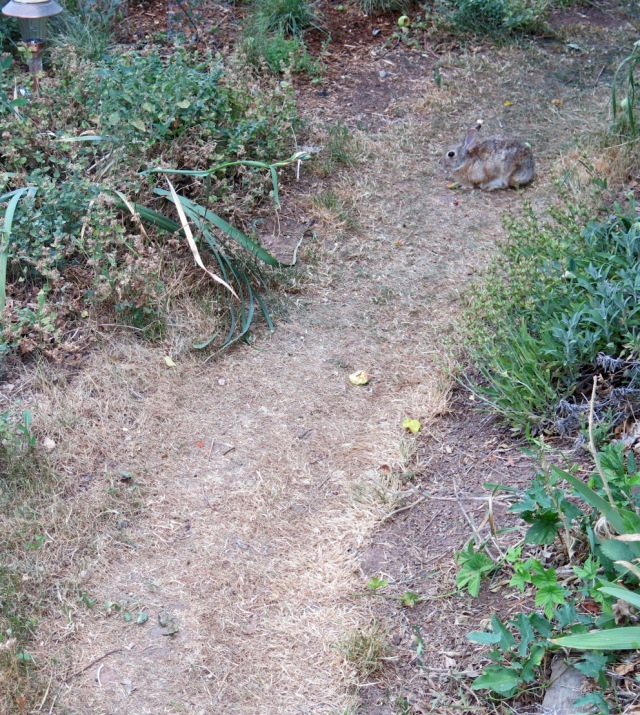 He hasn’t watered it, and it looks pretty dead. He told me today that dead grass in the summertime makes his heart sing, or at least as much as it can since my mommy passed away. Isn’t that strange? He explained that it reminds him of being a little kid and his grandpa’s garden in Los Angeles and how dry the grass got in summer, and that still seems like the normal way of things to him. I know, it’s weird. He’s never lived in a place where he didn’t have to water. He says he’s going to replace this with a mulch path. I don’t know what that means.

Bunnies on the grass, alas. Very clever, huh? “Pigeons on the grass, alas” is from Four Saints in Three Acts, an opera by Virgil Thomson with words by Gertrude Stein. I bet there are people who don’t know that, but I, a purebred border collie, do. The guy I live with talks all the time, so I pick up things. My mommy would just roll her eyes when she heard things like that, though she liked the music of Virgil Thomson. The guy I live with isn’t so enthusiastic about it, but he bought her a record of it when she wanted one. I’m not sure what this has to do with anything.

Anyway, except for a miniature lawnmower at one end, the front lawn (in the back yard) is looking pretty good. I mean if you think this is a lawn. The guy I live with says this is a “progressive” lawn. It’s not making as much progress as he thinks. 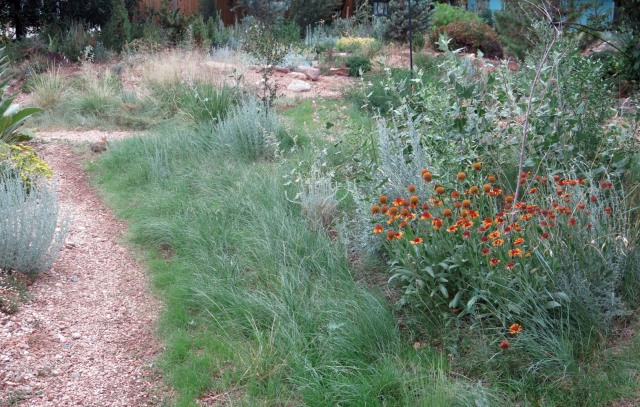 That’s new grass, blue grama, on the right of the path, which is why it’s so short. It has to be watered, since it’s new, and the guy I live with was mildly irked that he used 7,000 gallons of water in June. He read somewhere that the average suburban home uses 10,500 gallons a month, but the guy I live with prefers to be below average. (Yes, I said that on purpose. Border collie humor.) He was going to save water by taking a shower once every two weeks but I told him not to do that. Fortunately he agreed and takes a shower every day, and I get soaked with the hose almost every day, because I get hot. We purebred border collies do not care for hot weather. Or thunder. Or firecrackers. Or posting about dumb grass, for that matter.

To make this an even less interesting post, the guy I live with said to post this picture of a grass. It grew and grew and he thought it was something else, and it turned out be not that at all, but another something else, which he claims is wolftail, Lycurus setosus. 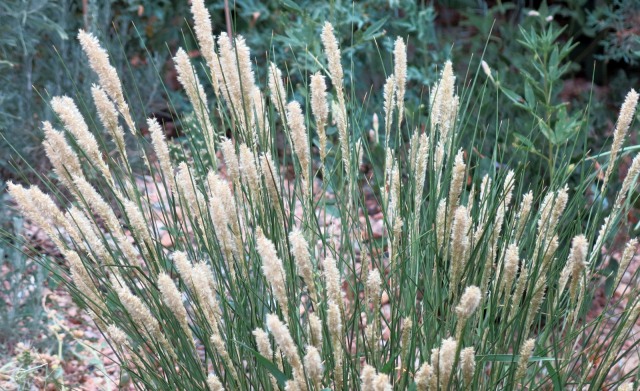 I guess if that’s what he says it is, it must be that. He’s really excited about it. He thought and thought about this (it was interesting to see him thinking about this; his mouth was kind of open and he just stared at the grass and eventually said “Is that wolftail?”) and since it couldn’t be anything else, and he had seed of wolftail, he put two and two together and decided it was wolftail. He says that originally it was called Lycurus phleoides but apparently this is now a separate species, or something kind of like that.

Lycurus phleoides is said to be confused with Muhlenbergia wrightii but that grass has grayer leaves and the spikes are the color of lead. We have that in the garden, too. So he’s calling this one wolftail until someone tells him not to. Here’s a picture of L. phleoides from Hitchcock’s Manual of Grasses of the United States (the treatment is on the other page), but it might be L. setosus. And then again it might not be. This is really confusing. 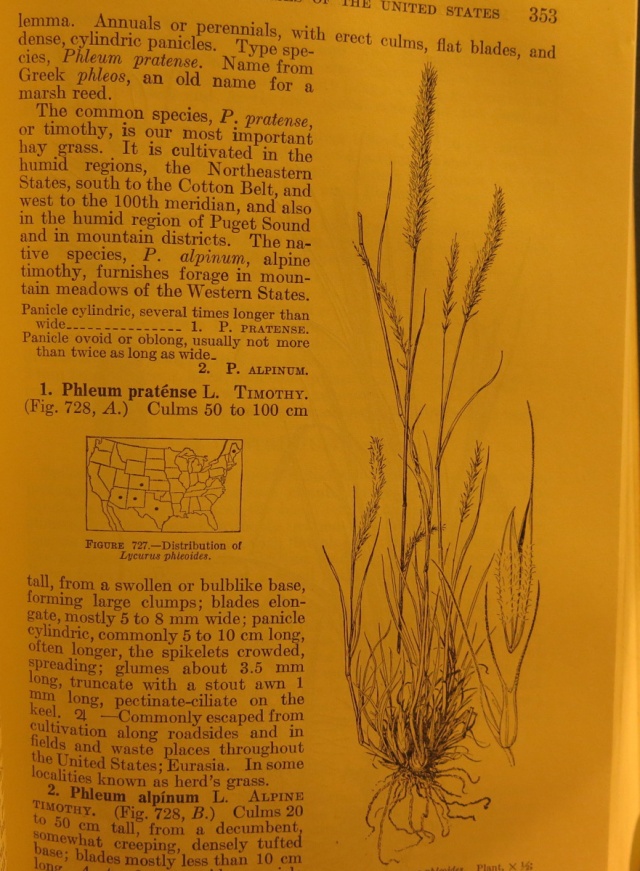 The book doesn’t lay flat the way it should which is why it looks all curvy. There are times when I just don’t understand the guy I live with at all. I mean, why not try to flatten the page a little before taking the picture? Or something.

Okay, so now you know he has wolftail in the garden. It won’t be on the news or anything.

I think it’s time to go now. This was even more boring than it sounded when I first started.

idle
View all posts by paridevita →
This entry was posted in Uncategorized and tagged Lycurus setosus. Bookmark the permalink.

5 Responses to bunnies on the grass, alas