Greeting everyone, it is I, Chess the purebred border collie, here once again to provide you with endless delight. You may remember me from such noteworthy posts as “Mister Always Right” and “He Fixes Something”. Here I am in a characteristic pose. (I have a lot of characteristic poses.) It was another hot day, with scary thunder, and some rain, and so the humidity soared to 31 percent, and the guy I live with was very disgruntled. 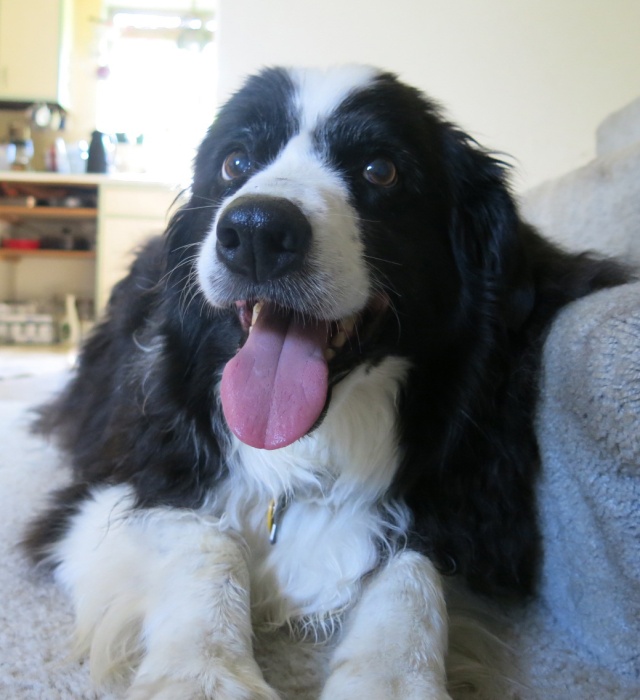 It was like a steam bath on our walk, but I had a good time anyway, because even though I got left alone again so that the guy I live with could go to Boulder, to Harlequin’s for yet another one of those “horticultural emergencies” that seem to pop up at without any warning at all, he stopped at Only Natural Pet and bought me an undercoat rake which allowed him to rake out a whole bunch of my undercoat so I’m not so incredibly hot. The rake is made by Safari and this is kind of a plug for it.

Anyway, by popular demand, we’re going to show pictures of the front yard. I’m not really familiar with any of it so I’ll let the guy I live with tell me about it, which if you think about it is kind of like a story by Borges, a bizarrely circular situation, but then so many things about our life here are.

What I suggest is when you look at pictures of the front yard, you have in mind images of photographs of gardens published in gardening magazines, and compare those with what you see before you. And, yes, to tell the truth, most people do walk right through the front yard in complete silence. The light was weird, too.

If you look really closely at the roof, just to the right of the vent pipe, you can see a spot of blue the same color as the house. That was where the guy I live with spilled a whole roller pan of paint on the roof. He thought it was really funny. My mommy didn’t. She used to laugh at and with him a lot, but not when he did this.

Not too many plants are added to this garden, because, since it’s not watered, the soil is extremely dry, and keeping young plants alive is very difficult, unless they’re planted late in the year, even as late as November. The exception is warm-season grasses, which make no root growth at that time, so they have to be planted early.

The oak and single-leaf pinyon (Pinus monophylla), to the right of the window, are planted in a small central “island” which is made an island by the fact that there’s a path all the way around it, except that the path is blocked on the north side, because of lack of maintenance.

This is the path on the east side, looking north.

A little further along the path. The oak, Quercus undulata, on the left, and Juniperus monosperma on the right. Another oak, Q. gambellii, is at the end of the path.

The juniper up close. 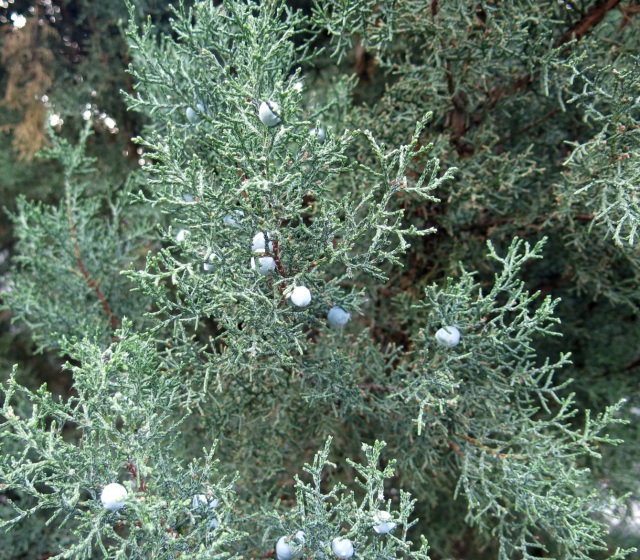 Looking back the other way, with the ultra-rangy little-leaf mountainmahogany, Cercocarpus intricatus center left. It was supposed to be pruned this spring, but the guy I live with’s imaginary gardening assistant, Tania, never showed up. She does that a lot.

Back through the path, looking south. Desert willow on the right. That’s the obligatory front lawn at the bottom of the picture.

When I say Cercocarpus intricatus is “ultra rangy” I mean just that. It can be pruned into a handsome upright shrub. The guy I live with says this is the “natural look”, if deer didn’t browse it, which they don’t, since there aren’t any here. 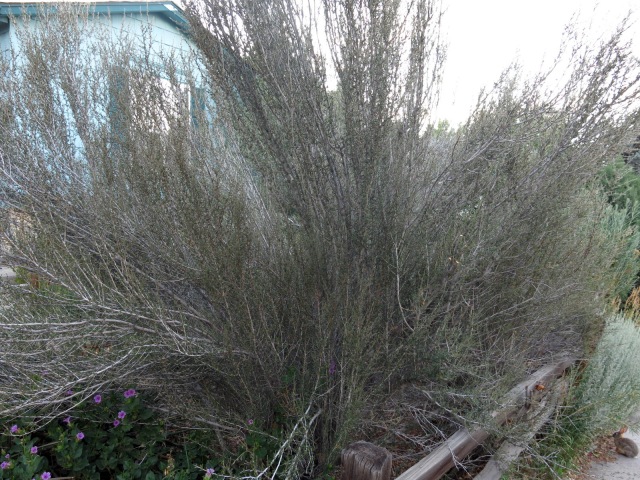 Yucca baccata and the desert four o’clock, Mirabilis multiflora. It liked all the snow in April.

Back on the other path, on the west side, closest to the house. Pinus monophylla, planted way too close to the oak, but the guy I live with says plants were meant to be planted too close together. I think he’s just making this up. 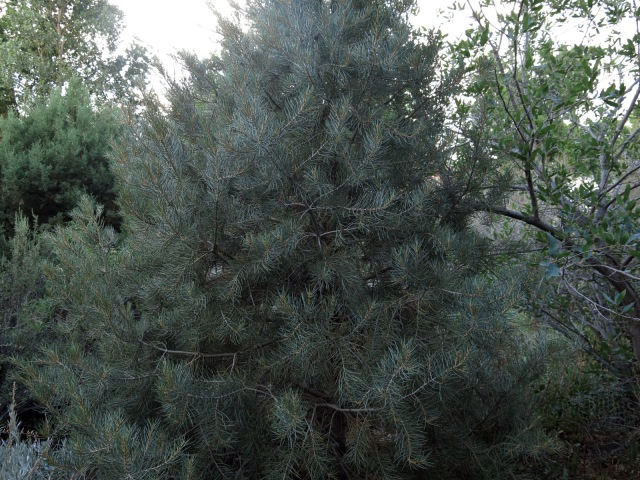 The squaw apple, Peraphyllum ramosissimum, starting to fruit, with Mahonia (Berberis) haematocarpa in front, and Artemisia cana completely blocking the path. The guy I live with doesn’t let people who pronounce Peraphyllum like it was spelled “Peraphylum” into the back garden. Or Chilopsis with a ch like cheese, either. Unless English isn’t their first language, then it’s okay. 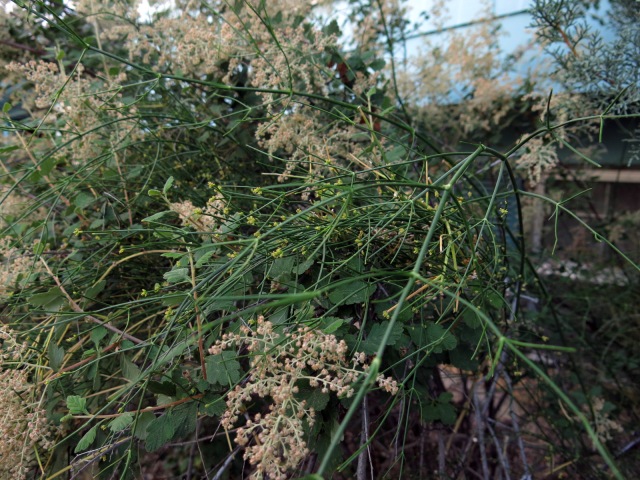 The woody trunk of the cholla, Cylindropuntia imbricata. Cactus do form woody trunks after a while. There’s some bindweed, too.

More cholla wood, this time on the white form of Cylindropuntia imbricata, the plant found by Mary Ann Heacock. In fact this is half of the actual, original plant, which she gave to him. He told this story before. More bindweed, too. There really isn’t very much bindweed in the front garden, except in the places where pictures are taken. Cheatgrass in lower left. It comes from the field in back.

Last picture, Arctostaphylos × coloradoensis (a name given to hybrid swarms of A. patula and A. uva-ursi ….strangely sometimes called A. nevadensis, which is a species from California), hugging the trunk of the desert willow, Chilopsis linearis.

Now maybe you can see why the neighbors think the house is abandoned.

That’s it for tonight. The fan is blowing cool air into the bedroom, and I can hardly wait to stretch out on my soft Pottery Barn sheets.

4 Responses to the front yard