Greeting and salutations, everyone. Once again it is I, Chess the purebred border collie, filling in for the guy I live with, who is busy staring at the floor again. You may remember me from such posts as “Still More Spring” and “Memory and Desire”, among other excellent contributions to English literature. Today I would say “here I am in a characteristic pose”, but the guy I live with thought this was funnier. Granted, it’s an excellent nose, and I bet the guy I live with is jealous, but this is no way to treat someone who helps hold down the ultra soft Pottery Barn sheets when the fan is blowing in cool night air. You can see the little scar, even. I forget how I got that. 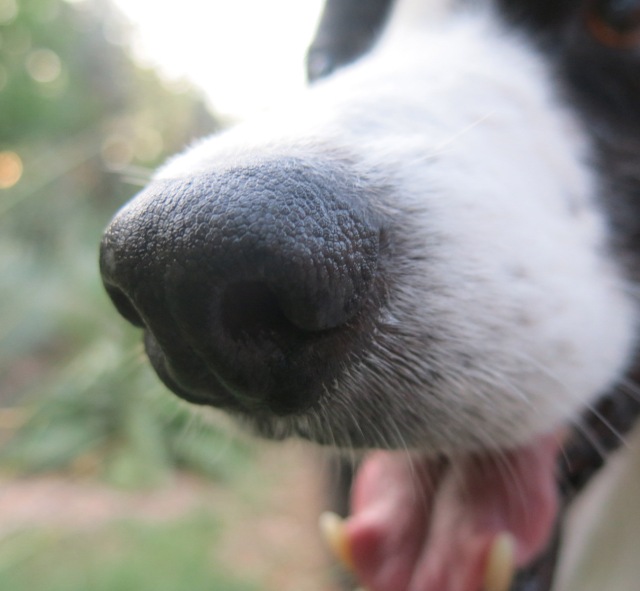 Okay, so I’m made to look bad already. The guy I live with did next to nothing today, and even blames me for us getting up at 9:45 this morning. Someone had to make sure the sheets didn’t fly off the bed.

As far as I’m concerned, this dolce far niente stuff if fine so long as I don’t get blamed for it. I’m a dog, and we don’t do much as a rule. Protect the house viciously when no one is home, hold down the bed sheets at night, give the guy I live with a reason to get some exercise by walking, and listen when he talks. I listen all day long. And we didn’t do anything today. Granted, he is retired, and in his declining years, but still, something could have happened today.

Oh, he planted a shrub. And he spread some burlap on the section of lawn in back where he sowed some buffalo grass seed. This is what it looks like. 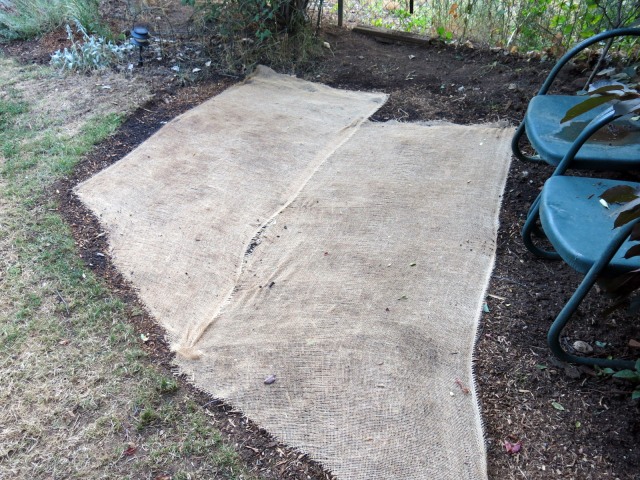 It took him two hours to do this. The burlap is so I can walk on it. It’s pinned down with landscaping fabric pins, which he pushed right into the ground, without having to hammer them. That’s how good the soil is back here. The grass can grow right through it, and the burlap will rot away, so the guy I live with insists, in time. I figure about six hundred years.

They call burlap “hessian” in places like England, but I guess here hessian is a bad thing, what with the Hessians during the Revolutionary War and all. But then the French are supposed to be bad, too, even though if it weren’t for them, we’d be saying hessian now instead of burlap. I don’t understand any of this. I say burlap. The guy I live with uses a lot of it, like he uses duct tape, rebar, and other gardening things.

Since I’m in the way back part of the garden, I should note that a most disgraceful thing is going on, and there’s nothing I can do about it. 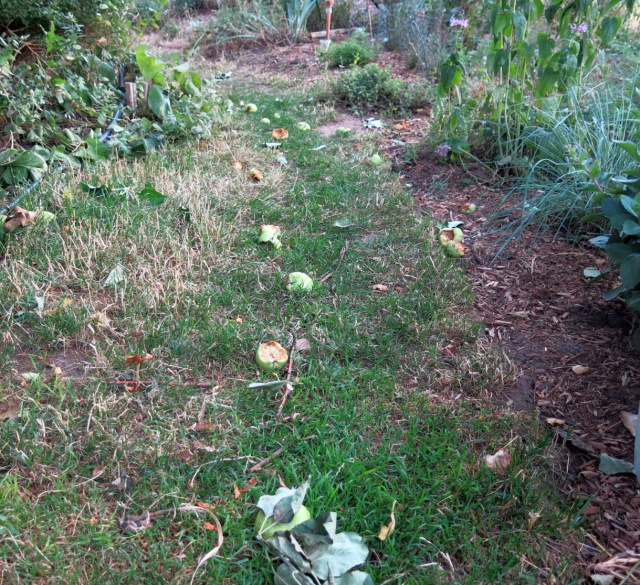 The squirrels are eating parts of apples, and then dropping them down onto the ground, without even caring if they might hit some passer-by, like me, right in the head. The apple tree was the first plant the guy I live with planted here, the way people start a garden and feel they have to include edible things. The apple tree is the only edible thing here (just the apples), except for some Egyptian onions which have been here since the dawn of time, and never consumed, which he grows because Graham Stuart Thomas said it was like “a shallot on legs” which he thought was funny. He still thinks that’s funny. It isn’t really. Nor is the fact that apples coming flying down off the tree all day long.

This part of the garden reeks of rotting apples, which I admit is a good smell, and you know the poet Schiller kept some in his desk drawer for inspiration, so it’s only a leap from rotten apples to Beethoven’s ninth symphony, and some people claim that they’re good for helping with panic attacks. The guy I live with should bring some into the house, especially before it starts to thunder, but I bet wasps would come in too, and I don’t much care for wasps in the house. And people might wonder why the house is filled with rotten apples. Or, come to think of it, maybe they might not.

I imagine that the back lawn will eventually look like the front lawn–the front lawn in the back yard, I mean–which looks like this after all the rain we got last weekend. You can see the lawnmowers, too. They work for free. The guy I live with claims there is a symbiotic relationship between the little lawnmowers and the native grasses, which all of these are except one that you can’t see, and that they grow better for being chewed. 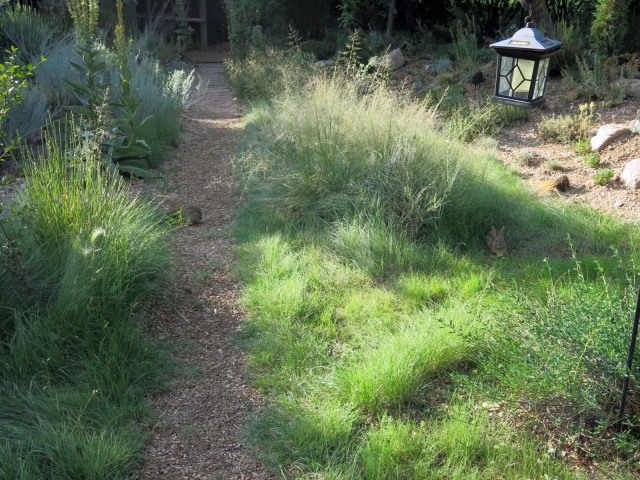 One of them isn’t doing any work right now. I think all this dolce far niente stuff is rubbing off.

It is on me, and so I don’t feel like saying anything else. I’ll leave you, then, with this picture, which is probably symbolic of everything that goes on here. 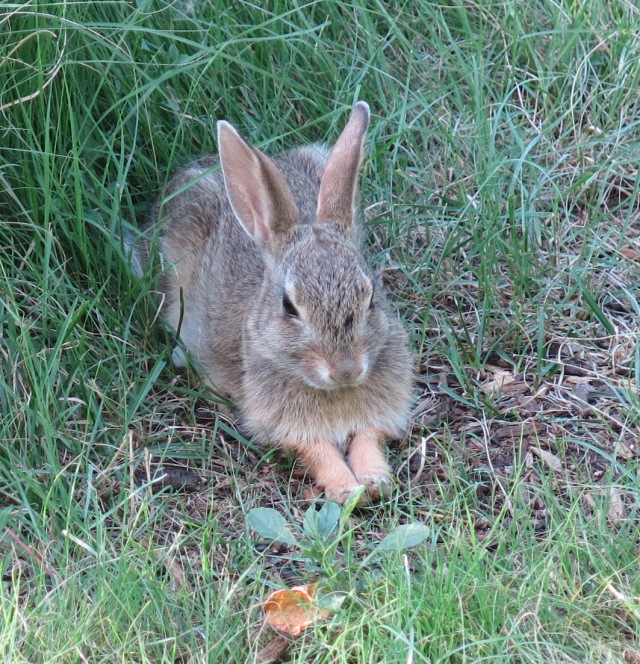