Namaste everyone; it is I, Chess the purebred border collie, once again. You may remember me from such posts as “Disgrace of the Week” and “Last Seen Wearing …”, among other superior contributions to the blogging literature. Here I am in a characteristic pose. Characteristically out of focus, too.

It was a really beautiful day, and the guy I live with was pretty happy all day. So happy you would have thought that Sharon Stone had called and said she’d go out with him, but really, it was just a beautiful day, and he planted things all day long. I haven’t seen him so cheerful since the day before my mommy died. He ordered a pizza in the afternoon, and I got some, but not as much as I thought I should have gotten. I tend to think that pizza is for me, and that he eats it just to spite me. I get most of the bed at night, so I guess it evens out, except for me not getting all the pizza, that is.

The guy I live with spends a lot of time not doing anything, and also, I must say, spends a lot of time not being Edward Weston or Ansel Adams. Find the hummingbird in this picture. It was on the Penstemon barbatus which you can barely see in the foreground, and then it wasn’t. (You can also see the big empty space where he chopped down the huge mugo pine.) Seriously, there’s a hummingbird in this picture. Just not on the penstemon.

What I should say, really, is that if you have nothing better to do than look for a hummingbird in a picture that isn’t a picture of a hummingbird, even though it was supposed to be, then go ahead and look for it.

Then, the guy I live with noticed a cactus in bloom. He is certainly one big noticer of things. It’s been sitting in a pot on the patio all summer, and you would think that he would have noticed the buds, but I guess he didn’t. This is Echinopsis densispina, which he got from the Huntington’s ISI offerings this year.

There was some mention of the path in the back leading to the south side of the garden, and this is what it leads to. A raised bed with Oenothera caespitosa, Yucca pallida, sphaeralceas, and some native grasses, with a tiny nursery behind that. All of the plants in the nursery are dead, which says something, I guess. This is the basic color of the garden as a whole, not just this raised bed, I mean. (What it really is, is a pile of dirt he threw on top of a bunch of branches and stuff he was too lazy to get rid of. Like, when in doubt, cover it with dirt.)

On the left is the “employees only” section, employees being me and Tania, his imaginary gardening assistant, and there’s a path that leads about twenty feet to the south. I’m the only one who goes there, though. It’s kind of scary, but I can see out through the fence.

The path also goes right, and the guy I live with has shown pictures of it before, with the dead grass which he promises to replace with something soft on the paws, like mulch. Lots of plants have been removed in the garden on the left and replaced with native dryland grasses. He’s supposed to pull out the piece of wood in the right hand side of the path and keeps saying he’ll do it, but he doesn’t.

If no one minds how totally brilliantly I can segue into my main topic here (border collies are mostly brilliant, you know), allow me to draw your attention to the poles. A couple of nights ago, the guy I live with and I walked back into the “way back”, which this is, and we were startled by an enormous owl sitting on top of the pole on the right. It was scary. This has happened before, and he did a post or two about it, but I’m doing the posts now, so they’re more interesting, of course, and way scarier.

So this evening, while I was watching TV, the guy I live with heard some weird noises and snuck out into the field with his camera. This is what he found. 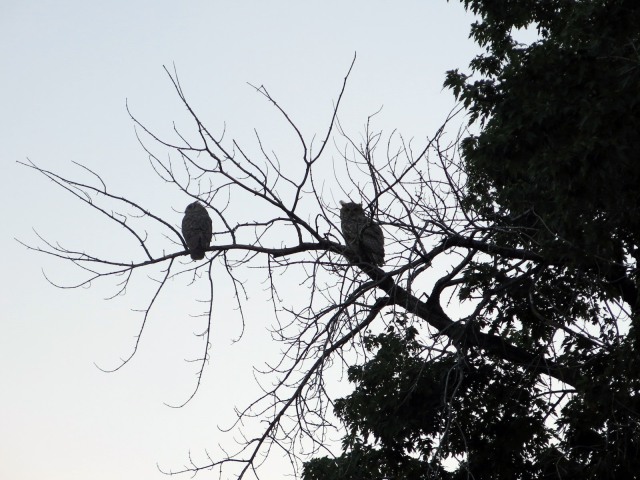 He moved to the south a little.

The one on the right was making the weird noises. You can see its mouth is open. They were probably talking about what to have for dinner. It’s a good thing I’m slightly (slightly) overweight, huh?

They’re really big and scary, and they have these special feather on the leading edge of their wings so they can glide through the air noiselessly. Which they do a lot. Sometimes even over my head.

Well, there you are. Big scary owls, and a beautiful day even though I didn’t get all the pizza, like I should have.

idle
View all posts by paridevita →
This entry was posted in Uncategorized and tagged great horned owl. Bookmark the permalink.

18 Responses to a beautiful day