Hello again everyone; it is I, Chess the purebred border collie, filling in for the guy I live with, who’s been very busy lately. You may remember me from such posts as “Something Completely Different” and “Life With A Nut”, among other delightful posts. Here I am in a characteristic pose.

The guy I live with calls this an “all too characteristic pose”, with my toys strewn all over the place and a biscuit I forgot about. Like I could forget about a biscuit. I’m saving it for later, of course.

Well, I’m not exactly sure why we have to post today, since almost nothing has been going on for days on end. It’s been dark, thundery, and rainless. The guy I live with says people don’t say “it’s been rainless”, but I do.

It hasn’t been completely rainless, as you can see from all the flowers on Tecoma ‘Orange Jubilee’, which got knocked off the plant just last night. 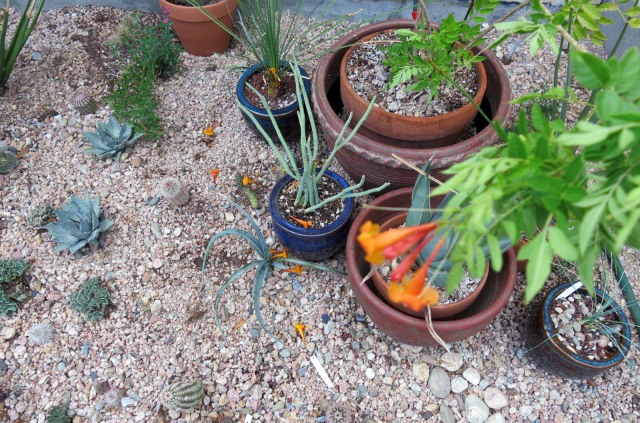 The tecoma isn’t hardy, which the guy I live with says is too bad, just like he says it’s too bad we don’t live in Southern California where they don’t have thunder and can grow these, and tabebuias, too. But, the tecoma can be left outside on freezing nights, like if you forget to bring it in, which he says is a good thing.

A while ago I mentioned that the guy I live with had food poisoning, which is nothing new around here, but he said that one well known folk remedy was to plant fifty lavenders, so that’s what he’s been doing, while I’ve been guarding the house. There’s another reason for all this lavender acquisition, and it has to do with a French gardening book he got recently, over which he swooned when he read it, and decided to post a review of it in the near future. “In French, of course.” I think this is all really dumb, but no one ever asks me. It’s all he’s been talking about.

He weeded today. He had his iPod, and “up root weeder” as it’s called, from Hida Tool in Berkeley, and just went about his business, weeding away. This is the weeder. Maybe he showed this before but this is a better picture. 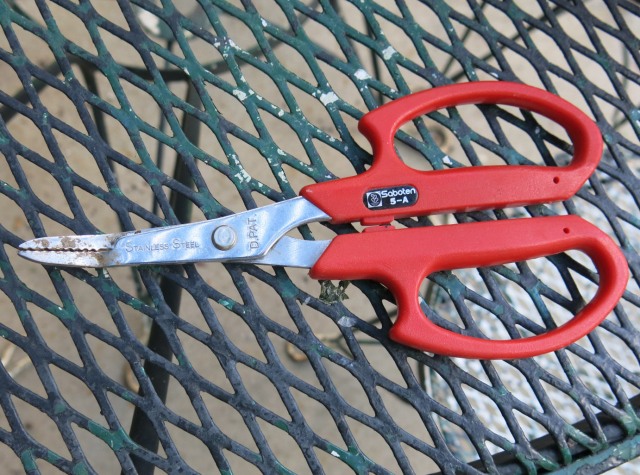 As he was weeding, he came upon something which he thought was very interesting. He even said “This is interesting”. I didn’t think it was, but then, I remember how he used to talk my mommy into coming outside to look at things like this, and she would say “Uh huh” and turn around and go back inside. One or two winters ago, during one of his moments, he decided that the thing to do was to sow some twenty year old seed and stick a label in the ground. This usually results in nothing, but in this case, he found a young Convolvulus phrygius very close to the label.

Of course the Linum tenuifolium on the right is much too close, but in the guy I live with’s defense, he scarcely thought he’d get a Turkish convolvulus from seed just tossed on the ground.

He says this is “four thymes in one place”. He doesn’t know the names of any of them. I’m not sure this is all that interesting, really. That’s Gypsophila fischeri on the left.

Last winter was bad for a lot of plants in the garden but good for thymes. They had a good thyme, you might say. He ordered a whole bunch of thymes after he saw four he couldn’t recognize. I guess he has the idea that if he has more thymes, but with labels, having four he whose names he doesn’t know won’t make him feel so silly. A percentage thing. I’ll let him go in believing that.

And here are the tiniest acorns you probably ever saw, on Quercus undulata. They’re the size of peas. I don’t like peas very much. They roll around when I try to eat them, since I don’t know how to use a spoon.

There’ve been a lot of hummingbirds whizzing around lately, and so I’m supposed to show this picture, too, which is a picture of some pods, and ties into the tecoma picture very elegantly, or so he says. (They’re in the same family.)

The guy I live with grew this trumpet vine for years, and never realized they made pods, until one day he was out in the side yard, where this is, and said, “Look, pods.” That’s how his mind works.

My mommy really wanted the yellow trumpet vine and several got planted but not much of anything happened, as usual. Our neighbor planted the really red one, and so did my mommy, and only our neighbor’s trumpet vine lived. The guy I live with likes trumpet vines almost as much as hummingbirds do, and the sight of these pods reminded him that he never got a yellow one to grow. He says he shouldn’t just have the regular orange-red one.

I think I know what’s going to happen next.

idle
View all posts by paridevita →
This entry was posted in Uncategorized and tagged border collies, Convolvulus phrygius, Quercus undulata. Bookmark the permalink.

2 Responses to another busy day