Posted on September 1, 2013 by paridevita

Greetings and salutations, everyone. Once again it is I, Chess the purebred border collie, filling in for the guy I live with, who’s been moping a lot lately. (He claims he has Seasonal Affective Disorder….in summer.) You may remember me from such posts as “Trials And Tribulations” and “Still More Spring”, among other delightful posts. Here I am looking particularly pensive, and slightly pathetic.

Since we haven’t seen the sun for like three days, the guy I live with started talking about going to DBG to take some pictures. Leaving me here to stare out the window. So we had a “who’s more pathetic?” contest. He said he felt strange going to DBG all by his lonesome, and I responding by looking twice as pathetic. My buddy Slipper really knew how to look pathetic and taught me the tools of the trade. So I won, and he stayed home.

He took some pictures anyway. He was especially pleased that Iris lycotis has tripled in size. He told me that all the gardening books say you’re supposed to protect these from rain. When he planted these, which by the way are growing in almost pure sand, he said “Okay; now you’re protected from rain.” Protect from rain. What a bizarre thing to say. Why not say “protect from elephants”? (I think he said that before, but he says it’s still funny.)

Oh, let’s see. He took some pictures with the DSLR to make sure he still knew how to use it. (In case he ever did go to DBG.) Here’s Agastache ‘Joyful’.

And Quercus grisea with some acorns. 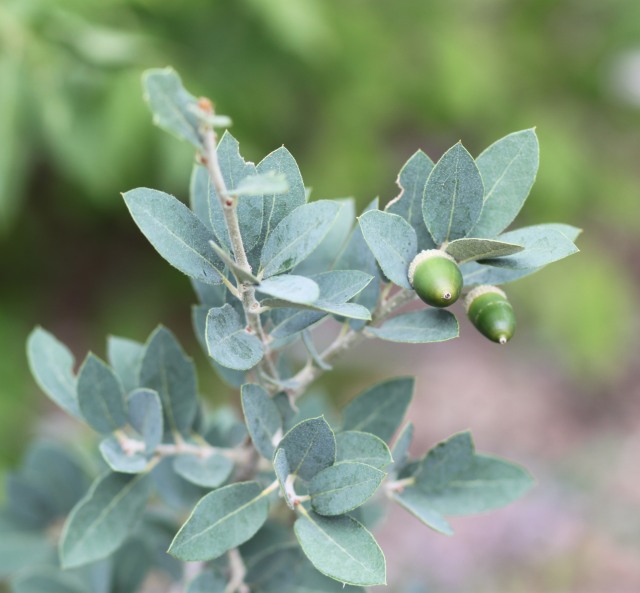 And Mahonia haematocarpa. The guy I live with was intrigued by the fact that Intermountain Flora uses Mahonia instead of Berberis, so he’s going to now, too. It’s distinguished from M. fremontii by the juicy, “edible” berries, and the long central leader which you can see on the right hand side. Intermountain Flora even wonders if these really are two separate species.

Some people came over to the garden the other day and the asked the guy I live with if this or that was edible, and he said “Everything is edible. Once.” I’m not sure his exalted sense of humor was appreciated. Anyway he says the berries taste kind of icky.

And Agave parryi var. neomexicana in front of Ephedra minuta. The guy I live with says that Flora of China says this ephedra does not match the original description, which he claims is interesting. He also says he should have made the North Border into an all-ephedra border instead. I suppose there’s still time to rip out all the plants he planted. Sigh.

These are also sitting on a big pile of sand and I know to stay away from agaves. The guy I live with doesn’t, and has stabbed himself so many times you would think he had learned something, but obviously he hasn’t. Not only am I more pathetic, I’m also smarter. As if you couldn’t tell.

And then there’s Shepherdia rotundifolia. This is pretty easy to grow from seed, but, he says, getting it from the seed pot into the garden and through one winter is the problem. Who knows why, he says. This one is growing very slowly in a kind of sandy clay, but the guy I live with wants more of them. More, more, more. 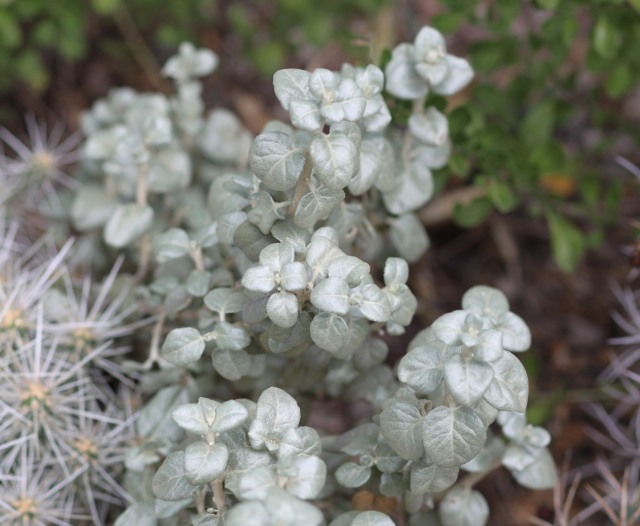 I guess that’s all. He said he might go to DBG tomorrow. I think that’s an idle threat. There’s too much napping that needs to be done here.