Hello everyone; yes, once again it is I, Chess the purebred border collie, here to tell you all about my day. You may remember me from such delightfully heuristic posts like “Weeding Day” and “Three Percent Humidity”, among so many, many others. 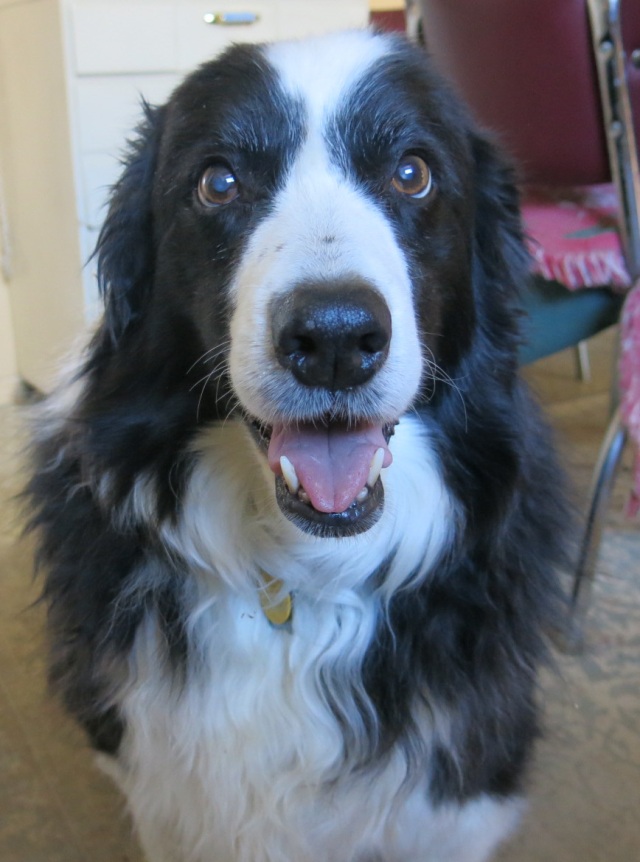 Now, even though I decided to title today’s post “Nothing Gets Done”, something really did get done, namely, the guy I live with took our car in for its checkup. You know, oil change and tire rotation and stuff like that. He used to work on cars by himself but he doesn’t any more.

You should have seen how agitated he was. It was like he was leaving and never coming back. I guess he thought it was going to take hours and hours and I’d miss my dinner and eventually realize I was going to be left alone for the rest of my life, because he was still waiting at the car dealer’s for a part that only one tiny factory made by hand, and it was made of bactiolite, a rare metal, which they were out of, and had to order from a small mine somewhere in central Africa, where there was an uprising or something, because no one had heard from the mine owners in a very long time, even though there was this metallurgist in Finland who was working on synthesizing this very rare metal, but didn’t expect delivery until the year 2075, by which time the guy I live with probably wouldn’t be driving much, so he was afraid he would have to wait.

It took about an hour, and then he was back, and I was glad, as usual.

So I don’t have pictures of what today was like. It was a very nice day and the snow is melting fast. Oh, it snowed, since I haven’t posted for a couple of days.

But, ever resourceful, the guy I live with found some of my mommy’s pictures, and I’ll post some right now. Here’s one of my buddy Slipper, looking down, and my grandpa Flurry, and me. I’m the cute one with the red collar. You can see what good front door guards we were.

What an excellent start for a post. I don’t know what my buddy Slipper was looking at, though.

Now, I’ll show some flower pictures, because I have to, if I show lots of pictures of me. 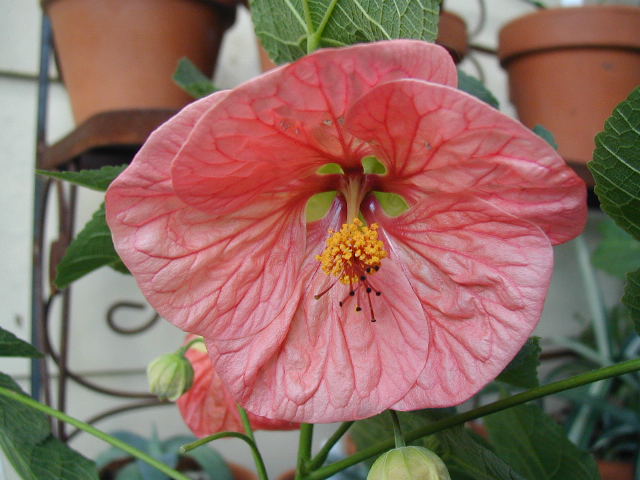 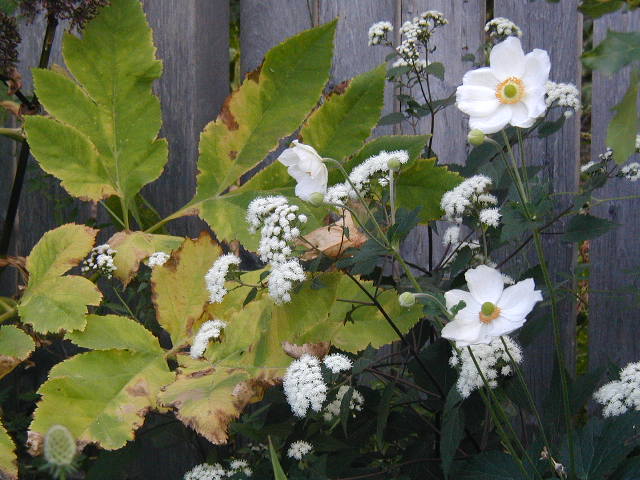 We don’t grow that anemone any more. It gets blister beetles and they devour the whole plant in a day. And besides, it needs way too much water in our garden. But we do have some more anemones, namely, Anemone blanda. They’ve seeded around in the garden here. (You may have noticed I’m going alphabetically, too.) 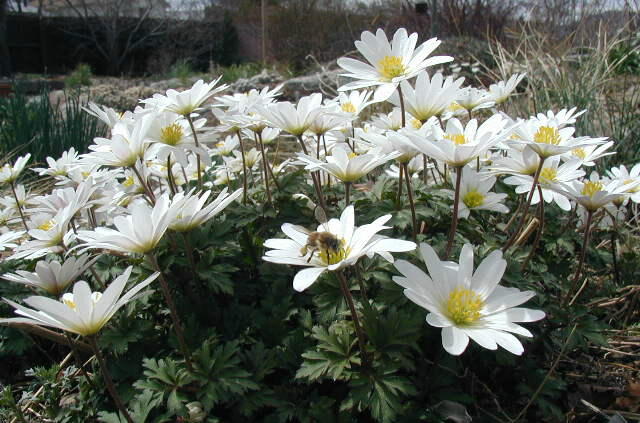 Now a bunch of campanulas. 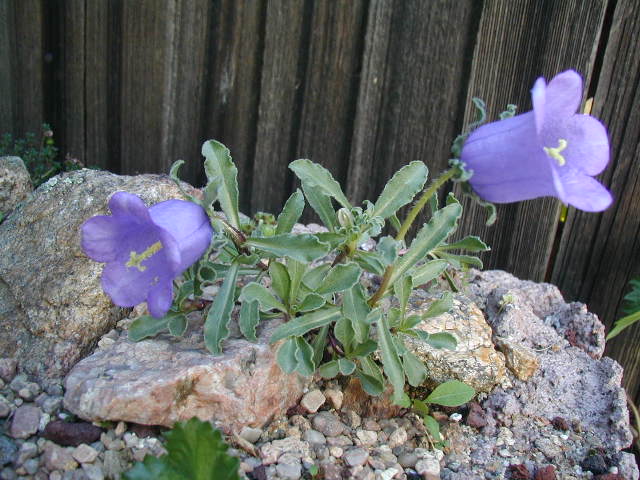 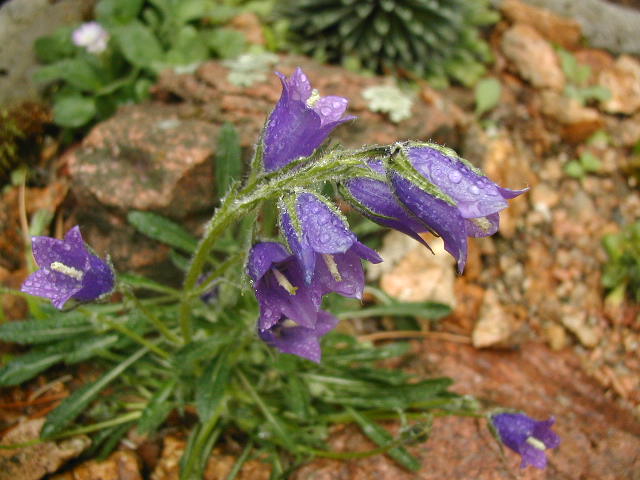 Now our native corydalis. It appears it various places from year to year. I think that’s kind of neat.

Okay, now this is a really weird thing. The guy I live with grew this as a house plant, but it looks like something from a completely different plant. Dorstenia gigas, he thinks. That’s the flower. Really and truly. I think it’s scary. The guy I live with says it reminds him of the scary movies they used to have back in the 1950s when monsters from outer space would come into your neighborhood and smash up stuff and try to grab you. He was sometimes afraid of being grabbed by something that might have looked a little like this.

Here’s the last picture for today, a nice one of Gentiana acaulis. It actually is that color. I know because I can see blue. 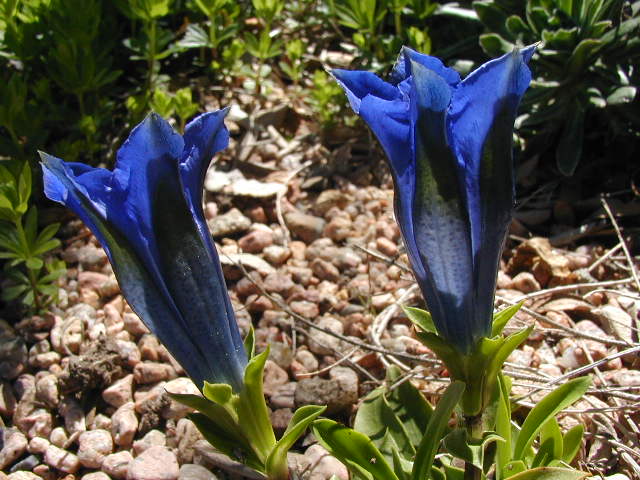 Well, that’s all I have for today. I hope you enjoyed these pictures. My mommy took them with her Olympus camera, which ran on AA batteries. “Almost like it ran on coal”, the guy I live with said.

Wait, no, here’s another picture, of me, no less. That’s right, me, when I was really little. This might have been my first day here, back when there was a green lawn, and my tummy is on it, since I’d never seen a green lawn before, and had to make sure my tail was still attached, or something. I was super cute, as you can see. 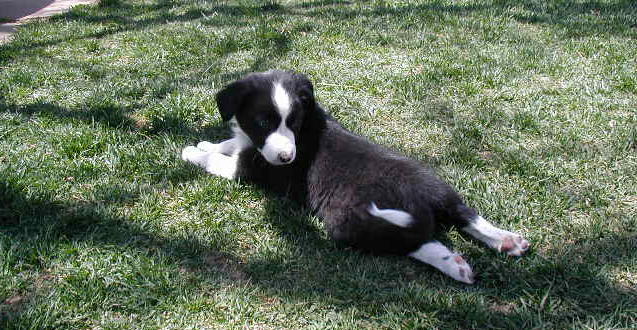 28 Responses to nothing gets done