Hello everyone; it is I, Chess the purebred border collie, here to bring you the latest news from our garden. You may remember me from such memorable and delightful posts as “A Rare Visitor” and “Grace Under Pressure”, among so many, many others.

Here I am in a characteristically hopeful pose. Talk about grace under pressure. I’m gazing longingly at the cabinet where the biscuits are kept. If you didn’t know how to gaze longingly, this is how it’s done.

I got a biscuit, of course. It was a really nice day today, and since it was, the guy I live with raked up stuff and cut stuff down and walked around and looked at things, and he might even have done some thinking, but that part’s hard to tell when it’s happening. Sometimes he just stares at things and pretends to think.

Along with all the sweeping and raking, the guy I live with found a ladybug. 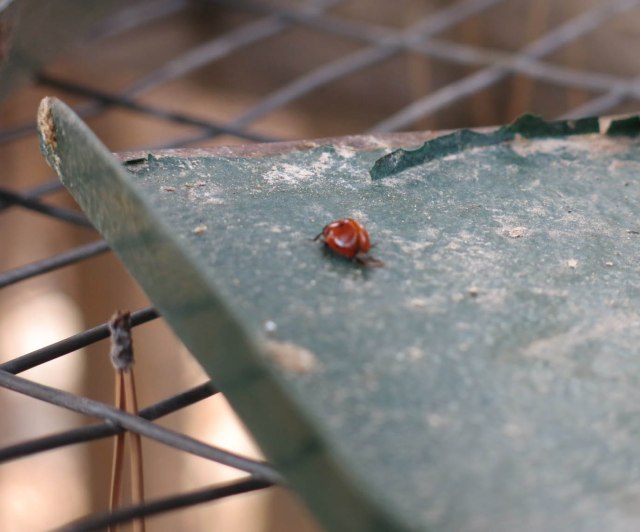 At first he thought it was an expired ladybug, since as you can see the wings were kind of sticking out strangely, but he blew on it and it started to move. He took a tiny stick and poked the wings, to see if they would retract, but nothing happened. The ladybug crawled all over the scoop you see here, then fell or flew down to one of the seed frames. See it, there? 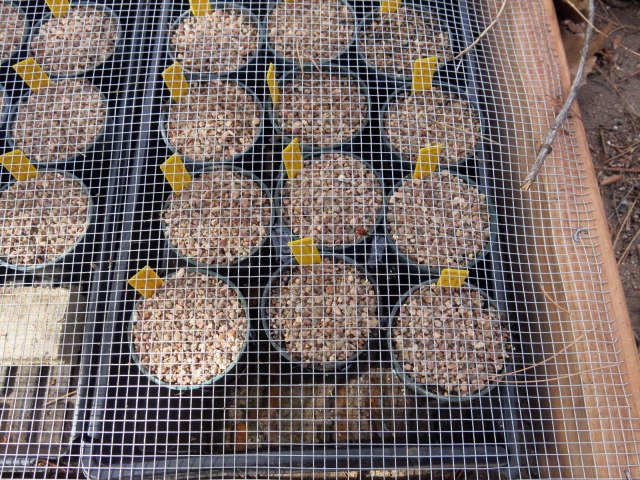 The guy I live with, like any normal person, has always thought ladybugs were cool, and of course they’re very beneficial for the garden. And they bite, too. He said you don’t go to the hospital and get treated for a ladybug bite or anything like that, but the bite is noticeable.

Every time he sees a ladybug he remembers being a kid, and one of the neighbor kids claiming that the ones with bigger spots were called manbugs, which was possibly the beginning of an almost infinite number of dumb things he’s heard over the years. But he always thinks of it.

The guy I live with also remembers a dog named Ladybug, who greeted people at a bookstore he and my mommy went to a lot. Ladybug never got up; her tail just wagged. He said you had to step over the dog to get into the store. That’s how the smartest dogs do their guard work, of course. Someone tries to sneak in, and they fall over the dog.

After all that work, raking, and looking at a ladybug, the guy I live with took some snowdrop pictures and then suggested we take a nap, which we did, and that was excellent.

He also took some pictures of the “third wave” of cactus seedlings, just in case anyone thought it was hard to grow cactus from seed. There must be at least three hundred of these. Maybe four hundred. 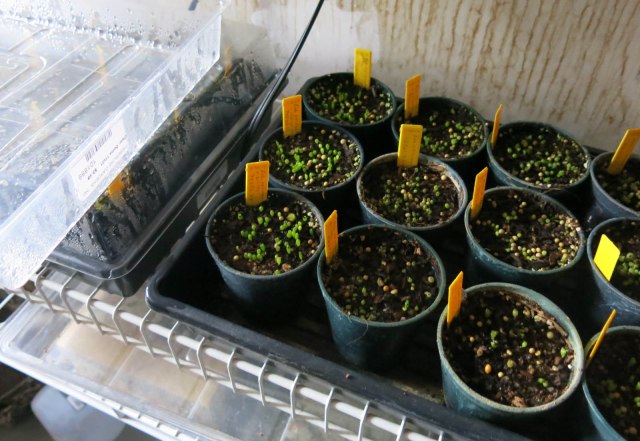 Isn’t this a little ridiculous?

Well, later on, the forecast called for snow, but instead it rained a little, after it got dark. It hardly ever rains here in the winter time. The guy I live with says possibly six times since he and my mommy moved to this house in December, 1985. Three of those times were just last winter. And it doesn’t rain all that much when it does. But it smells really good outside.

“Unlike inside”, said the guy I live with, but whose fault was it that I got two pieces of turkey? Anyway, he has a candle burning.

That’s all for today. Not really very much, but I wanted to show the picture of the ladybug. And me, too.

6 Responses to fly away home