slithering in the bindweed

Hello everyone; yes, once again it is I, Chess the purebred border collie, filling in for the guy I live with, and here to bring you the latest and greatest news from our garden, no matter how scary. You may remember me from such posts as “Slush Fun” and “The Expired Chicken”, among so many, many others.

Here I am in a characteristic after-walk pose. 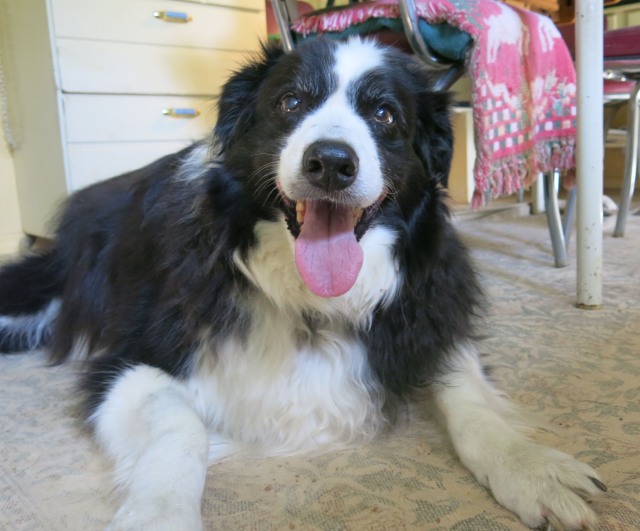 Both walks today were excellent, though the guy I live with says my toenails “could do with a good trimming”. I don’t like the sound of that. If I’d had to have had the surgery, they would have been trimmed then, but I didn’t, and they weren’t.

Here I am on my afternoon walk, heading home. The green is mostly from weeds. 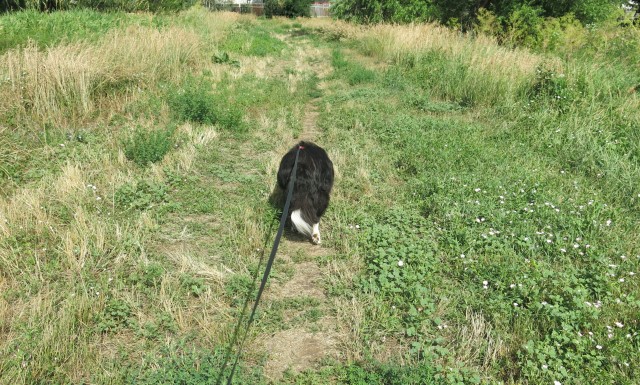 The guy I live with potted up (or, as they say in the UK, “potted on”) some plants for the plant sale to be held by the Rocky Mountain Chapter of the North American Rock Garden Society next month, so he had something to do today.

He also got some bulbs in the mail, and before planting them, took some pictures. He said that with erythroniums it helps to know which side is down, or up, depending on how you look at it. I suppose this is because he planted some upside-down last fall, and had to dig them up and replant them. These are shown right side up, he says. 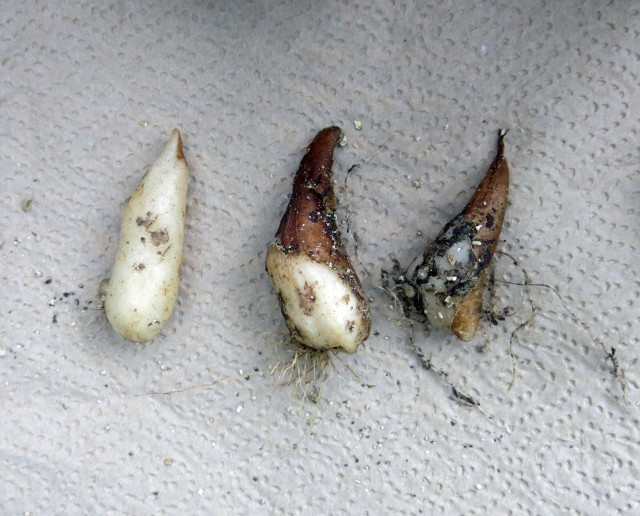 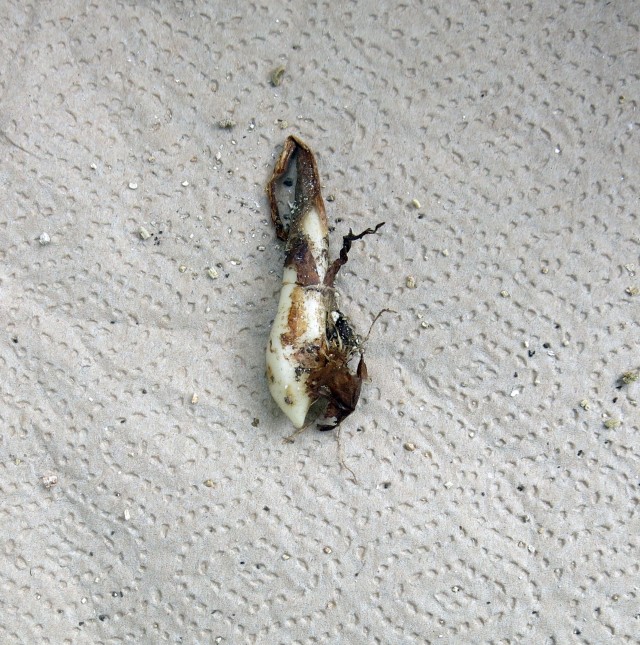 They call these “dog tooth violets”, which is pretty dumb, since they aren’t violets, though I do see a vague resemblance with the tooth business. Anyway, these got planted right side up this time. Whew, huh.

And I have some pictures of plants, too. I think I’ve already showed pictures of some of these, but why not show more, I say. Here’s the colony of Ipomopsis rubra. Not totally in focus, but still a colony. 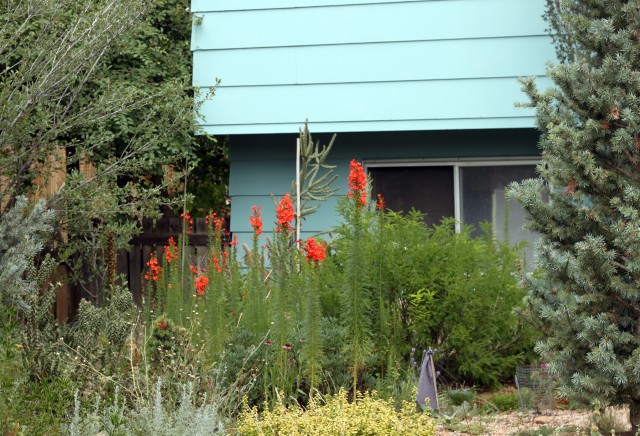 There was a little tiny Calliope hummingbird out in the garden, but it didn’t get its picture taken, because the guy I live with didn’t have his camera at the time, and then when he went to get it, the hummingbird was gone. Typical.

Here’s Sphaeralcea ‘Desert Sunset’ in one of its many color forms. There are oodles of sphaeralceas around the garden, front and back. 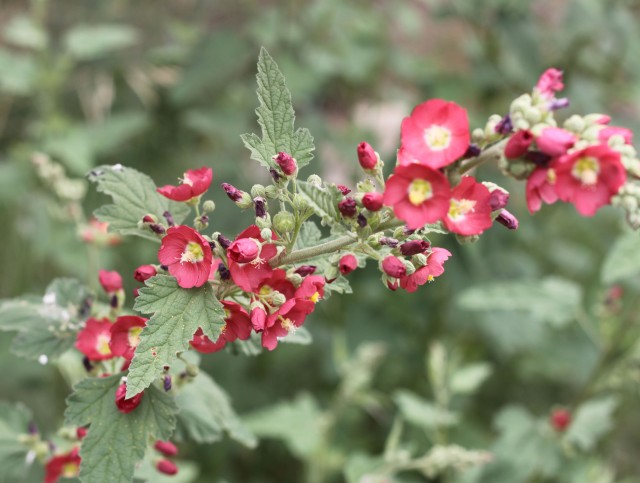 And Penstemon richardsonii. The guy I live with told me he saw this growing out of cliff faces when he and my mommy visited the Columbia River Gorge. 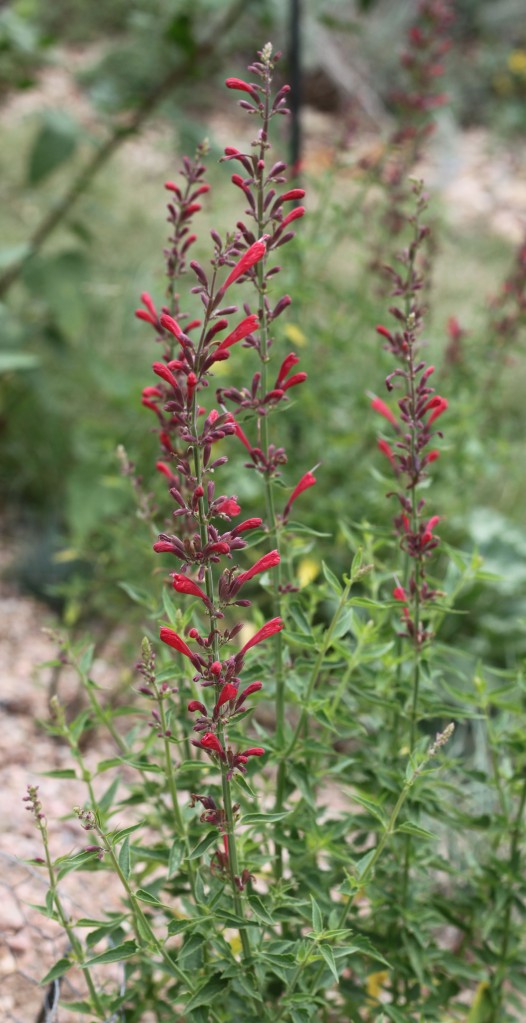 Okay, that’s all of the plant pictures. Now, judging by the title of my post, you might suspect that I have something really scary to talk about, and indeed I do. The guy I live with would point out that I was safe in my fort while all of this happened, but that doesn’t make it any less scary, if you ask me.

If you’ve been following my posts for a while, you may have noticed that we have what some people might think is an overabundance of rodents. Not any more. I don’t really want to say why, but today, while the guy I live with was out trying to take flower pictures, this creature slithered into view. 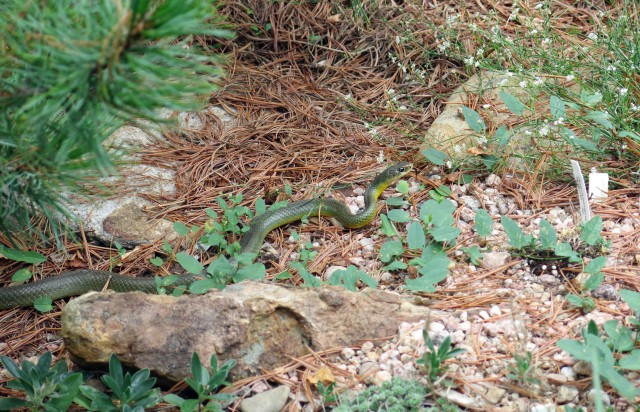 He knew what this was right away. I mean besides it being a snake. It’s a western yellow-bellied racer. Coluber constrictor is its scientific name.

It was not small. 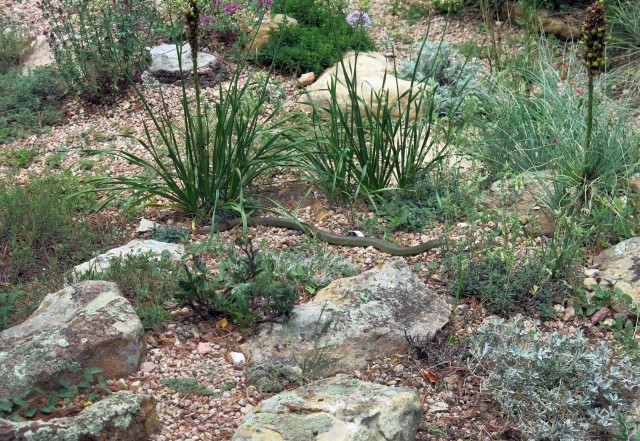 Talk about getting a case of the creeps. I might not be able to go outside ever again. The guy I live with used to tell me stories about a much larger one that lived in the garden when my Grandpa Flurry and my Uncle Pooka were here, and nothing bad ever happened to them. That doesn’t make me feel any better.

I think I’ll stay in my fort as much as possible, and just wait for winter. 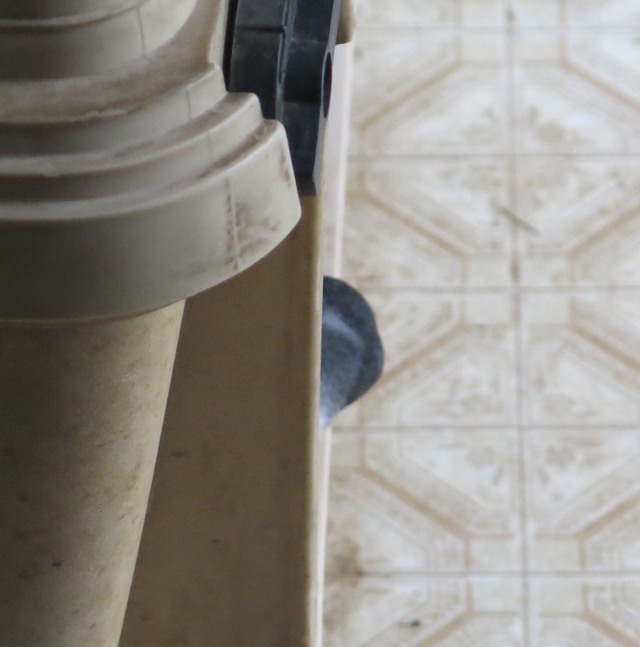 idle
View all posts by paridevita →
This entry was posted in Uncategorized and tagged Ipomopsis rubra, Penstemon richardsonii. Bookmark the permalink.

10 Responses to slithering in the bindweed