life with a nut, part three

Greetings and salutations everyone; yes, once again it is I, Chess the purebred border collie, filling in for the guy I live with, and here today to, well, talk a little about the nut I live with. You may remember me from such similarly-themed posts as “Life With A Nut”, and “Life With A Nut, Part Two”, among so many, many others.

Here I am in a characteristically appropriate pose. 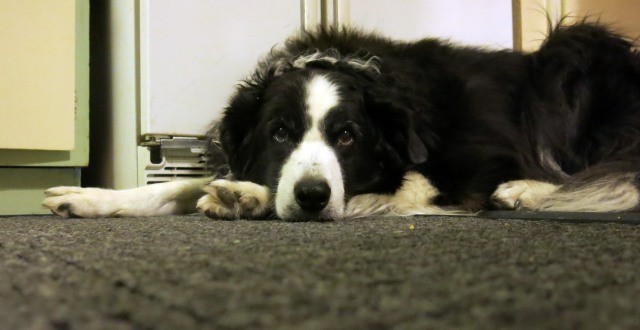 I’m feeling quite good, I must say, and the guy I live with has been taking care of me pretty well (even to the point of putting some butter on my freshly-steamed piece of pie pumpkin so I would eat it), but, you know, he is kind of a nut.

Take today, for instance. He suddenly got the idea that since the sclerocactus seed sitting outside in pots hadn’t germinated in a couple of years, which is typical, he decided to go through the pots and pick out the seed, to save it for later. (The seed will be chipped and germinated under pseudo-laboratory conditions. There’s a YouTube thing showing how to do that, you just look up “germinating sclerocactus seed”, and there it is.) Some of the seeds did germinate this past spring, but he said this was taking too long. Like there are other things to do.

So this was what he looked at. Go ahead, find the seed. The seed is black, shiny, and hard as a rock. It can sometimes take years for the seed coat to abrade sufficiently that water can get in, and start the germination process. Which is why chipping is quicker. 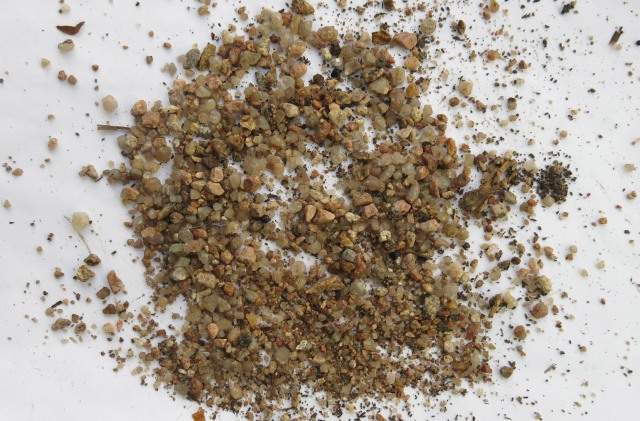 Here’s the seed, right at the end of the tweezers he went out and bought. The little black thing. 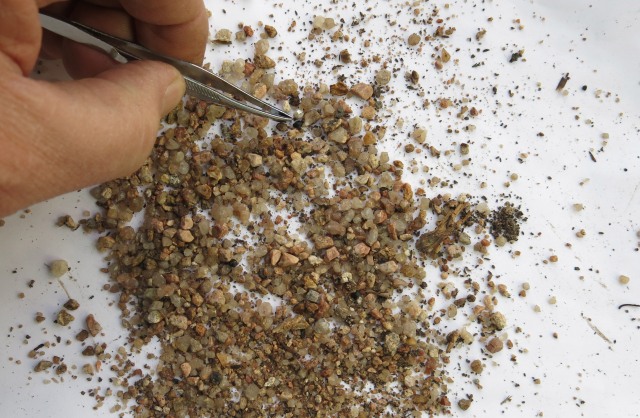 Another one. This is seed of the endangered Sclerocactus mesae-verdae. 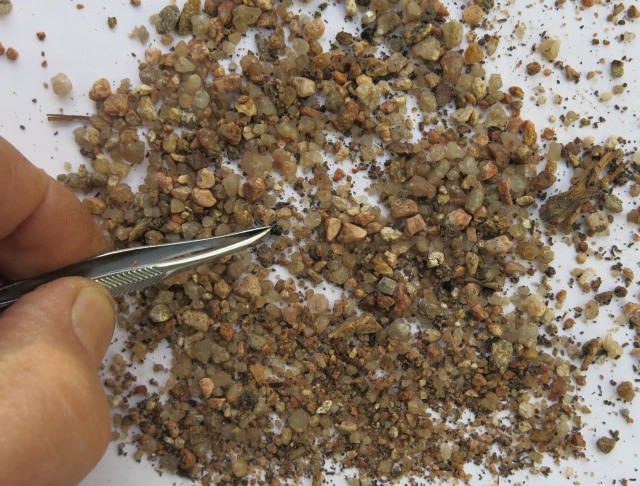 In this picture, seed of Sclerocactus havasupiensis, right smack in the center of the picture. 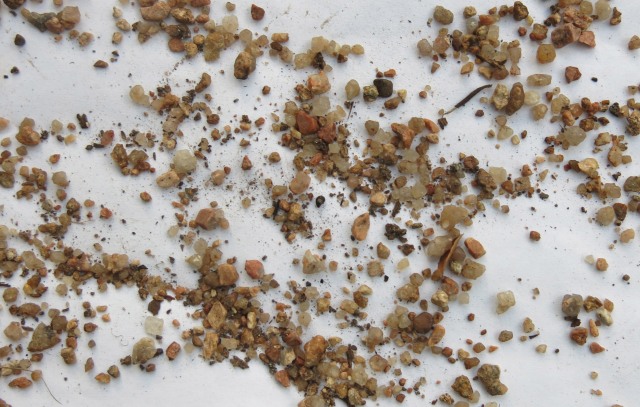 The guy I live with collected more seed than you might think was possible using this method, with several different magnifying lenses, and then afterwards said he was really dizzy, and had to go inside.

He went back out a minute later to take pictures of the moss growing in one of the troughs, because it’s all green and fuzzy now, and he mentioned George Schenk’s book Moss Gardening a while ago. The moss dries to almost nothing during the summer. This one isn’t so in focus, but he said it was hard to focus when you’re so dizzy. (Orostachys spinosa in the picture, too.) 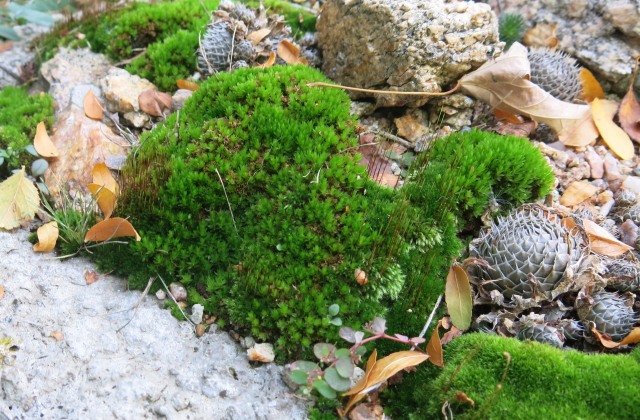 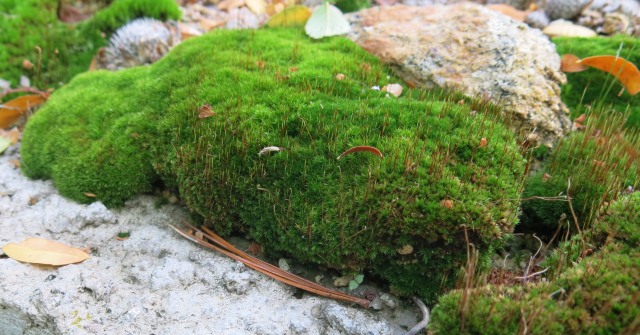 The guy I live with is mighty proud of this moss.

I’ve heard, and maybe told, the story of how the guy I live with tried to encourage moss to grow on the troughs by spreading buttermilk on them, and then a few minutes later heard this “strange, rasping sound”, which was my Uncle Pooka licking off all the buttermilk….. and so he collected a few pieces of moss when he was up in the mountains and planted them in the troughs.

Oh, I need to show one more thing. Two more things, really, with three pictures of them. After the guy I live with came home from the store, he made his typical round of the garden, and got all excited, the way he sometimes does, and came back in for the camera. (Then went back outside with it.)

This was what was in flower. Crocus niveus. The flowers are almost two and a half inches (6cm) across. 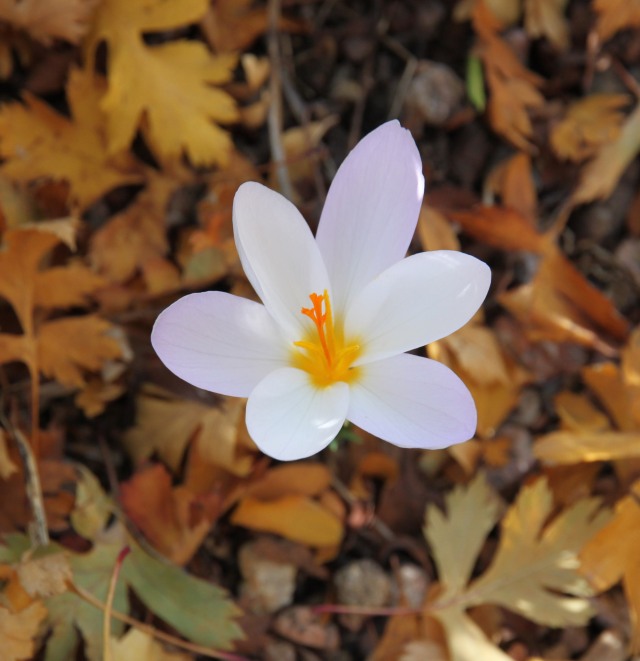 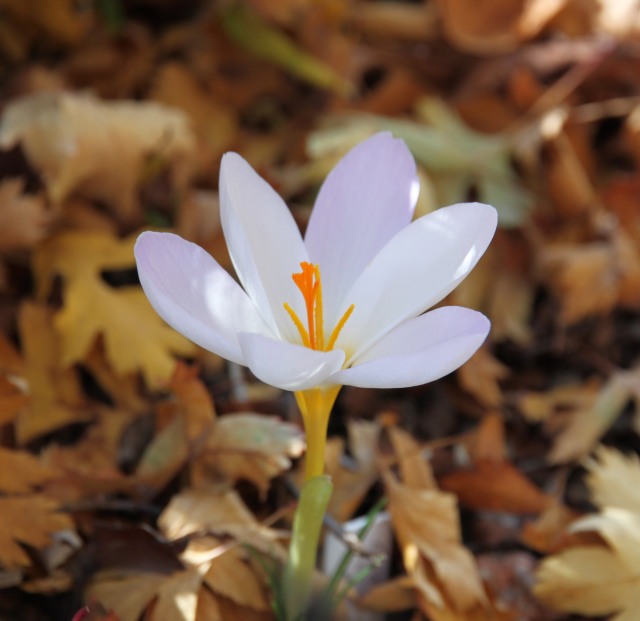 Okay, that really is it for today. The guy I live with says he’s still dizzy, and I’m not sure I feel all that sorry for him, since anyone would know that this could happen. I’ll leave you with a picture of me taken while all the seed-searching was going on.

idle
View all posts by paridevita →
This entry was posted in Uncategorized and tagged Crocus niveus. Bookmark the permalink.

18 Responses to life with a nut, part three