Greetings and salutations everyone; yes, once again it is I, Chess the purebred border collie, filling in for the guy I live with, and here to thrill you and chill you with the latest, most exciting, most riveting, most interesting post it’s possible to make. You may remember me from such exciting and riveting posts as “Little Red Elephants” and “Revenge Of The Rodents”, among so many, many others.

Here I am in a characteristic nose. I mean pose. 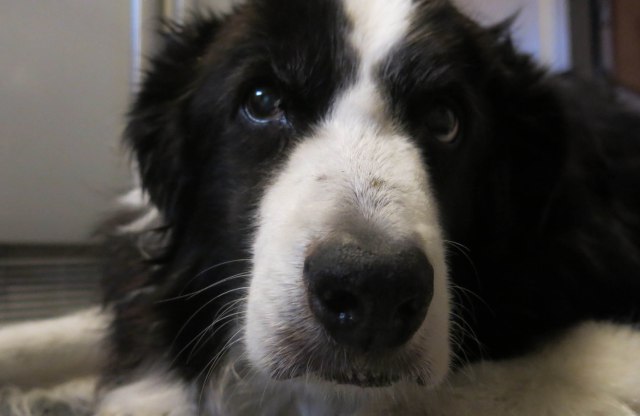 Some cutting down of things went on yesterday, and the day before, too. He says he gets dizzy sometimes, leaning over and cutting back plants, and could use an assistant, but he has to stick with his imaginary one. You know, Tania, the one who never shows up.

This is what the “new view” looks like with almost everything cut back. About the same as before, really. 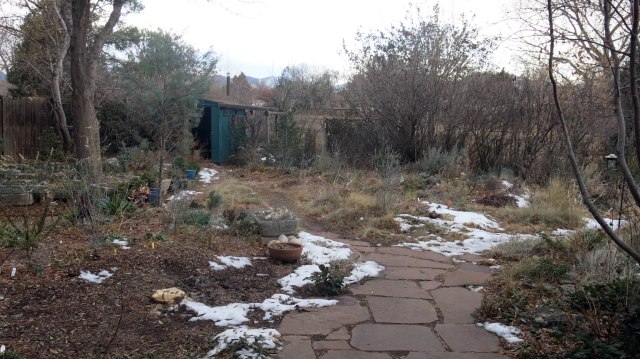 A new rock garden is going where the pinyon stump is. Some time in the future, I understand. And all the plants that were planted to take up space are going to be moved, to make room for “cooler plants”, which I guess makes sense.

And so, to celebrate the new view, or something, we had some very exotic birds land in the garden, and they started to eat stuff off the ground. I’m not allowed to do that, though I still do, sometimes. My grandpa Flurry was a big one for eating bird seed, which the guy I live with said was a very low thing for a purebred, herding certified border collie to do, but he did it anyway. 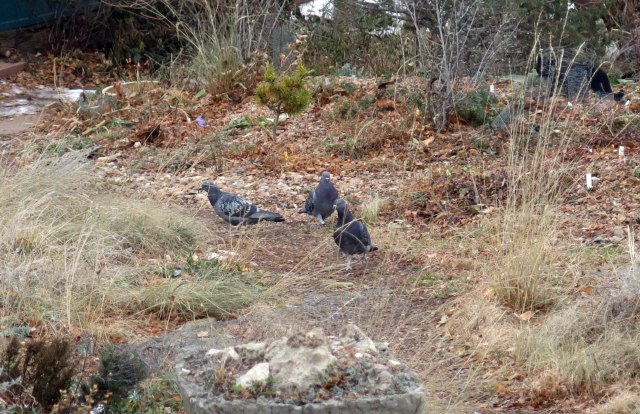 In other news, the guy I live with made his seed-sowing mix yesterday. It’s just peat moss, perlite, and sand, with some Turface (calcined clay) thrown in, too. At first he said he was going to screen the peat moss, which he does for making troughs, but he decided not to. The mix goes into a (clean) trash can and sits out on the patio, making it look like stuff is done around here. This is for seed sown in pots and left outdoors, which isn’t much of anything resembling work, if you ask me. Exactly how much work is it to leave something outdoors? 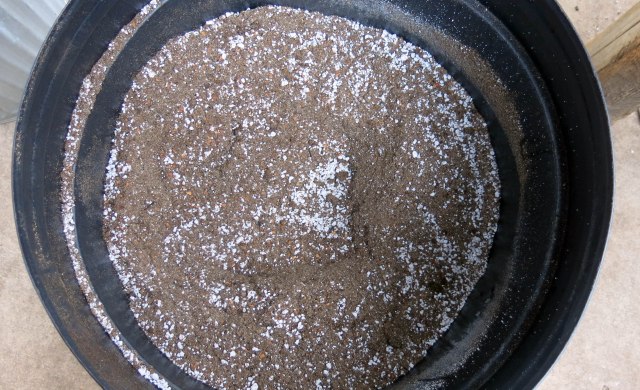 Other things do resemble work, and come with instructions, which the guy I live with paid no attention to (typical) and wondered “why the stupid iris seeds didn’t germinate”, but after he read the instructions, and decided they “weren’t technical enough”, which is why he couldn’t understand them, he did some studying (for once), and figured out what the instructions were trying to tell him. Slicing into the seed embryo with a razor blade and things like that.

So, in a way, this isn’t “what happens when you follow the instructions” so much as it is “what happens when you figure stuff out for yourself”. Whatever. You should have heard all the hoopla when four seeds of Iris lycotis germinated yesterday. The seed was collected in northwestern Iran about fifteen years ago; a climate similar to the one here. They were placed on damp filter paper, which he happened to have some of. (Well, it started out dry, but I think you know what I mean.) 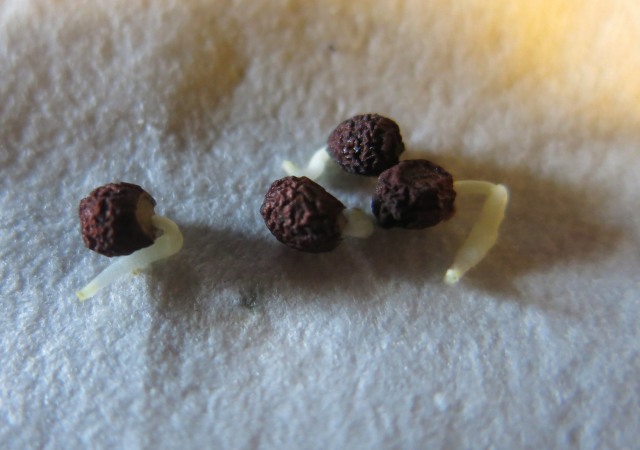 You might think, “Iris, huh”, but it’s not that way at all. Here’s a publicity photo of Iris lycotis from our garden, just to remind you. It is a big deal. 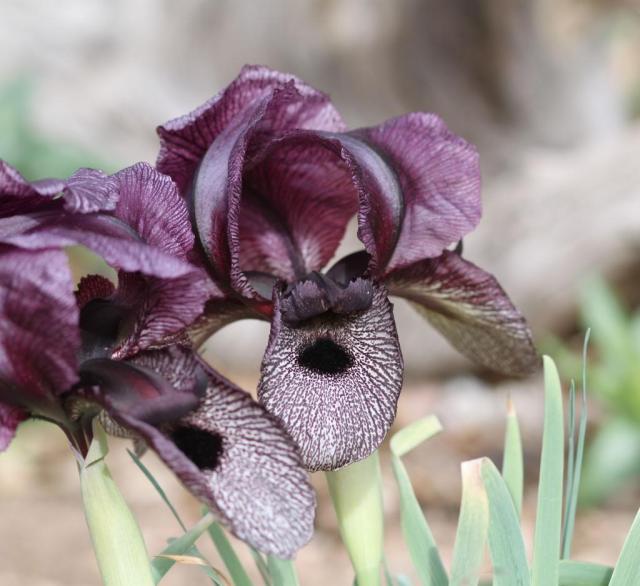 Let’s see now. Oh, I have a picture of the way the sky looked today, before it snowed those 119 flakes. 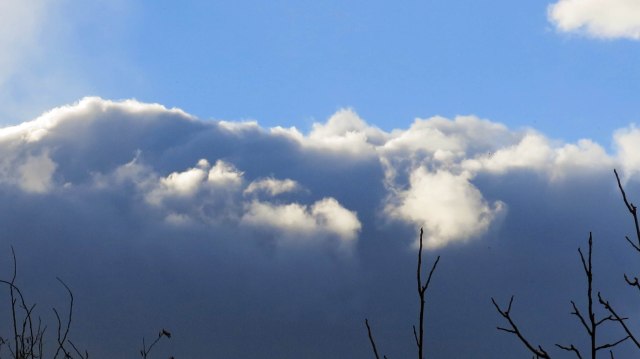 And a picture of me doing one of the things I do best. If it looks like that 4×4 on the left is leaning a bit, that’s because it is. The camera lens does distort a little here, but the post is still leaning. It was pushed a little to the north when we had huge piles of snow on top of the patio cover, winter of 2006-07. The guy I live with braced it, some. That was the winter that the patio slab on the right cracked in four places, because there weren’t any expansion joints included.

The heated birdbath is very important to the birds. The birdbath hasn’t frozen much in the last couple of nights, though. 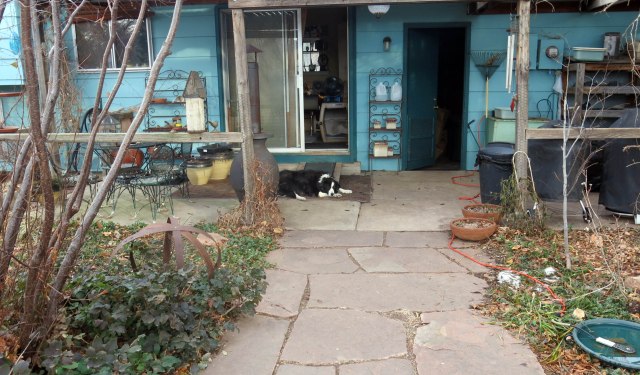 Now that really is all. You know I’m going to have to hear about iris seeds for a long time to come, but I guess it gives the guy I live with something to do.

idle
View all posts by paridevita →
This entry was posted in Uncategorized and tagged Iris lycotis. Bookmark the permalink.