Greetings and salutations, everyone; yes, once again it is I, Chess the purebred border collie, filling in for the guy I live with, and here today to show you how to make a post even though nothing has happened. You may remember me from such similarly-themed posts as “A Post About Nothing” and “Another Post About Nothing”, among so many, many others.

Here I am in a characteristic pose. Remember how I showed how to look ultra pathetic and sad, in case you needed to be (like if you wanted a biscuit and no one was paying any attention)? Well, I’m showing how to do it again.

Not much else has happened in the last few days, except for the checking of the iris seeds, which is pretty boring, if you ask me.

This came in the mail. Like he doesn’t have enough of these. He got it at Garden Talk; they cost $39, if you wanted to know.

We had frost the other morning. We hardly ever have frost here, because there has to be moisture in the air, which there hardly ever is. This is Mahonia repens. It’s seeded all over the garden, as well as crept here and there, which is why they call it repens. This one turns purplish when it gets cold, like some people do.

They say at this time of year there are more geese (Canada geese, Branta canadensis) than people along the Front Range here, and sometimes the sky is full of honking.

There would have been better geese pictures if someone had been out there waiting, but this is what you get instead.

And some pictures of the garden to show what it looks like at this time of year. It’s been nice enough for me to lie out on the patio rug. The rug is there for me, you know. If you look closely at this picture, you can see the gap in the fence, where it started to lean (because the posts are hardly in the ground at all), and just to the right of that is a shiny spot, that’s the sun hitting Miscanthus sinensis ‘Silberfeder’, that the guy I live with gave to his neighbor. She passed away a few years ago; it was a really pretty garden. 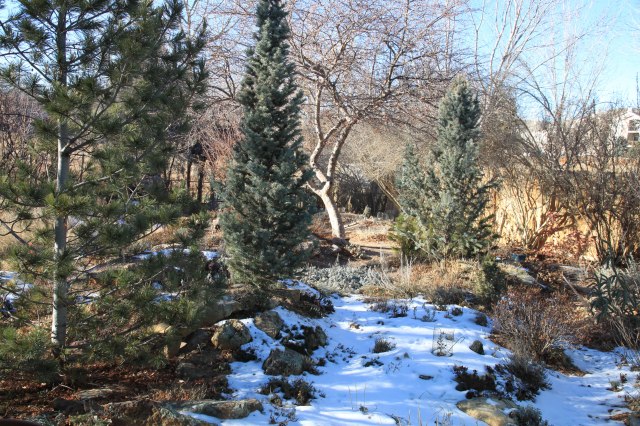 The guy I live with says we should call our place “Garden of the Forking Paths”, like after the story by Borges, but people might think that was weird.

These paths were made by border collies, my grandpa Flurry and my Uncle Pooka, so they could race out to the “way back” and bark at things that needed barking at. There are agaves under the plastic there; they were planted out when they were too small.

Speaking of the “way back”, here’s part of it. One of the poles, for the owls, is kind of leaning. Mount Lindo in the distance, 7800 feet high.

Looking back toward the manor house, from the shed, more or less. 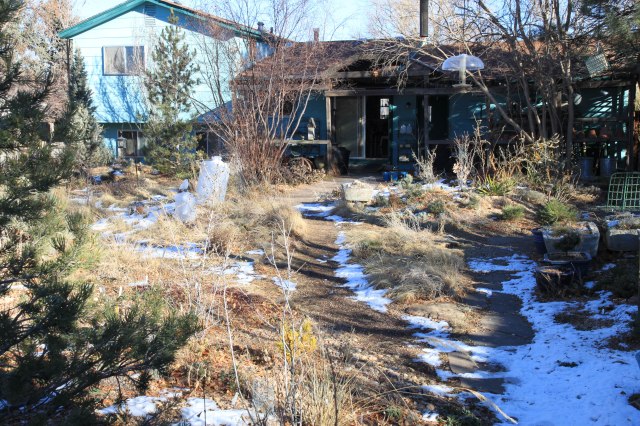 Well, that’s it. See, hardly anything, and I can still make a post, and end with a picture of me gazing skyward.

idle
View all posts by paridevita →
This entry was posted in Uncategorized and tagged Garden Talk, Mahonia repens. Bookmark the permalink.

12 Responses to when nothing happens