Greetings and salutations, everyone; yes, once again it is I, Chess the excellent purebred border collie, filling in for the guy I live with, and here to bring you the latest news about me and our garden. You may remember me from such white posts as “White Fever” and “Mostly White”, among so many, many others.

It was 70 degrees Fahrenheit here today (that’s 21 C). Pretty delightful, though it’s supposed to get colder by the end of the week. (That’s where the “things change” that the guy I live with says all the time comes in handy. Things change.)

I thought this was going to be the week where all these scary things got done to me, but instead things have taken a different turn, and I’m supposed to start a new medicine.

The guy I live with went to the Chinese herbalist place here, and got some for me. The guy at the herbalist said this has proven very effective for dogs, which, as you know, I’m.

He said that, according to Wikipedia, baiyao means “white medicine” in Chinese, and so that ties into the gardening part of my post in what I’m sure you’ll agree is a most elegant way.

We think that’s the one called ‘Theresa Stone’, but can’t really be sure because the label disappeared when the fence behind the snowdrops was built. (It got stepped on.)

The guy I live with took a bunch of pictures, but it was pretty damp over there and he didn’t kneel down to take the pictures, and so most of them turned out not to be in focus. This one is, at least part of it. 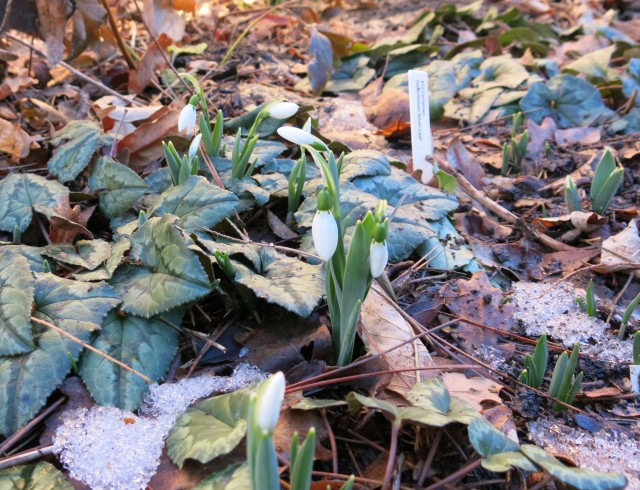 Well, that’s really all I have. Both of us have our white medicine. The guy I live with says to imagine drifts and drifts of snowdrops instead of just the couple I showed, and I have a whole bunch of things to do, so I better let you go and start doing them right away.

14 Responses to the white medicine