Greetings and salutations, everyone; yes, once again it is I, Mani the fairly tiny purebred border collie, filling in for the guy I live with, and here to bring you the latest news from our very wet garden. You may remember me from such posts as “Cabin Fever”, among at least a few others.

Here I am in a rather uncharacteristically damp pose.

See, what happened was, the guy I live with needed to water something that was transplanted out into the raised bed in the “way back”, and so he dragged the hose back there and watered, and then as he went back to turn off the hose, I discovered I could play with the hose. It was a lot of fun.

That was a couple of days ago. Then it started to rain. It rained and rained, and then it rained some more. I went out in it, as you can see. The guy I live with said I looked like a completely different breed of dog. I wasn’t, of course.

It turns out that I really enjoy getting all soaking. The best thing to do after that is lie in some dirt, which there’s a lot of around here, and then track stuff onto the carpet, because I can be almost certain that it was shampooed the day before. The guy I live with does that constantly, like it’s his mission in life or something, and so when I track stuff onto the carpet, he doesn’t get as angry as you would think, because he’ll be shampooing the carpet again before you know it. The shampooing thing makes a lot of annoying noise.

The rain finally did stop, and so here are some pictures of what some of the garden looks like after it’s rained. 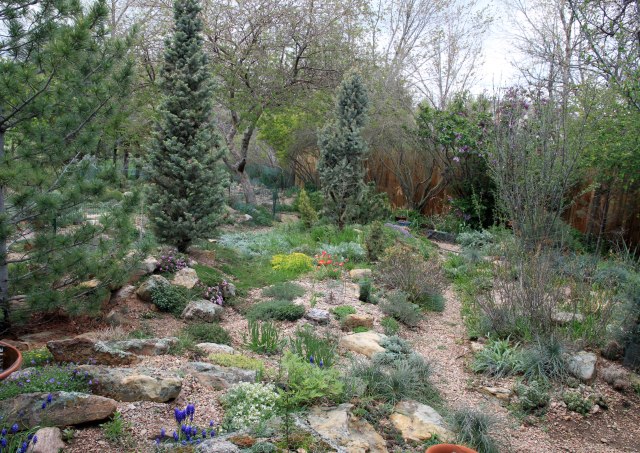 Here’s how it would look if you went through the garden gate, and if I didn’t chomp you in my duty as dreaded and fierce guard dog (in which case you would run in terror). The lilacs ‘Asessippi’ and ‘Pocahontas’ are flowering on the right side of the path. The white dot past the arbor is my stuffed hippo, Nippo. Nippo was here when I got here. Well, Nippo was in the toy basket, not out in the yard. That’s what I mean. 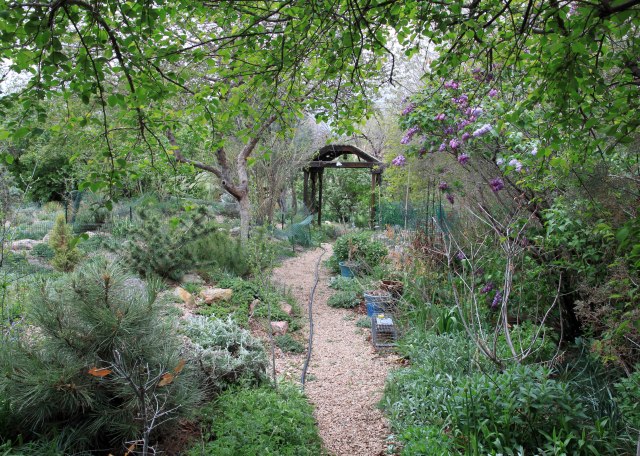 Part of the “way back”, with the leany fence showing partial repairs. There are two Wasatch maples, Acer grandidentatum and a “dwarf” apple tree. The top of the bird bath (the green thing) broke into several pieces over the winter, so the guy I live with says the column, or pedestal, or plinth, will just sit there, “looking all Grecian and stuff”.

He says, with a sigh, that the lawn needs some work.

Some tulips. The guy I live with says these are ‘Prinses Irene’, which is a sport of ‘Couleur Cardinal’, and those are his two favorite tulips.

Well, that’s it for today’s post. It rained, and I got soaking wet. Not much else has happened besides that. Back to my cozy chair, I guess, after being dried off with a towel. 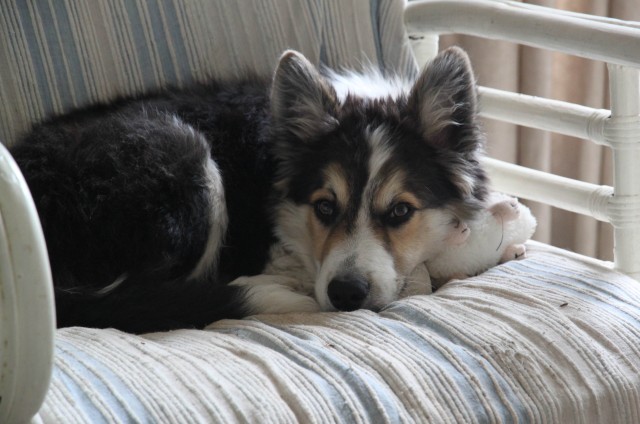 17 Responses to damp and delighted