Greetings and salutations, everyone; yes, once again it is I, Mani the not-standardly huge purebred border collie, filling in for the guy I live with, and here to bring you some very interesting, if a bit recondite, news. You may remember me from such interesting posts as “The Upended Breakfast”, among so many, many others.

Here I am in a characteristically horticultural pose. The guy I live with says I should add “goofy”.

That picture, the one above I mean, was taken in the “way back”, where it’s super dry, even with the bit of watering that’s been done. This was taken just as the sun was going down.

Here’s another one. This is me inspecting some native grasses. The Employees Only section is behind me, and to the left.

The guy I live painted today. It was his seventh wedding anniversary without the lady of the house to celebrate it, and so he moped a little, and decided to paint the wooden stakes that maybe you’ve seen pictures of.

See how you really notice the unpainted one? He said that anyway. True, you see the green ones, but in the sun, which this isn’t, really, you notice the unpainted ones. When he was a kid, his grandfather had him paint stuff, like sticks, and always green. Even though Henry Mitchell said that black was the best color, the guy I live with paints things green now. When he gets around to it.

Oh, that’s the cowpen daisy, Verbesina encelioides, on the right. It was really tall, and then fell over.

Here I am standing at the end, or maybe the beginning, of “Pooka’s Shortcut”. Pooka was a purebred border collie, also with radar ears, who live here quite a while ago, and instead of going all the way around the raised bed on the right, he decided a shortcut was in order, and so now there is one. This part of the garden is super dry too. 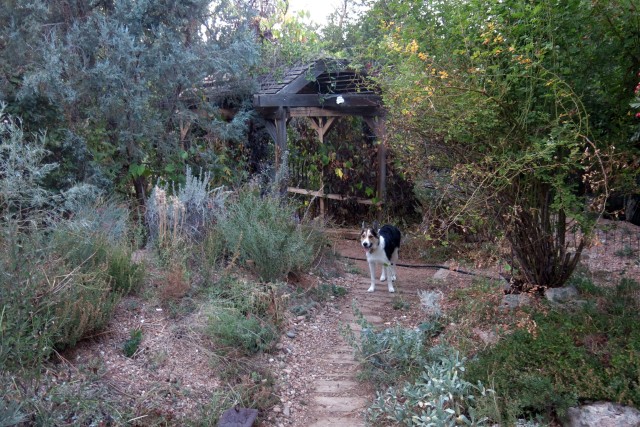 On my walk this evening, I saw these. They were pretty scary. The guy I live with said they were glider type things with propellers on the back. It made me wish I had a propeller. But they were still scary.

I did quite a bit of this today, while the guy I live with was painting.

Okay, you’re probably wondering about the recondite stuff. I bet you thought I’d forgotten about it. I must tell you that this is pretty arcane indeed.

Some came in the mail today, and they didn’t get planted in the ground. That’s them in the pots there.

Well, what he said was that these snowdrops could start flowering in the next couple of months, but that they need roots first. You can see how dry it’s been here, so if the bulbs are planted now, they’d need to be watered a lot in order to grow roots before flowering, and in much heavier soil which would need a zillion times more water to penetrate to root depth, and so instead, they’re being grown in the pots, and watered a lot, so that the bulbs can grow roots, and can then be planted, roots and all, into the ground. It shouldn’t take them too long to make roots.

These little snowdrops go by the name of Galanthus elwesii var. monostictus Hiemalis Group. (Hiemalis is Latin for winter.) The last purebred border collie who lived here before me, Chess by name, posted a picture of one last November, in the post “Freezing Again”.

Two of the pots hold bulbs called Galanthus elwesii var. monostictus Hiemalis Group ex Highdown.  Of course there isn’t enough room on the labels to write all this. The “Highdown” refers to the garden of the late Sir Frederick Stern, which you would know if you’d read Three Gardens by Graham Stuart Thomas, which you ought to, according to the guy I live with.

He says that then you also might want to have a boiled egg and toast with marmalade in the garden, and wonder what “the excellent packeted parsley sauce” is, which I certainly do. I’m not so sure about marmalade though. The book is still quite delightful, he says.

So that’s it. Lots of pictures of me, and some recondite gardening stuff. I have one more picture of me to show you, heading out into the garden about an hour before sunset. You can see how green things look when the sun is right.

idle
View all posts by paridevita →
This entry was posted in Uncategorized and tagged Galanthus elwesii. Bookmark the permalink.