Posted on November 6, 2015 by paridevita

Greetings and salutations, everyone; yes, once again it is I, Mani the slightly miniature but not totally small purebred border collie, filling in for the guy I live with, and here to bring you completely up-to-date with the news from our garden. You may remember me from such up-to-date posts as “The Hair Cut”, among so many, many others. 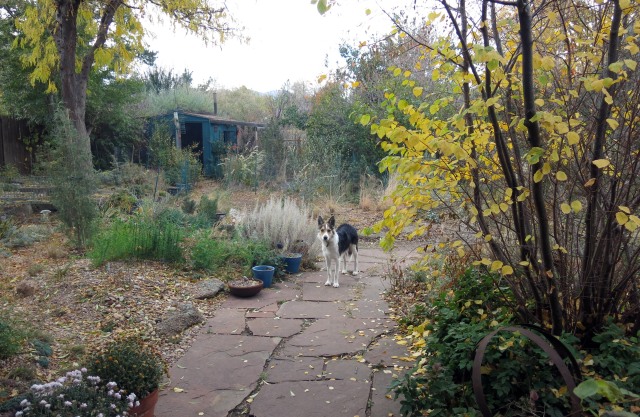 You can see on the right, there, that the birch has lost almost all its leaves.

lost almost all its leaves

You can also see that there are some branches which need to be sawed, at least more than they are now, and I understand that this will happen eventually. The birch, by the way, is the native one, Betula fontinalis, and it’s been here for a very long time. It’s a shrub rather than a tree, which I think you can see, too.

The larger trunks don’t live very long and then woodpeckers hop up and down them, and then (again eventually) the dead branches get sawed. The guy I live with says the birch probably wants way more water than it gets here, because normally its lives next to streams and creeks. He says that there are some growing along Bear Creek, which is north of here.

I’ve been pretty busy. I decided that I prefer my stuffed animals unstuffed, and so I’ve been working at that for a while now. I think I’m almost done. 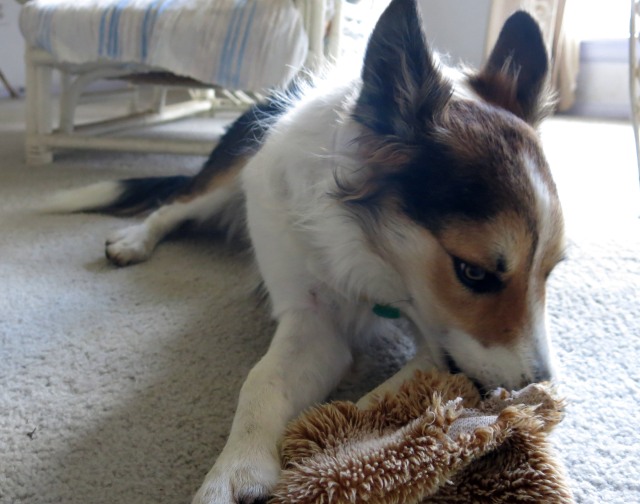 I could tell that the guy I live with didn’t care much for the toys being unstuffed, because of the invective he employed when he found stuffing all over the garden. It was pretty startling to hear, and as you can tell I have pretty good ears for hearing.

Well, then it got worse, when the guy I live with tried to put screen into the bottom of these things.

Maybe you can’t see that there are vertical ribs in the pots, which allows them to be stacked, one on top of the other, but there are, and when the guy I live with tried to put a cut square of screen into the bottom, there was a considerable amount of invective. Horticultural invective, he said, as though that made it better.

You may wonder why he had to get these pots, which are called tree bands, if you wanted to know. It’s all because of something called a perched water table, which is caused by a difference in gravitational potential between the top of the pot and the bottom. All perched water tables are the same height, too, so no matter what the size of the pot, the height of the water table is the same. And that means that a much smaller pot will have less soil-less mix that isn’t saturated with water than these taller ones.

He blames losing some of the iris seedlings this year on a perched water table.

Well, he got the screens in place, after a considerable amount of invective, and here you can see new seedling irises growing in the pots.

So that was that.

Oh, and then there was this. It didn’t happen on Halloween, which was too bad, but it still happened.

I had to go out very late one night, before midnight, and I started barking really loudly out at the back fence. The guy I live with went out with a flashlight, saw what I was yelling about, and made me go inside really quickly. He said that just because what I saw was all black-and-white just like me, it didn’t mean that it was a purebred border collie like me.

So then he went back outside to take a picture, just for our blog. If you look closely you can see a single glowing eye. The lights from the apartment complex to the north of us didn’t help much. (The creature had two eyes, but only one was visible. I mean, just to clear that up.) 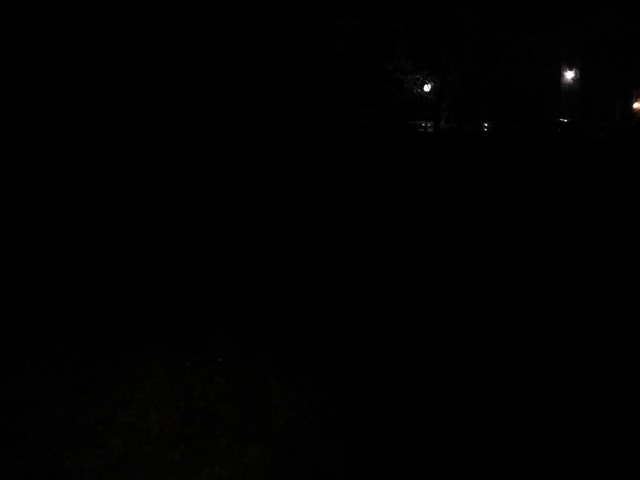 Can’t see it? How about now?

So then, the guy I live with heard all this loud rustling under the cottonwood out in back, wondered how large the creature was making all that noise, and ran inside yelling “Blair Witch! Blair Witch!” and then we went to bed.

Pretty funny, huh. And scary, too. The guy I live with says that when I see these black-and-white creatures I’m supposed to walk the other way. I don’t see why, but he says I don’t want to find out why. He also said that very small creatures can make a lot of noise when they walk through dry leaves, but for some reason he didn’t think of that at the time.

Well, that’s what’s been going on here. I guess exciting, except for the screen business. I’ll leave you with another picture of me, not worrying about black-and-white creatures rustling in the leaves before midnight. 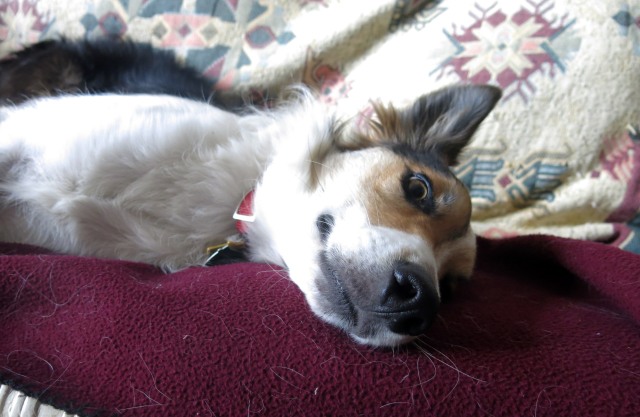