Greetings and salutations, everyone; yes, once again it is I, Mani the I guess completely normal-sized and soaking-wet purebred border collie, filling in for the guy I live with, and here to bring you some very damp news about me and our garden. You may remember me from such equally damp posts as “Another Rain Movie”, among at least a few others.

Here I am in a characteristically weather-related pose. There isn’t much to do today, though I’ll have some helpful tips a bit later on, to show you what else to do, beside mope, that is.

It’s raining. It was just misting, then drizzling, but now it’s raining, the way it does in spring here, so I’m told. It could also, you know, snow, but I’m not allowed to talk about that.

This is me a little later, though, wondering what the guy I live with was doing outside in the mist, drizzle, and rain.

The guy I live with is all put out about the front yard, which he says looks “totally awful”, after all the shrubs and trees were smashed by the snow, and then all the weeds came up. This is what it looks like from the definitely-not-clean upstairs bedroom window. 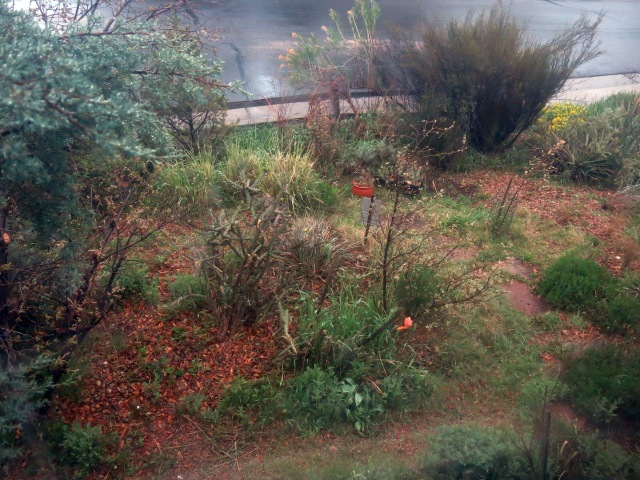 You can see the branches of the oak, just to the right of the Arizona cypress at the left of the picture; half of the oak was broken to pieces by the snow a couple of weeks ago, and then twice before that. The oak has been here for twenty-five years, and the guy I live with was ultra-sad when he saw all the damage. It won’t grow back very quickly.

The sticks sort of in the middle there are another oak, which is smaller. Off to the right of that, in a “bunny-proof cage”, is yet another oak. The front lawn is between these two smaller oaks. where the flagstone is. These are scrub oaks, Quercus undulata, by the way. There are oaks all over the garden.

Well, so much for the front yard. He’s been working in it, some, though obviously nothing can be done today. The sort of things that you do today are, according to him, heat up chili on the stove, mope, listen to music, mope some more, talk to his friend on the phone (mope a lot less), and then go on very, very wet walks.

Here’s one of the rock gardens, taken earlier this morning, in the mist. I talked about how red everything looks, a while back, and you can see this now.

Looking a different way, toward the shed.The plastic thing in the back is a “portable greenhouse” for one of the irises that was in flower, and which he pollinated, hopefully to get seed. The area right in front may look all gravelly and bare, but it isn’t. There are small seedlings growing there. 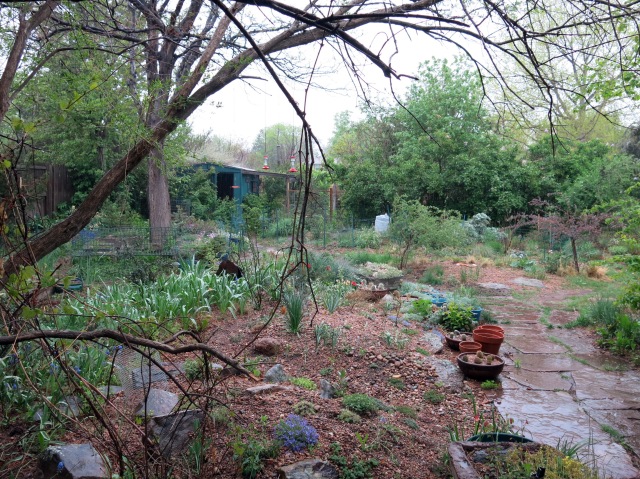 Speaking of irises, maybe you remember that a bunch of seedlings went to Denver Botanic Gardens, and more are going, later, but there are two downstairs that someone said may be the only two examples of this species in North America. They came from seed collected in Lebanon years ago (the seed stays viable for a very long time), and the guy I live with is going to give them to an expert grower so that maybe more seed can be produced. (They’re Iris sofarana var. kasruwana, if you wanted to know, and to look this up.) The plants are getting too big for the nanodome they’re in, downstairs, but they’ll go to their new home shortly.

I almost forgot to show you the movie that was made a couple of days ago. It started to rain here (May is a rainy month), and then not rain.

It thundered, which I’ve discovered I don’t like, and the guy I live with said it was “only pea-sized” hail, which we don’t worry about, “but still ….” Still what, I never found out.

I said I was going to show you what to do on a chilly, wet afternoon, and so I’m going to right now. This is what you do. (Without letting anyone dry you off from your morning walk, of course.) 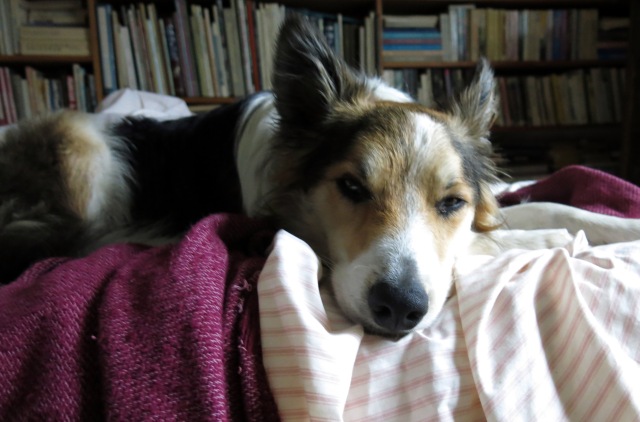 I guess that’s it, for this very damp and drizzly day. The sun is supposed to come out, eventually, I hear.