Greetings and salutations, everyone; yes, once again it is I, Mani the, oh, I guess completely normal-sized purebred border collie, filling in for the guy I live with, and here to bring you more news from our garden. You may remember me from such posts as “We-Are-From-France”, among so many, many others.

Here I am in a characteristic pose. I guess I was listening to something behind me. I can do that, you know. 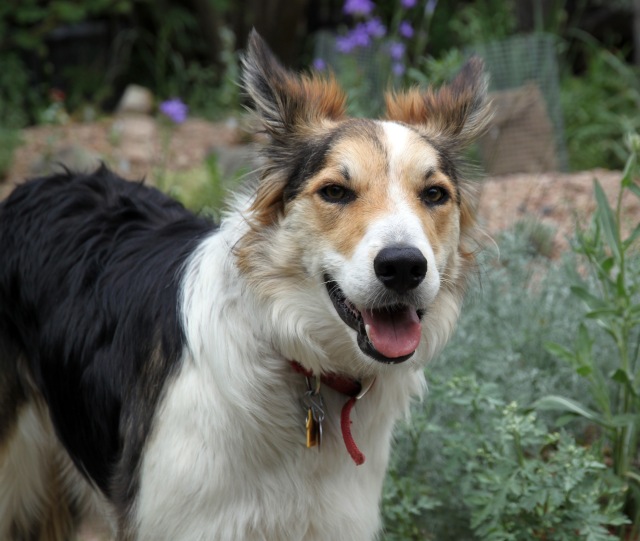 This is me doing it again. 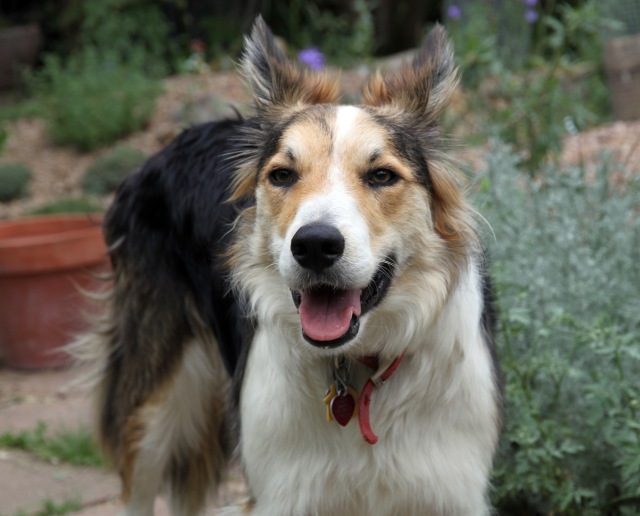 There’s stuff flowering in the garden right now. Not a whole lot of things, because the guy I live with thinks he’s being super-clever by not having a garden focused on plants that flower from now until, say, the end of August. There are some summer flowers, of course. The guy I live with is not a complete weirdo. But summer isn’t as colorful here as it is in a lot of gardens.

Here’s Allium cristophii; one that almost everybody has, and one that reseeds like crazy. So there are hundreds in the garden here now. 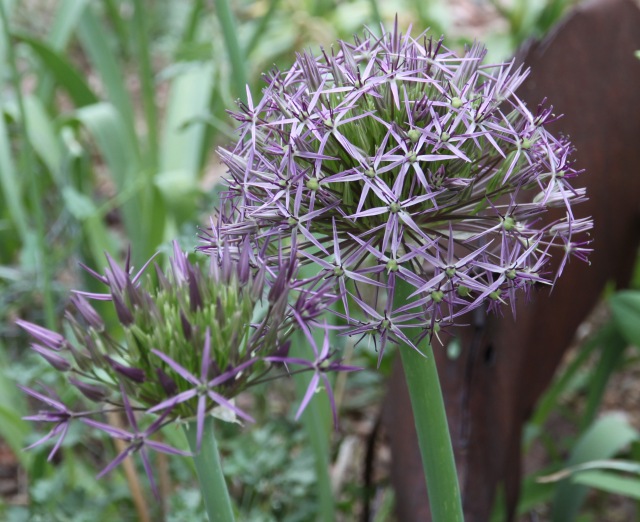 And Allium nigrum. We don’t know why it’s called “nigrum”, since it pretty obviously white, but maybe the anthers are black, or something.

I think this is Gladiolus italicus. It just started. The guy I live with figured out which one this was last summer, because he thought it might be G. imbricatus. The seed he got said “italicus”.

And Asphodeline lutea is starting to flower. 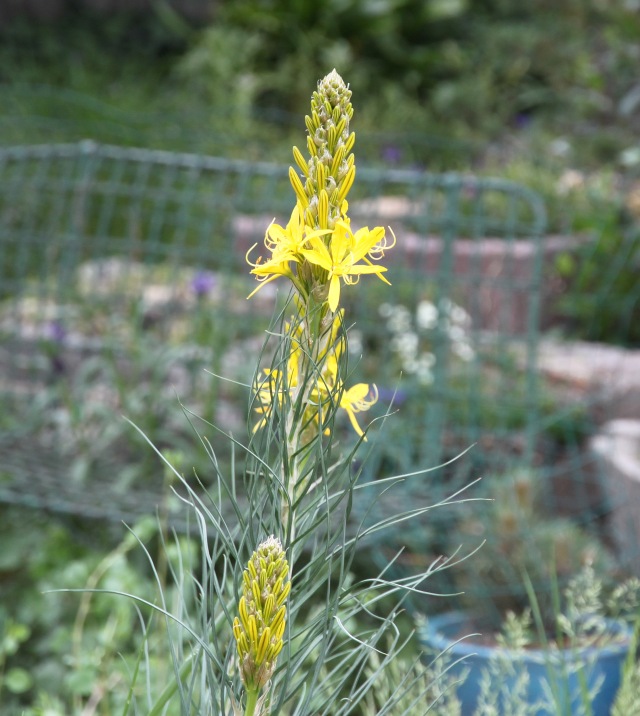 This is Oregon Sunshine, Eriophyllum lanatum, a favorite here. 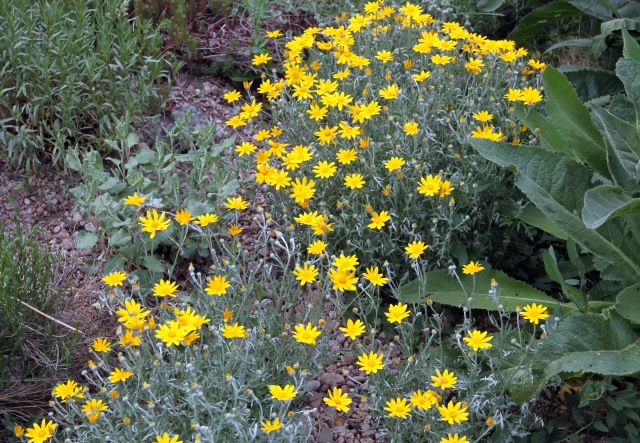 The big surprise of the year is the paintbrush that I guess just got its seed sprinkled on a couple of the troughs last autumn. This is the Wyoming State Flower, Castilleja linariifolia.

Rosa kokanica has just started, too. I hear there used to be a lot of roses in the garden here, but now there aren’t. You can’t really see the doubly-serrate leaf margins which are diagnostic for this species, but I think if you do a search for this rose on the blog, there are pictures of the leaf margins. The bees really like this rose, and it’s scented, too.

I guess we should talk about the sad thing now. But first, since this is happening in the front yard, take a look at Sphaeralcea munroana. (Maybe that species.)

Well, okay, the sad farewell part. It looks like the big desert willow, Chilopsis linearis, which has been here for thirty years, has finally given up. “Maybe not”, said the guy I live with, “but probably”. There are three other desert willows here that have leafed out completely. The big trunks there, that’s the desert willow.

The guy I live with said it was like saying goodbye to an old friend. I guess there’s been a lot of that around here in the last several years, and this is only a plant, but it’s been through everything “Denver’s horrible weather” can throw at it. I guess the seventy-three degree (F) drop in temperature over a forty-eight hour period in November 2014 was just too much for it. That cold snap did kill a lot of trees around here, too, I think.

The funny thing is that this desert willow is, or maybe was, from the farthest north known population, and supposedly the hardiest, but the desert willows here, from farther south, are just fine. Go figure, huh. Last year, the big desert willow didn’t leaf out until something like August. Those lines you see in the picture are some of last year’s growth, but they’re all dead.

I guess it’s pretty sad. The guy I live with says since we live here, we have to get used to such things happening, and not just occasionally. Like, all the time.

There might be other sad things going on in the front yard, too, because the Utah juniper was so disfigured by all the heavy snow we had that the guy I live with says he can’t stand looking at it, and might take it out. You can see how badly splayed it is in the picture of the desert willow. It’s in the upper right.

It was pretty hot today, for a purebred border collie anyway, and so I suffered a whole lot, until the thunderstorms began to roll in. The guy I live with does not like thunderstorms, and I might agree with him.

The storm you see here turned out to be the tail-end of a storm that dropped “ping-pong-ball-sized” hail, but fortunately it went to the southwest of us. The guy I live with said that hail that size is bad, and he held up a small lime to show how big that meant. Kind of scary, if you ask me. And why he doesn’t like thunderstorms.

There was thundering so I sat in the living room, in the dark. Quite sensibly, if you ask me.

It cooled off later, and that was pretty good. I guess that’s it for today, anyway. 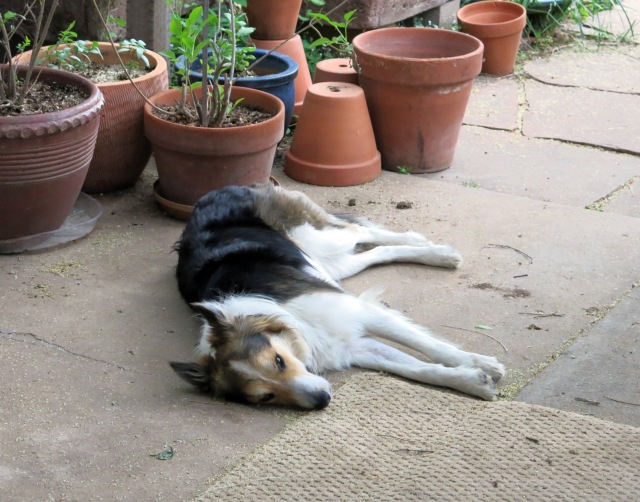 17 Responses to a sad farewell