Greetings and salutations, everyone; yes, once again it is I, Mani the purebred border collie, filling in for the guy I live with (who’s supposed to be weeding), and here to bring you the latest news from our garden. You may remember me from such posts as “A Two-Nap Day”, among so many, many others.

Here I am in a characteristically horticultural pose. This picture was taken the other day.

It wasn’t on the same day as the one where I was closer to the shed, but days here can seem a lot alike if we don’t do anything special, or if the weather is the way it can be. Every now and then we have a really nice day, but mostly it’s been dark here.

And, it looks like the gigantic ants are gone. The guy I live with said there were a total of seven ants, which sounded like a lot to me. He says it wasn’t.

Here are pictures were taken when it was “darker than it ought to be”. Asphodeline lutea, again.

Eriophyllum lanatum, “Oregon sunshine”.  One of our favorite plants. 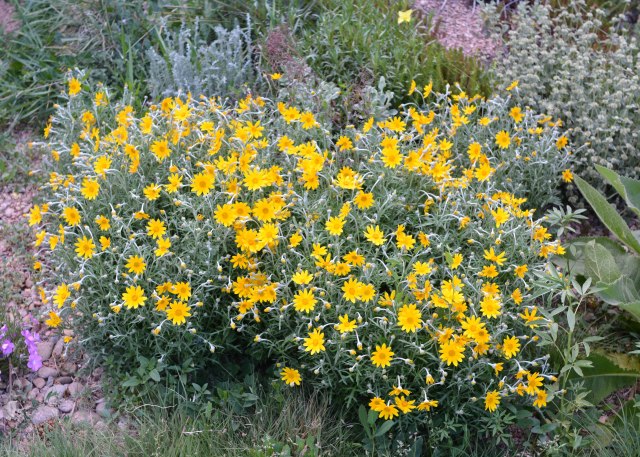 The rock garden, with grass growing through everything.

The guy I live with weeded there today, and got very frustrated. He says he’s going to find someone, like maybe in the phone book, who can come up with a curse he can put on the grass, and it will just wither away and die. Instead of trying to pull it out, one stubborn stalk at a time.

The lawn in the “way back” was newly reseeded with buffalo grass.  (The operating theory here is that if the grass seed is sown because it’s been raining so much, then the rain will stop….) The part on the right is too shady for buffalo grass, so more geraniums (Geranium macrorrhizum) will be planted there. 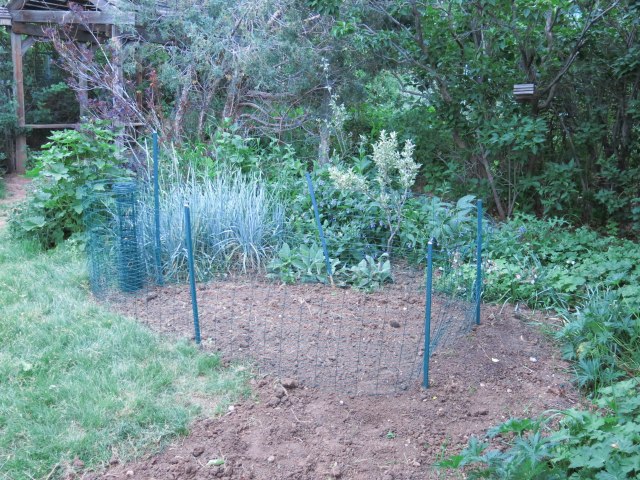 Really, though, the guy I live with intensely dislikes cloudy, dark weather, and says it’s a “betrayal of the idea of summer”, which, according to him, should be hot and dry. Temperatures of ninety degrees (about thirty-two Celsius) are best, because then the chance of thunderstorms is zero, and the humidity goes down. It isn’t very humid here anyway, but the humidity does go down as the temperature rises. At ninety degrees Fahrenheit the humidity might be five percent.

We both realize that not liking something over which we have no control at all is pretty silly.

If it thunders a lot, I get frightened, and sometimes I go to the guy I live with for comfort.

It’s been rainy and cool here so often that the hawthorn, Crataegus douglasii, got rust–again–

and so the whole little tree was removed. Just like that. (The hawthorn was also planted too close to the juniper; we think this is cedar-hawthorn rust.) True, the guy I live with is a very fickle gardener, but the hawthorn got rust every spring.

Every now and then (I know I’m rambling a little), the sun is out, and these two pictures were taken when it was. Yesterday, I think. The wrought-iron thing that held the solar lamp (which apparently has given up the ghost) is indeed crooked.

Salvia greggii ‘Furman’s Red’ has started to flower. It usually stops during the summer, and then starts flowering again when autumn comes–if it rains. (If you enlarge this picture you can see the tiny bee on the bottom flower.)

The guy I live with was going to order some more hens-and-chicks but didn’t get around to it, but he said he might order them later in the year. He took this picture of one growing in a pot. (I see the oxalis growing there….)

And you know what? Remember my post, “A Sad Farewell”, where the guy I live with was certain that the big desert willow in the front yard had died? It started leafing out a few days ago, and not just down at the bottom like last year. The woody thing in the lower left is the old trunk.

The guy I live with says that this plant (Chilopsis linearis) loves hot weather. I’ve already heard the rant about how summers are supposed to be hot, because we’re closer to the sun, and stuff like that.

Here, taken as the sun was going down, is a picture of Oenothera caespitosa.  Another favorite plant. The flowers open at dusk. In other words, they’re crepuscular. The flowers are scented of lemons.

I really did ramble, didn’t I? You should see me on my walks, if you think this was super-rambling. I guess I’ll let you go now, with a picture of me looking a bit wistful.