“nor can you lavender”

Greetings and salutations, everyone; yes, once again it is I, Mani the purebred border collie, filling in for the guy I live with, and here to bring you the latest news from our garden. You may remember me from such posts as “Lavender And Ice Cubes”, among so many, many others.

Here I am in a characteristic pose. Thinking about things. 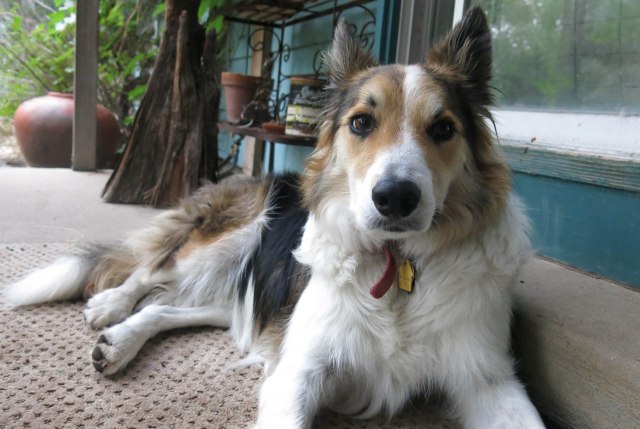 Today was a pretty good day, even though at about 3:15 this afternoon there was a severe thunderstorm with “half-dollar-sized hail” headed toward us, and the guy I live with more or less freaked out, because we don’t often have weather like that in August, and even if we do, it usually isn’t headed toward us, more out toward the east. It turned out that it wasn’t quite headed toward us; it veered off and dissipated, from what we could see on the radar page. There was a big sigh of relief here.

Yesterday the guy I live with moved an Apache plume (Fallugia paradoxa) which had been planted in the back border just a few weeks earlier. He thought it would be happier in its new location, but after he planted it he realized it was too close to everything, and so moved it again. He said this is why so many plants here rarely return the next year, because they’re moved once too often. I guess he could have thought about the new location a bit more, but he was facing “the wrong way” when he planted it, and didn’t look at the new position from the opposite side. “Always look everywhere”, he said.

The Apache plume will actually grow in awful soil. He planted one across the street, in the little garden he made for his neighbor; the soil was the heavy clay subsoil which was spread on top of the good soil when the houses were built, and full of silver maple roots, but the Apache plume thrived, and even seeded around a bit.

Then today a shipment of lavenders came in the mail, from Goodwin Creek Gardens. This is the third time he’s done this in the last several years. The first two times he gave away the lavenders. I don’t know why. He likes lavenders but maybe he wasn’t ready for a big planting of lavenders, or something like that. 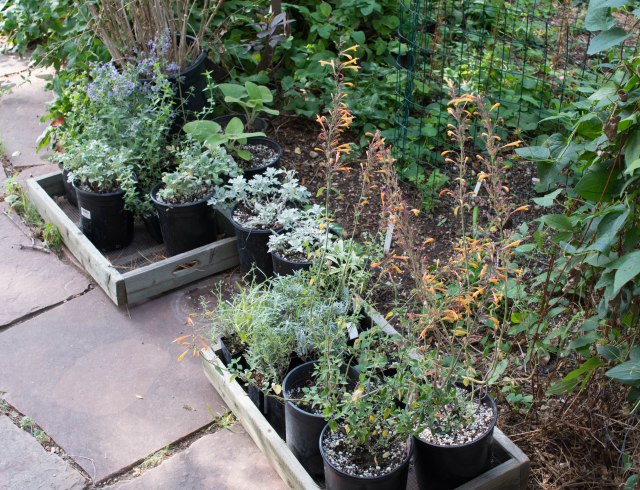 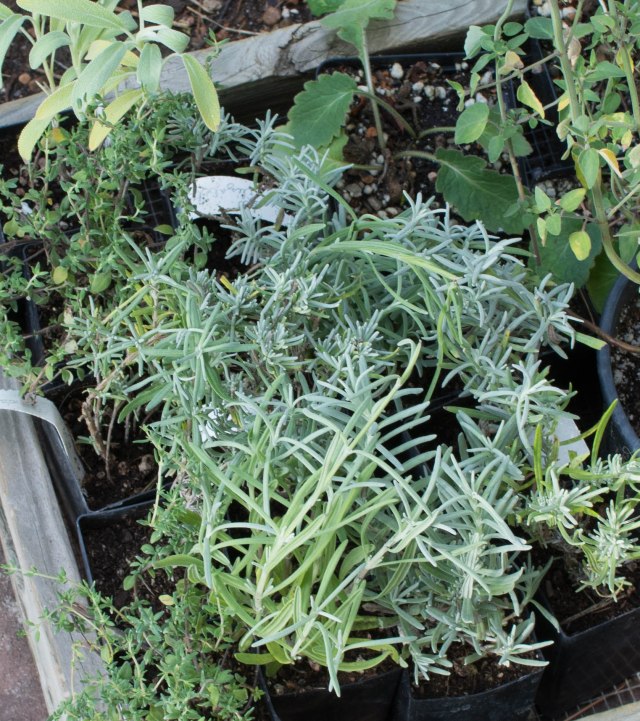 Some of these lavenders are going to be planted in the raised bed in the middle of used to be called “the lawn”, but obviously isn’t one, now. You might say, by looking at this picture, that there are a lot of cow-pen daisies (Verbesina encelioides), and that would be right. 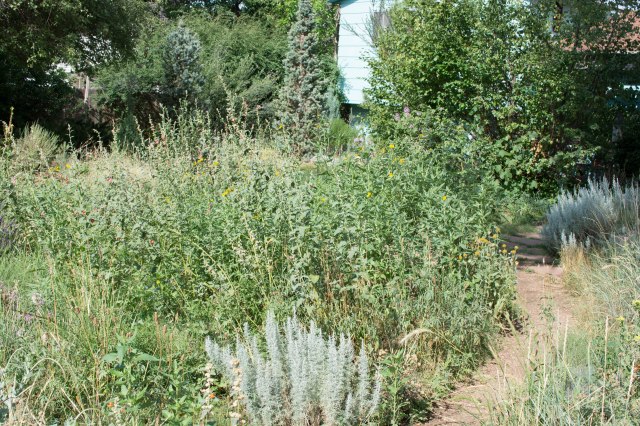 There are some sphaeralceas, or globe mallows, and also beeplants (Cleome serrulata, though it has a new name like Peritoma or something). 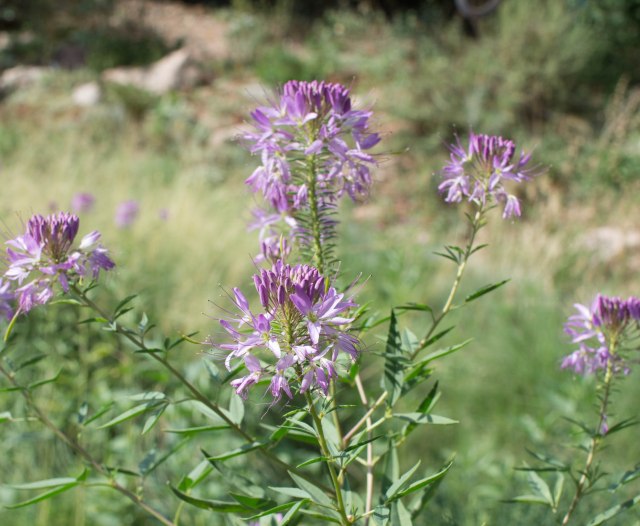 The soil in the berm is nothing but gravel and sandy loam. Mostly gravel. 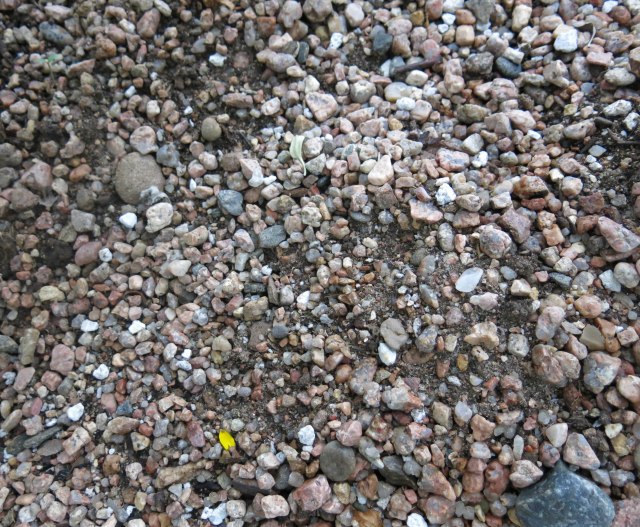 So when it rains, the rain penetrates this soil down to the roots a whole lot better than in does in the clay. The soil is drier at the top of the berm, of course, than at the bottom, so the lavenders will be planted near the top, because at the base of the slopes the soil is quite wet. At least relatively so. Almost everything is relative here.

Either some of the cow-pen daisies are going to have to be pulled up, or planting will have to wait until frost kills the daisies. They’re annuals. They weren’t really supposed to grow on the berm, but they did, and no one did anything about them when they started to come up. It’s true that there are hundreds elsewhere in the garden and maybe some on the berm can be sacrificed.

There are also cow-pen daisies in the horse pasture next to where I go to Day Care.

The lavenders would have been repotted today but there’s no more sand-and-perlite mix to do the repotting with. And there was a bunch of furious moving of plants and shutting of windows because of the threat of the storm.

If you look at the first lavender picture you’ll see the orange-flowered agastaches, Agastache aurantiaca, in the flat. The guy I live with has tried to grow these repeatedly in the last twenty years or so. This will be a “serious attempt in the right type of soil”, so the plants don’t need so much watering, in theory.

One of the things he says is useful is to look up the soil type and rainfall patterns of the plant in its native habitat. Regardless of what labels suggest. Without doing a bunch of quoting from botanical literature and websites, I learned that this plant is native to the Sierra Madre Occidental, in Mexico, in pine-oak forests, grows on talus and porous soils like that, experiences a very dry spring (compared to here) and then gets about fifteen inches (thirty-eight centimeters) of rain in July, August, and September. Way more rain than we get here. Flowering is from August to November, obviously triggered by all that rain.

So the agastaches are going to be planted on the berm, but closer to the base, so they can get more water. Not the fifteen inches of rain (or water) in three months, but maybe this will work.

Judging from the skies we had this evening, you would think that we get tons of rain. 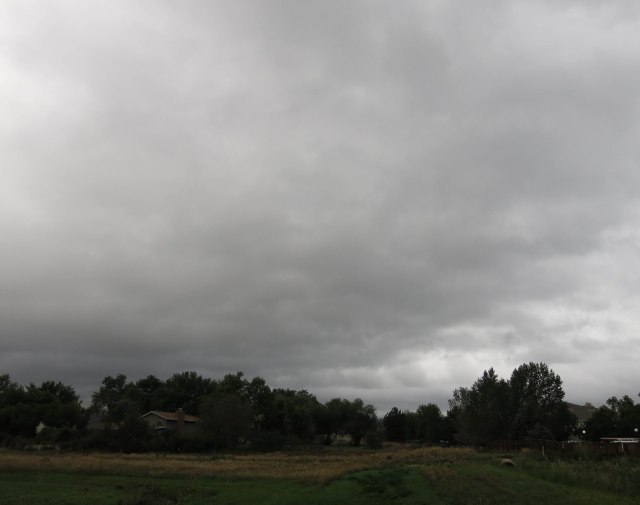 But it’s pretty much looked like this since the middle of June. The sun did come out for a while today; that was nice.

Oh. You may wonder about the title of my post today. The guy I live with says that “Nor can you lavender” is one of his all-time favorite sentences. It’s found in The Adventurous Gardener, by Christopher Lloyd (one of his favorite garden writers). The sentence before that is “In any case you can never rejuvenate them [rosemary] by cutting back.” “Nor can you lavender.” The guy I live with says this is “totally excellent”.

Well, it turns out that he had wanted to use this quotation for quite some time, and thought it was in Lloyd’s book The Well-Tempered Garden, and he looked and looked, remembering that it was on the right-hand page, down at the bottom, early on in the book, but he got the books mixed up.

I know this has been a kind of rambling post. What can I say? I’ll leave you with a picture of me, in my fort, washing my paw. I do that a lot. We purebred border collies are very fastidious about our appearance (though we prefer not to be brushed). 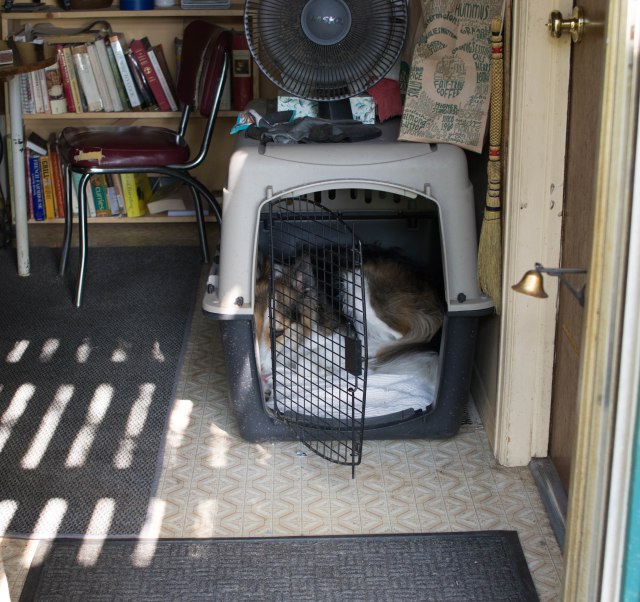 2 Responses to “nor can you lavender”