that time of year

Posted on December 8, 2017 by paridevita

Greetings and salutations, everyone; yes, once again it is I, Mani the purebred border collie, filling in for the guy I live with, and here to bring you up to date on the latest news from our garden. You may remember me from such posts as “For Whom The Bedclothes”, among so many, many others.

Here I am in a characteristic pose. I was wondering when I was going to get my dinner. 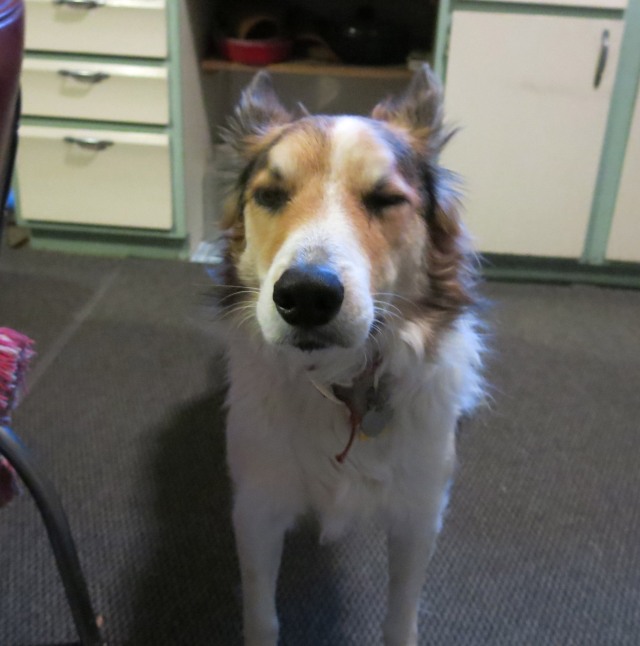 Here I am again, shortly after my dinner (which was excellent), wondering when I was going to get to go on my evening walk. It turned out to be as soon as the guy I live with put down the camera. 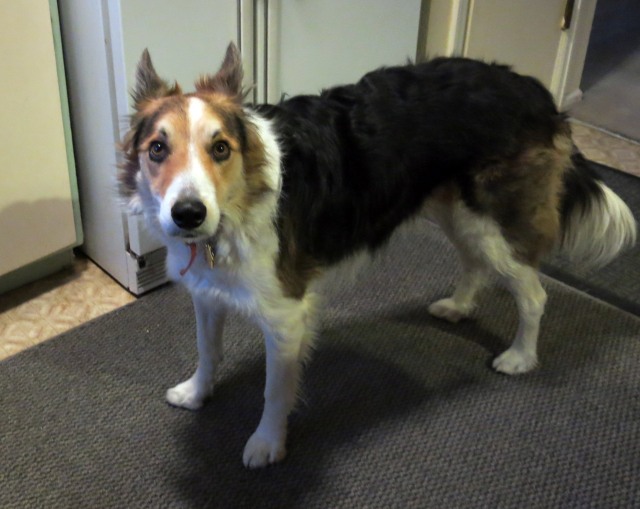 The weather here has changed a bit. It suddenly got colder a couple of days ago, after a bunch of wind. 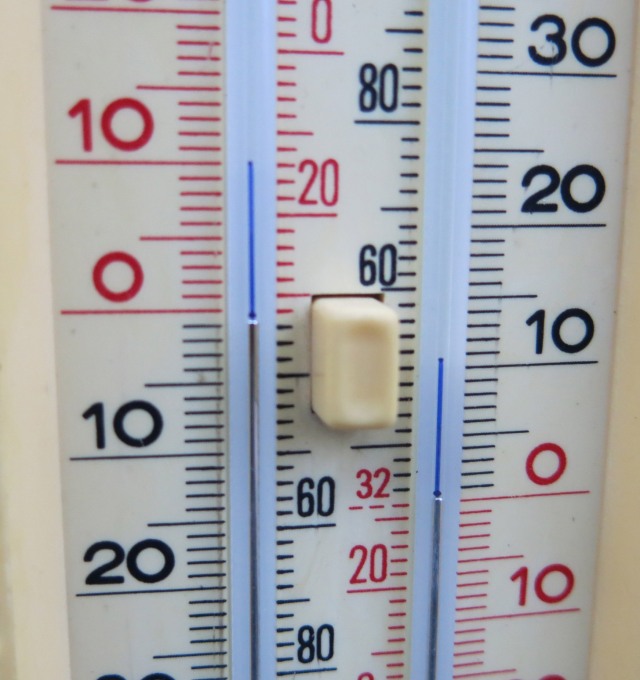 So gardening kind of stops here, especially when the guy I live with says it’s too chilly to go out and do anything. That doesn’t include my walks, fortunately.

There are lots of little cyclamen seedlings in the part of the garden where there are cyclamen. You can see that they’ve curled their leaves, some, in response to the cold. But still, this is encouraging. 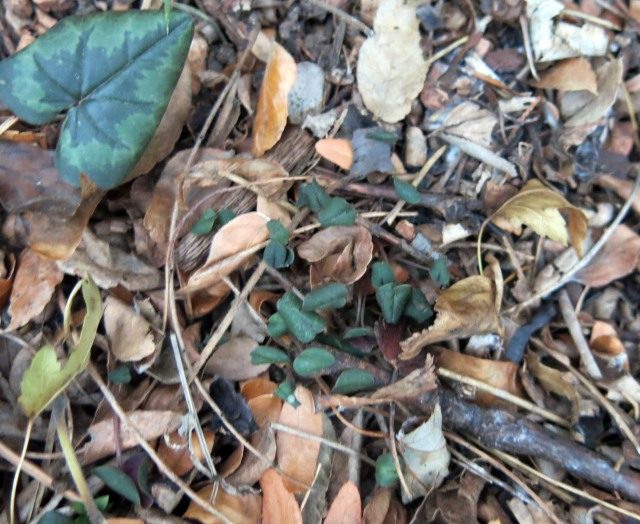 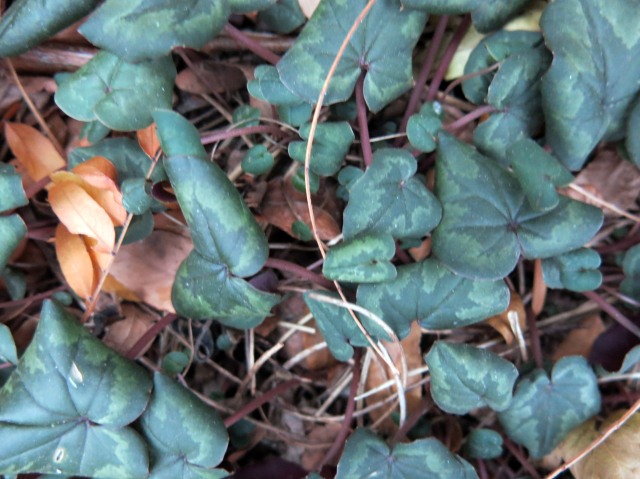 He took these pictures before I went on my evening walk, to provide some sort of gardening interest, I guess.

Maybe you can see how chilly it is just by looking at this. This is the field behind our house, which is behind and to the right of the tree on the left. The foothills you see there, looking more or less south (say, towards Tucson), are not very high. 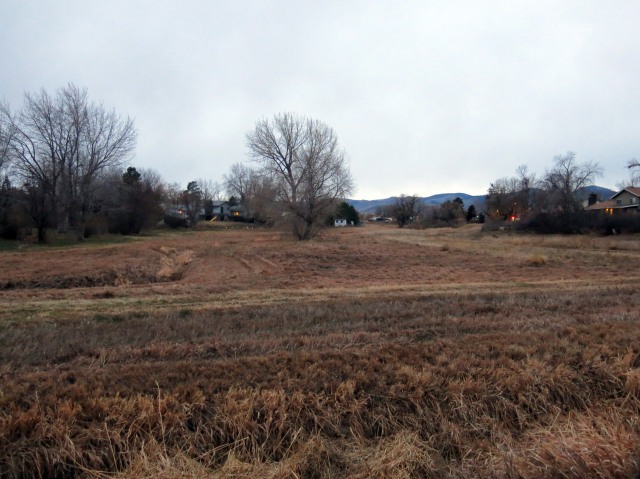 The foothills directly west of us are a bit higher, about 7800 feet (2377 meters). The guy I live with took a picture of them the day before when there was a pretty good sunset. That’s Mount Falcon on the right. Where they were going to build a “summer White House” back when Woodrow Wilson was president. But they didn’t. 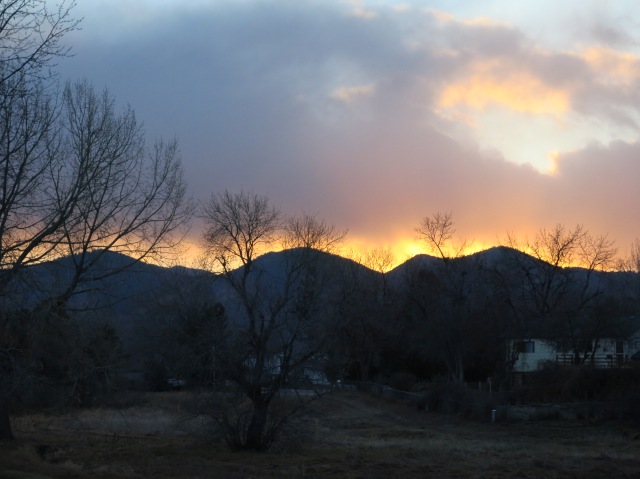 Anyway, the walk this evening was pretty nice, if a bit chilly.

I looked at things. For some reason the pictures of me turned out to be monumentally unfocused, but at least you can still tell it’s me, and that’s the important part. 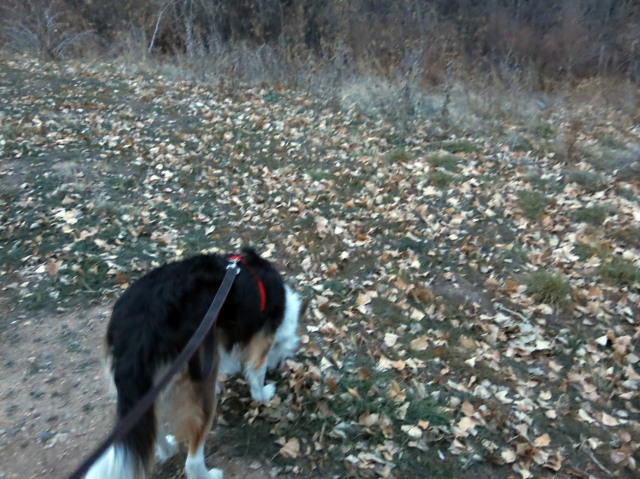 If you didn’t know, we dogs like sniffing things as much as we do walking, and so it’s important that I check out whatever needs to be checked out as I’m walking. Sometimes this drives the guy I live with crazy. He’s all wanting to keep going, but I’m like, there’s something else here that I need to investigate. It is my walk, after all. And so he does let me linger.

For some reason this picture doesn’t have me in it, which I think is a shame, since it would have been so much better. 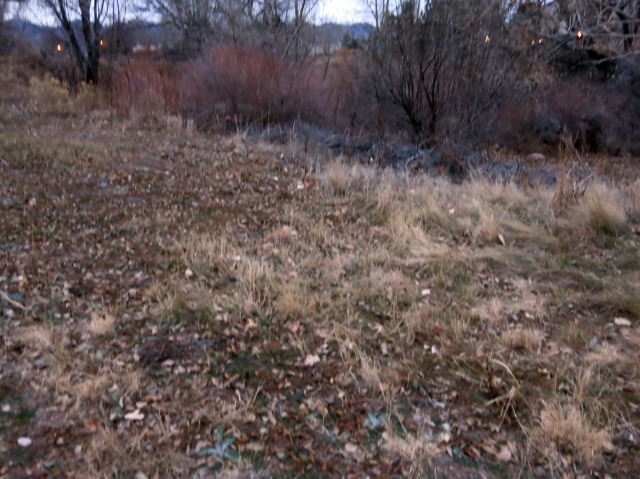 He hasn’t worked for ten years but often thinks about this time of year, when he was working, and how it would be really, really cold and he’d be working, late into the night, all by himself, and then come home, and the house would be all decorated with lights, and there would be a tree, with lights, and even though the holidays were really hectic with driving back and forth constantly, visiting people, and most of the fun was sucked out of the holidays that way, with him only having the one day off and having to drive and drive all over town, there was still a little bit of time when he could sit on the couch with the purebred border collies who lived here at the time, and look at the lights on the tree, and there was this sense of quiet beauty, and he could feel pretty good about things, before he had to go back to work the next day.

And now all of that is gone.

The guy I live with’s friend lost her mom a couple of months ago and she asked him if he’d go with her to a “coping with the holidays” thing for people who lost loved ones, and he said he would, so they went, and I guess it was pretty good. One of the things he said was especially good was the person giving the class said that you would always be sad, just be able to live with the sadness more as time went by. The guy I live with can be pretty sad at this time of year, but he lives with it. And, of course, he lives with me, and I make everything much more delightful, as I imagine you know.

Well, what this is all leading up to is that he got to talking with a friend and eventually a Certain Subject came up, which I haven’t talked about before.

And what that is, is the unfinished novel and huge stack of poetry sitting downstairs. The guy I live with said he knew about it all along, because he would go downstairs and his wife would be writing in these notebooks.

He didn’t know what to do with all of it, and it just sat there.

His friend suggested that he burn it.

The guy I live with thought about this for a while and decided that it was one of the rare bits of advice that was actually good. Most of the advice people give to people who have lost loved ones is stupid beyond belief, or even hurtful, according to the guy I live with, but this was good. His wife never wanted him to read this, and he certainly wasn’t going to do that, or share it with anyone. So it was going to be burned. 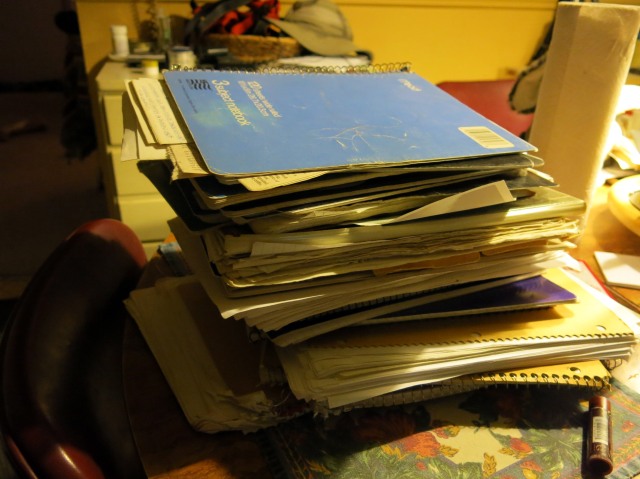 Of course, “not being a complete idiot”, he leafed through a bit of it, first. Not reading, just looking to see if there was anything other than writing there. Certainly not money. 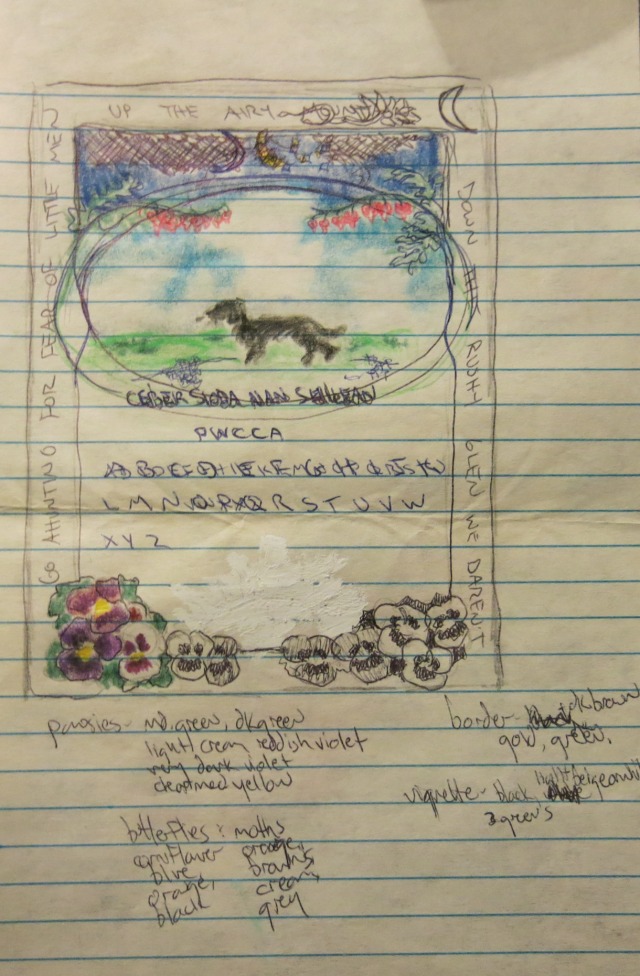 That’s a picture of the late Pooka, whose named was really spelled “Pwcca” in the Gaelic way. He was the first purebred border collie to die, even though he was the second one who came to the house. The guy I live with’s wife was utterly devastated when Pooka died.

When he saw this he cried and cried. She really loved her “black-and-white boys”. The guy I live with constantly says she would have loved me, too, and maybe even more, because I’m different, and, of course, beyond totally excellent.

He showed it to his other friend, the one he goes to see all the time (I really like her, too) who likes Scottish things (the old Scottish poem around the border reads Down the rushy glen/ we daren’t go a-hunting/ for fear of little men/ up the airy mount.) She said it looked like a sketch for a sampler, which made perfect sense. It was probably going to be a memorial sampler.

He saved this and will probably have it framed.

A whole bunch of stuff was burned this evening. Technically I guess you’re not supposed to burn paper but the guy I live with said to say he was trying to start a fire in the chiminea.

He saved this too. This is the late Chess, when he was super little. He was on the bed upstairs, but before the soft Pottery Barn sheets were acquired. 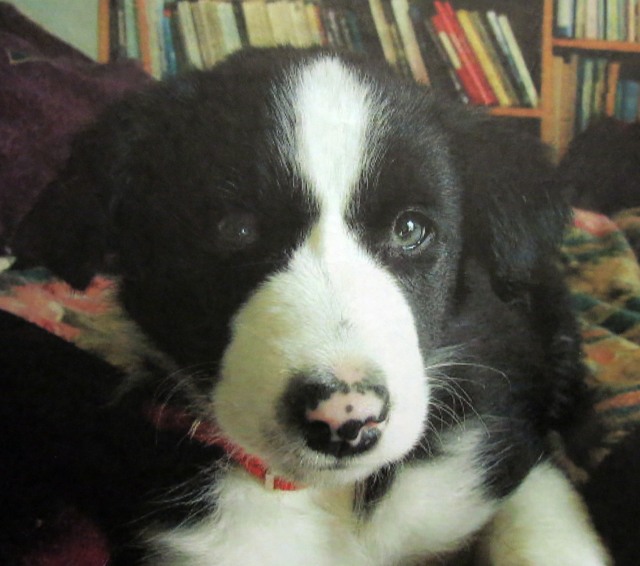 His nose “eventually filled in”, which was a relief to hear. The guy I live with said he called him “Piglet Lips” when Chess was really little, because he looked like a piglet. And then later he called him “Piglitty” even though his nose had filled it. There were even Piglitty songs. I sometimes get to hear them on my walks. Any song featuring purebred border collies is high quality, if you didn’t know.

So that’s what’s been going on. Not much gardening. The guy I live with says we won’t have a tree this year, even though people tell him he should, because he knows that’s not what he wants, and anyway, having a tree in the house sounds kind of scary.

I do notice that certain things I’ve never seen before get set out, little things, here and there, which is interesting, at least for a while.

Well, so anyway, after all this, guess what happened tonight? 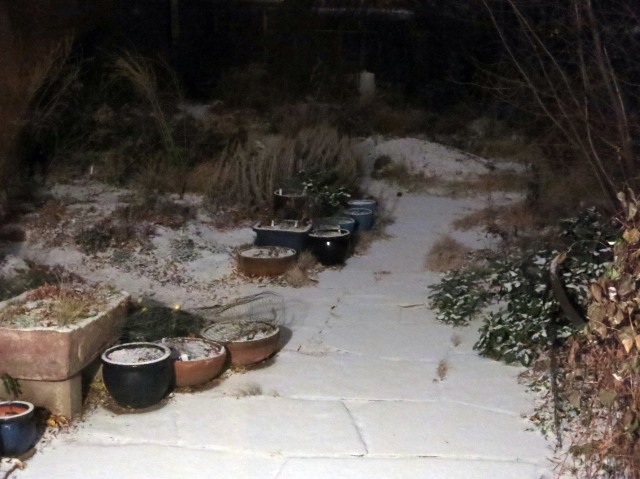 I thought it was promising, but the guy I live with said it was supposed to warm up and get nice again.

I know this has been a really rambling and possibly sentimental post. It’s “that time of year”, according to the guy I live with. Sometimes he knows stuff.

I guess I’ll let you go, with another not-hugely-in-focus picture of me. In fact this one is so unfocused it made me wonder, until the guy I live with claimed that it gave the impression of great speed. 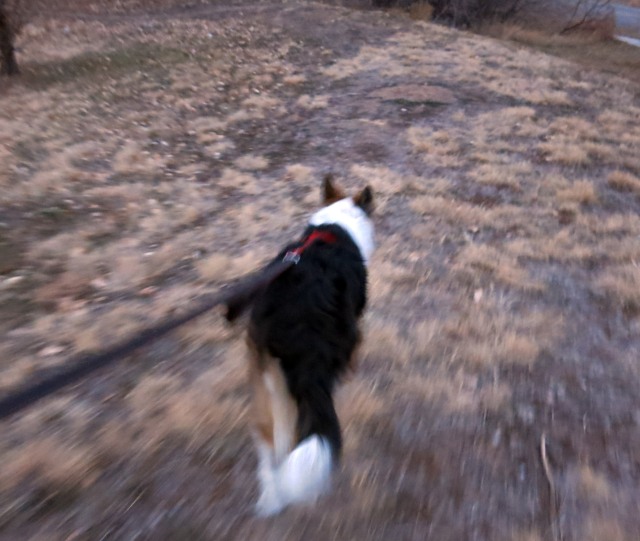 22 Responses to that time of year