the tunnel of vole

Posted on February 2, 2018 by paridevita

Greetings and salutations, everyone; yes, once again it is I, Mani the purebred border collie, filling in for the guy I live with, and here to bring you up to date on the news from our garden. You may remember me from such posts as “Another Fantastic Week”, among so many, many others. 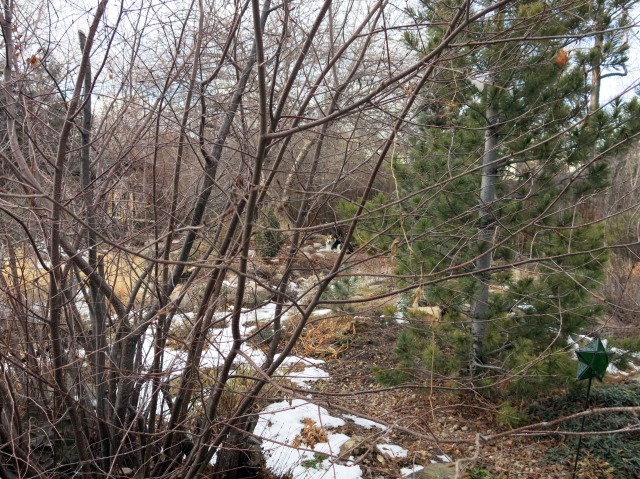 Nothing like lying in the garden, in the sun, chewing on a pine cone, I say.

There hasn’t been a whole lot of sun here lately, though as you can see quite a bit of the snow has melted. Yesterday was cold and cloudy. The guy I live with said that clouds were pointless unless they brought rain, drizzle, or mist, but sometimes it’s cloudy without any precipitation at all. “Like last summer”, the guy I live with said. I remember all the complaining.

Hardly anything has been happening here, as usual. Well, that’s not quite true. On my walk yesterday I came upon something quite unusual. Unusual for me, that is.

The guy I live with said that these were called geese. The same birds that fly overhead all the time, honking like an aerial traffic jam, but this time they were on the ground.

He said that at this time of year there were more geese than people along the Front Range. I don’t know why I never met them before. They were pretty big, as you can see. They’re Canada geese, and they fly down here from up north because our winters are supposedly less cold than where they live. Sometimes you do see them in the summer, here, too.

He also said that one of them is called a goose, but more than one are geese. I don’t know how anyone learns to talk, with rules like that.

There was also a big hawk in the cottonwood. We see the hawks every day. Maybe you can guess one thing they catch, if you keep reading.

You can see the coyote path I’m walking on. My house is where the path turns to the right, just ahead. I’ve been working on making the path perfect, since the one on the other side of the creek was wrecked by mowing. There was too much mowed grass to be able to find the path again.

The hawk flew away before we could get a good picture of it. The hawk must find me terrifying. But you can see it in the tree. 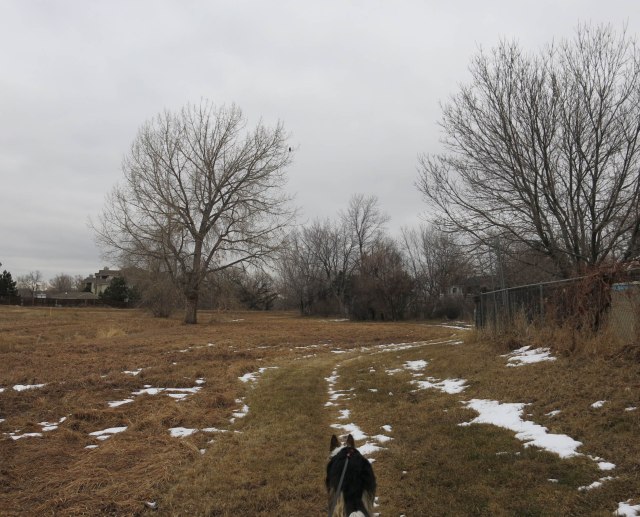 There are snowdrops in flower, and so at least one of us is excited. Snowdrop don’t fully open their flowers unless the temperature is above fifty degrees Fahrenheit, so it’s obvious that it hasn’t been that warm. But still, flowers in the middle of winter are delightful, I hear. 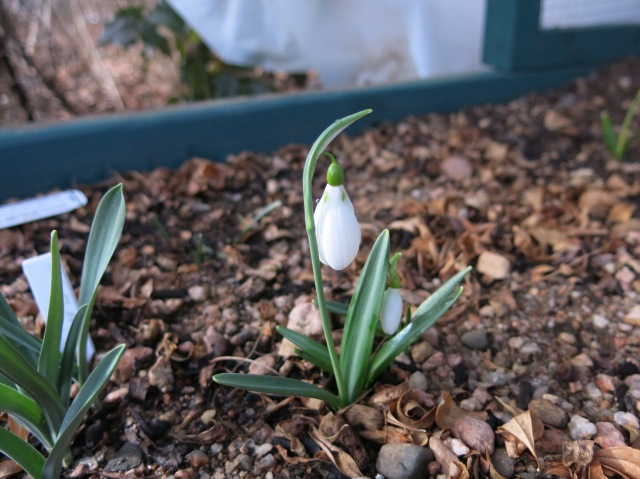 ‘Brigadier Mathias’ in the frame. 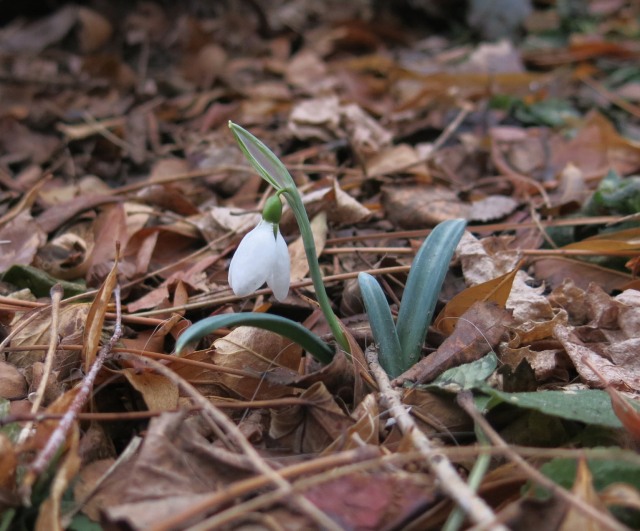 The last one has a funny little story attached to it. He and his friend got a clump of these bulbs a while back; he persuaded her that snowdrops were excellent, and so they planted most of them in her garden, and a few here. Last year her snowdrops were in flower in the middle of January, and this year they were in full flower on the seventeenth. The guy I live with tried desperately not to be jealous.

The soil here is frozen solid; probably because it snowed and then got warm over and over again, and some of the snow melted down into the ground, where it froze the soil. The soil usually doesn’t freeze, or, of it does, it’s just the very top layer.

The guy I live with said that during the winter there are creatures called voles that make tunnels and eat plant roots and do all kinds of damage. He said that there were voles in the garden here, years ago, but that Flurry, the first purebred border collie who lived here, really detested them and got rid of them. That’s how he described it.

The voles did come back the winter after his wife died and they destroyed a third of what was called The Long Border, and so he decided to take out the remaining plants there and do something entirely different. Then the voles stopped coming, which was fine with him.

On one of our walks I saw the tunnels voles made. 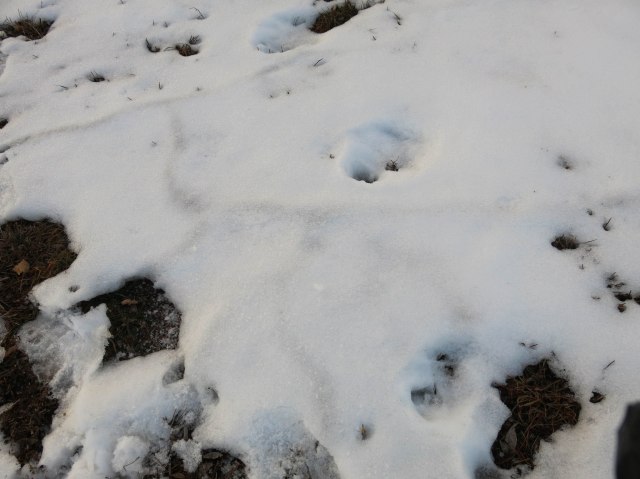 I looked at the tunnels but didn’t think they were all that interesting. However, the guy I live with bought me a new long leash (because the old one had knots in it) and I quickly learned that I could wander off the path out into the grasses in the field. He said this didn’t make for much of a walk, exercise-wise, but I don’t really need all that much exercise since I get plenty racing around the back yard, monitoring stuff.

Anyway, I quickly discovered that when I wandered into the grasses I started hearing things, and smelling things, things I hadn’t heard or smelled before.

There are voles in the long grass.

So this is kind of what we do now. My walks have turned into vole hunts, and looking for geese. The geese are easier to find. Hunting for voles is really enjoyable. I don’t know what I’ll do if I find a vole, but I have no doubt the guy I live with will say not to do that.

16 Responses to the tunnel of vole