Greetings and salutations, everyone; yes, once again it is I, Mani the purebred border collie, filling in for the guy I live with, and here today to bring you completely up to date on the latest news from our garden. You may remember me from such newsworthy posts as “The New Berm”, among so many, many others.

Not hugely in focus, of course. I’d just had a nice drink of water and was waiting to get a couple of Fruitables. They’re really good.

So is our water. We get Denver Water Board water, which is not only inexpensive, it tastes great. The guy I live with said that it’s easy to get icky-tasting water in cities around the country, but that Denver Water water is some of the best.

There are things finally going on, here, which is a relief to me since I don’t have to hear about the endlessness of winter or how cold someone is all the time. The change to Daylight Savings Time was pretty weird, but I managed it all right.

It did look a little chilly this evening, but it wasn’t. 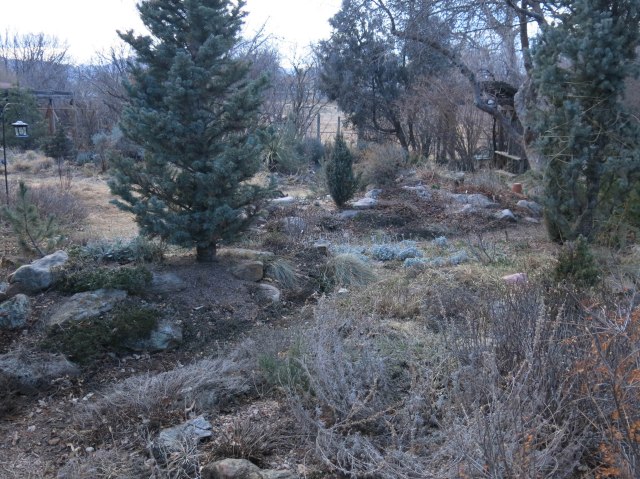 There are crocuses in flower. More or less everywhere. 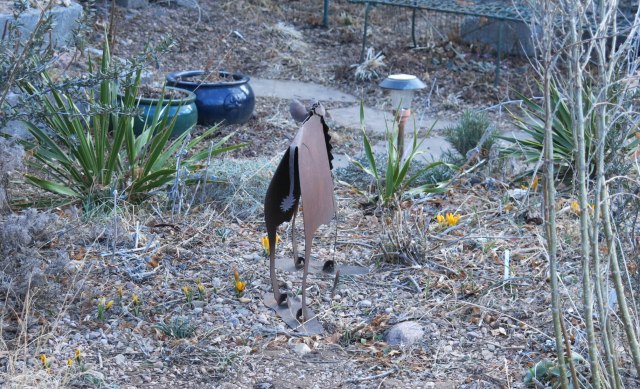 The white ones here are called ‘Snow Bunting’. You can get this variety anywhere, and it’s still one of the best. That’s the tail of a French scare cat on the right, if you were wondering.

Still snowdrops, too. This is part of the main group. With scare cats. (Only one in the picture.)

The snowdrops in the frame are done now.

A little fence was built right next to the frame, to replace a kind of ugly wire fence. There’s a big clematis just on the other side which will cover most of the fence. The fence does look kind of tacky right now but the guy I live with said to wait for a while, and see.

Some bulbs are up “way to soon”, though the forecast doesn’t call for much freezing at night, now. This is Fritillaria raddeana. We have a large collection of “frits” here.

Some of the coldest weather can come in April, and so we have to be prepared to cover these things at night. By “we” I don’t actually mean me, of course. Though I could guard the frits, if necessary.

The mosses in the troughs have turned green. 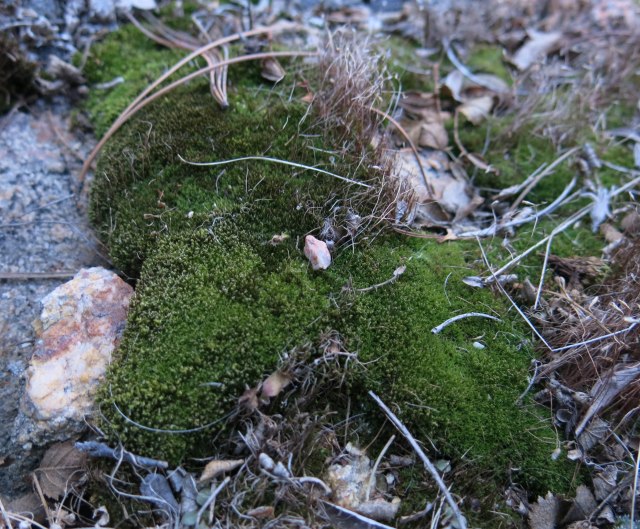 The moss pictures aren’t as in focus as they might have been. The guy I live with cultivates moss in two of the troughs, and it does quite well here. It’s a native moss of some kind; can go completely dry in the summertime.

This is left over from when the guy I live with was super seriously into rock gardening, and there were all these cool plants in the troughs, but then things changed and a lot of plants died. Except for the mosses.

And if you remember the last post where some calochortus seeds had germinated, this is what they look like now. 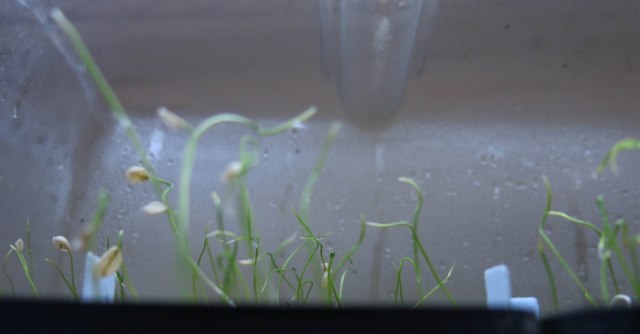 So that’s the gardening, here.

My walks have been about the same, which of course means excellent. The geese are still here. 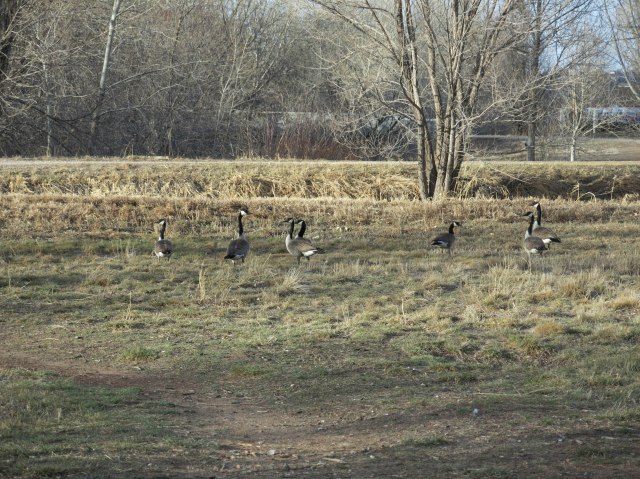 I got to hunt for some voles, today, too. The guy I live with said it’s possible I could be imagining things, all these voles rustling around under the grass. But I looked anyway. 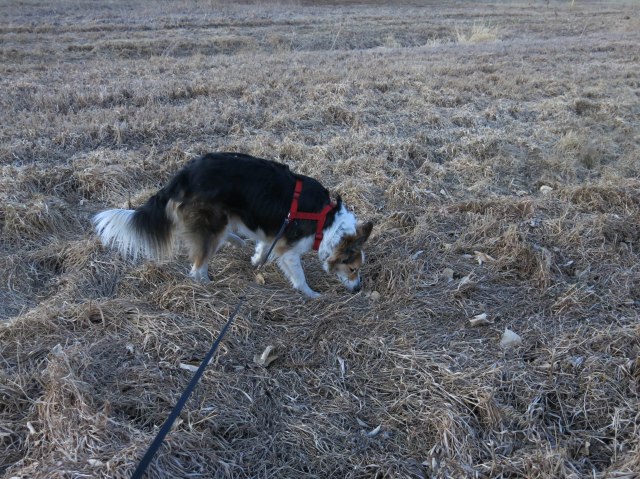 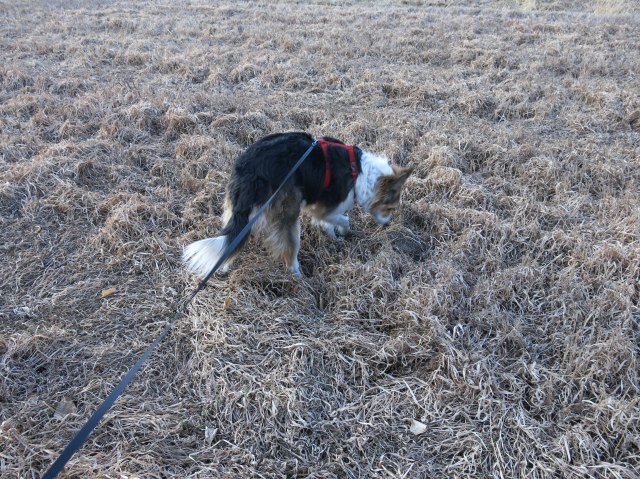 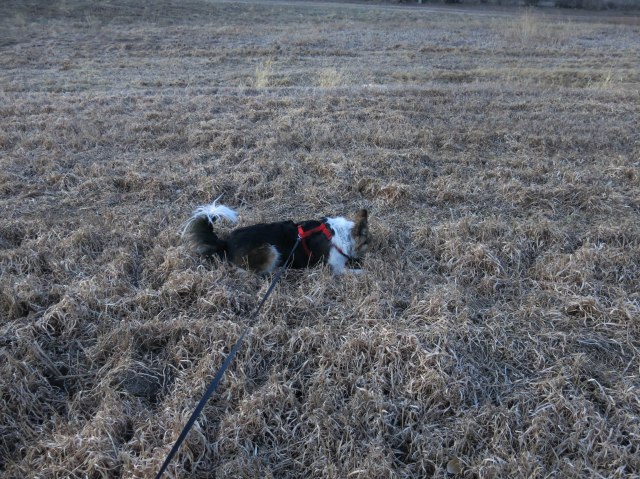 The guy I live with said not to stick my nose in there but I did, because I wanted to.

The only thing we found was what I was sure was a giant egg of some terrifying prehistoric creature. The guy I live with said it wasn’t.

I’m fairly certain that’s all for today. If that egg hatches and it’s something scary, I’m not going to like it. But meanwhile things are okay. I thought you might like a short movie of me getting a biscuit; I do have a speaking role here. And notice how I stare at the cabinet where the biscuits are kept, to make sure I get one.