Greetings and salutations, everyone; yes, once again it is I, Mani the purebred border collie, filling in for the guy I live with, and here today to bring you right up to date on the latest news from our garden. You may remember me from such posts as “A Bit Chilly”, among so many, many others.

Here I am in a characteristic pose. This is my interpretation of how things have been going lately. 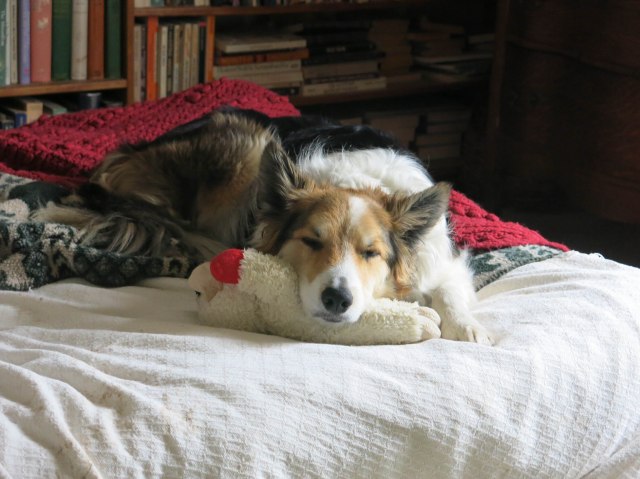 Just like the post I mentioned, from last year, it’s been chilly and not very pleasant here lately. “Snowing way too much”, according to someone I know. 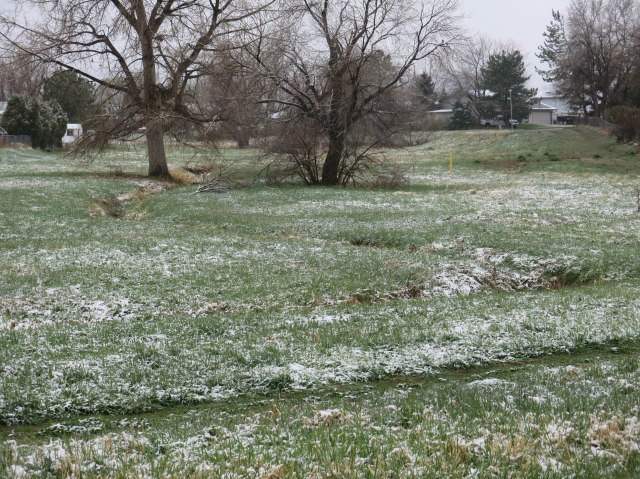 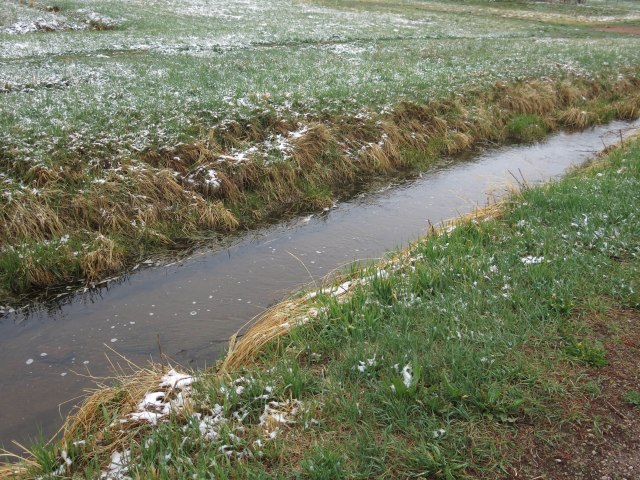 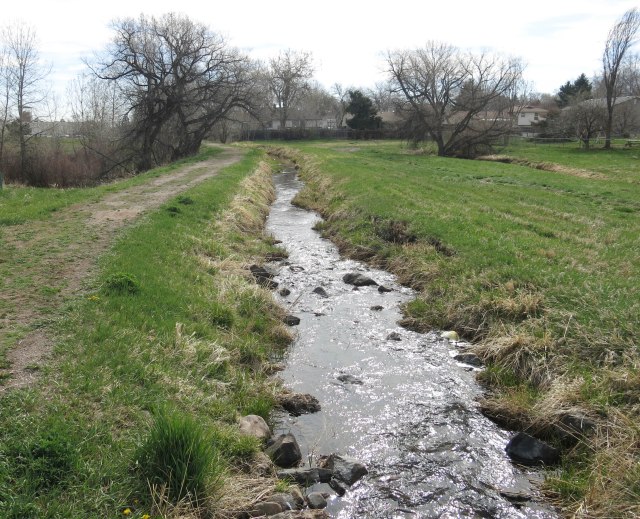 The muskrat is back; the guy I live with said it seemed bigger than last year. I looked for it but couldn’t find it. Maybe on another walk. 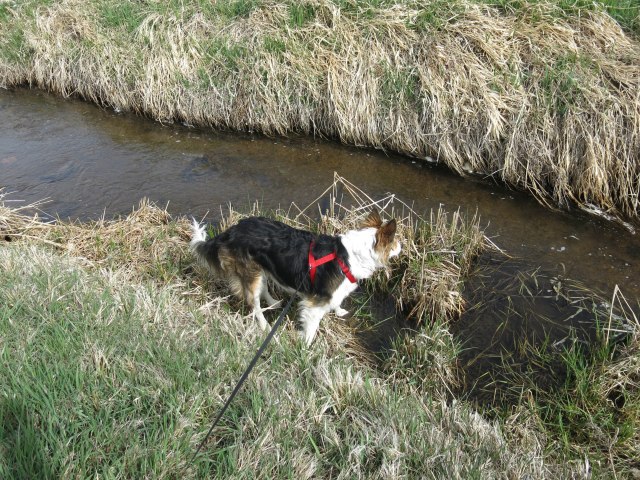 I looked for voles too, but I think it was too cold for them to poke their heads above ground. 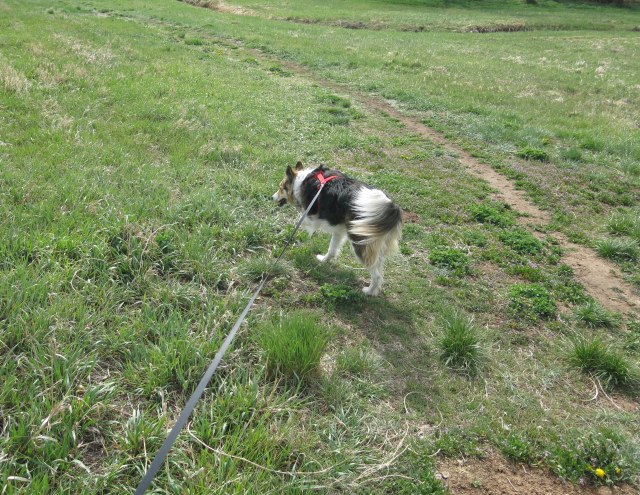 The wild plums are flowering. The guy I live with said that back in the last century they were a sign of spring along the Front Range, but the last few Aprils have been so cold that you can hardly ever smell them. Here they are, along the canal road. I was ready to keep going but the plums needed to have their picture taken. The guy I live with said the plums make a really good jam, but he’s never made jam. Just eaten it. It’s best on toast with lots of butter. So much butter that it gets the toast soggy before you spread the jam on it. 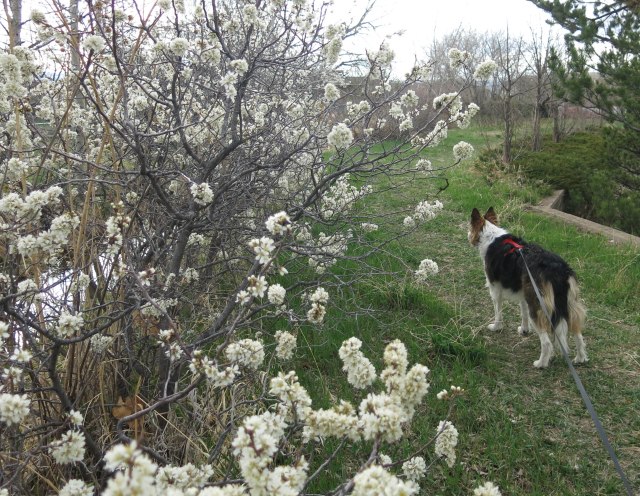 The sun hasn’t been out much, lately. It came out later today, and we could really smell the plums when we got close to them.

There’s a “weird tulip” flowering in the front yard. 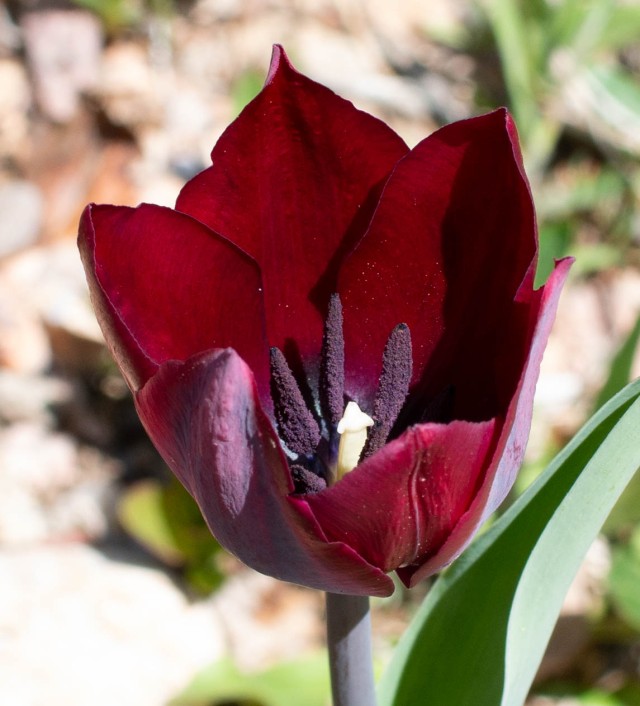 About twenty-five years ago a bunch of ‘Queen of the Night’ tulips were planted in the front yard (along with the orange ‘Dillenburg’ which everyone said to plant with it), and this is what had become of them.

Today an order of plants arrived, from Edelweiss Perennials. Mostly cyclamen. The guy I live with was very happy to get them. He likes cyclamen a lot, if you didn’t know. There were some other plants, too. 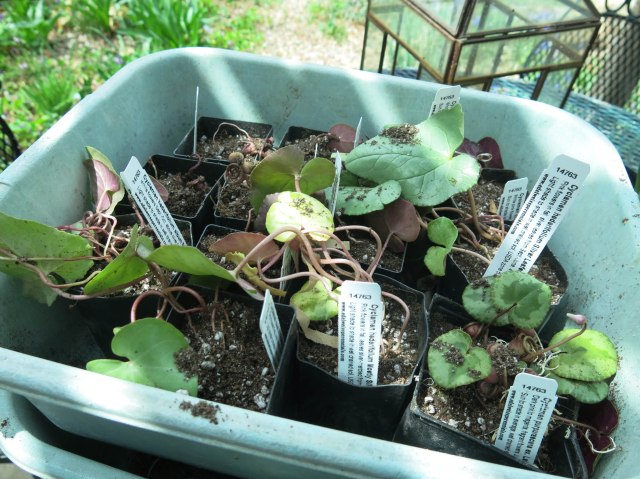 The box came right in the middle of a big project, so we took some time out to look at the plants and water them.

Remember this fence? Hideous, isn’t it? (Ignoring the equally-unattractive bamboo fence behind it, I mean.) This was the big project today. 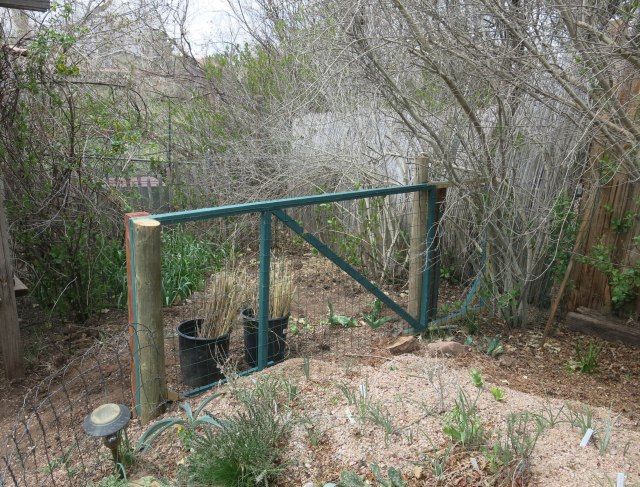 There was a lot of hemming and hawing about the fence after it was put up. Most of the materials were already here so it didn’t cost much money at all, but it was really, really ugly. It was necessary to have a little fence here to mark the end of the sand pile and sort of wall off the little corner in the northwestern part of the garden, but doing it with an ugly fence didn’t seem right.

Last weekend the guy I live with went to Denver Botanic Gardens and walked around the gardens with his friends, while it was snowing. He remembered the fences around the Bill Hosokawa Pavilion, a Japanese-style garden with bonsai in a greenhouse, and really handsome fences and paving, and this week he went and bought some lumber to make his version of the fences.

At first he had the idea that he would use cedar, and then when he looked at the various wood that was available there was oak, but all of these were sold by the linear foot, so he settled on pine. Much, much cheaper.

It might need to be stained later, so it hasn’t been thoroughly fastened to the uprights.

And you can see through it. 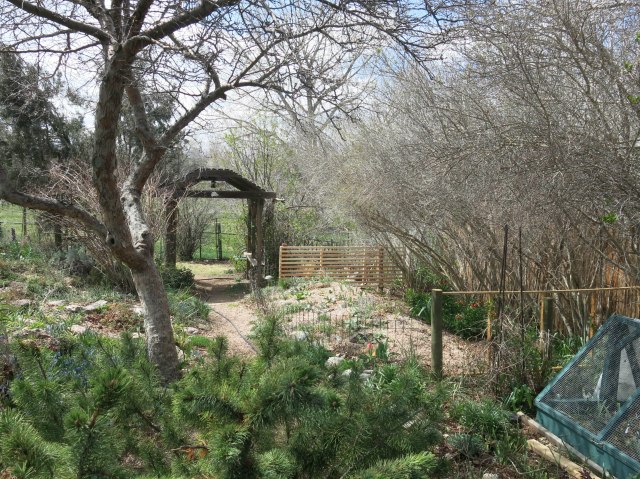 So we have a new fence. At least the other one wasn’t there for very long.

That’s all I have for now. Maybe things will get busier soon, but that all depends on the weather. I do know what to do when it gets chilly, though. 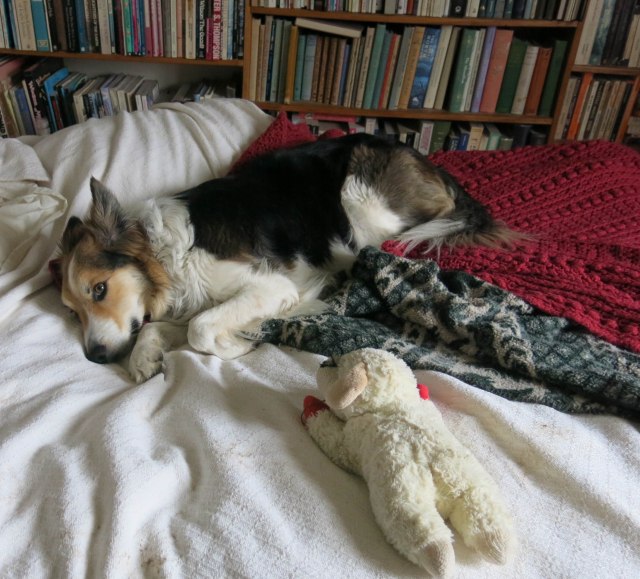