Greetings and salutations, everyone; yes, once again it is I, Mani the purebred border collie, your popular host, here to bring you the latest news from our very dry and crispy garden. You may remember me from such posts as “Mostly Roasting Again”, among so many, many others. 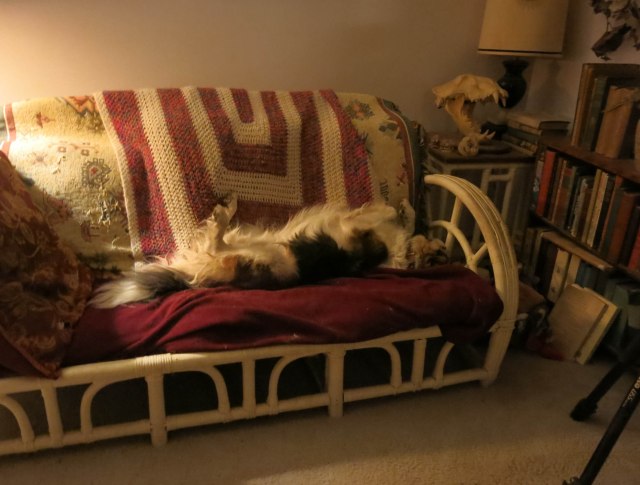 It had finally cooled off at night and I was taking it pretty easy, as you can see. We stay up until midnight every night. The guy I live with said that when Chess, the purebred border collie who lived here before me, got really old, he would stay up late so that the upstairs bedroom would be cooled off by the fan in the window, and Chess would be more comfortable. I certainly prefer going to bed in my upstairs fort when it’s cooler.

The guy I live with keeps talking about getting an air conditioner or maybe something called a “swamp cooler”, but the fans do a pretty good job. He said that people never used to have air conditioning back in the last century, but that now they do, though fresh air is always better.

Yesterday the forecast called for heavy rain. It was extremely dark here and the guy I live with got very hopeful, though really he wished the heavy rain would fall on the wildfire in southern Colorado. It rained for about two minutes.

Another thing that was pretty annoying were the firecrackers. There was a total ban on fireworks of any kind, but we heard a lot of them. The guy I live with said that people can be real jerks at times. I hate fireworks, and thunder, too. He said that all the purebred border collies who lived here felt the same way about both things, but that didn’t make me feel a whole lot better.

The thunder and fireworks made me so frightened that I went into my upstairs fort, but the guy I live with said it was too hot up there, because it wasn’t late at night when the room was cool, and he thought maybe I needed to have a fort downstairs in the basement. We’ve been taking afternoon naps in the basement because it’s so cool there.

So he thought about this for a little bit and got Chess’s old fort down from the rafters in the garage. It had been modified some to let Chess get in without much effort, but it needed to be cleaned. It sat on the patio for part of the day. Then he decided not to use it, and said he was going to throw it away.

I could tell by the way he was acting that this idea of throwing away Chess’s fort kind of disturbed him, and said the fort should go back up in the rafters.

He said that he could imagine what people would say about this, and give him all sorts of advice. People who had absolutely no idea what he was thinking, or feeling.

He then said that he was the one who got to talk about this, and make the decisions, and that if other people offered advice they needed to be quiet and just listen instead. It would be a first, for sure. (He even quoted La Rochefoucauld: “Nothing is so freely given as advice”.) The fort was purchased when Chess showed up here, in 2002, because he was trained to enjoy a fort, and he would sleep in it, and get very angry when Slipper, his older cousin, tried to go into the fort to sneak something out of it, like a toy.

And so the old fort could just sit up in the rafters, and every so often he’d just look up at it, and think of Chess in his fort, and then think of me all cozy and safe in my fort, like continuity of purebred border collies or something like that. I thought Chess sounded kind of spoiled with his specially-modified fort and soft Pottery Barn sheets to sleep on at night, though I do also sleep on the bed during the day, sometimes, and I guess some people would think that I’m even more spoiled because I have an upstairs fort as well as the kitchen fort, but I don’t sleep on the bed at night, so maybe that cancels things out. (I like my fort better, if you were wondering.)

So that was the news, as far as it related to me. I might have been able to post some pictures of the new ducklings paddling in the canal, but so far we haven’t gotten any. The grasses and stuff have really overgrown the canal banks this year and so it’s hard to see if there are ducklings there, but the guy I live with said he saw at least three a couple of days ago, with their mother, swimming down the canal.

I have some garden pictures, too. It hasn’t rained here in a very long time though every now and then a sprinkler is set, so things don’t look incredibly awful. Just very dry. 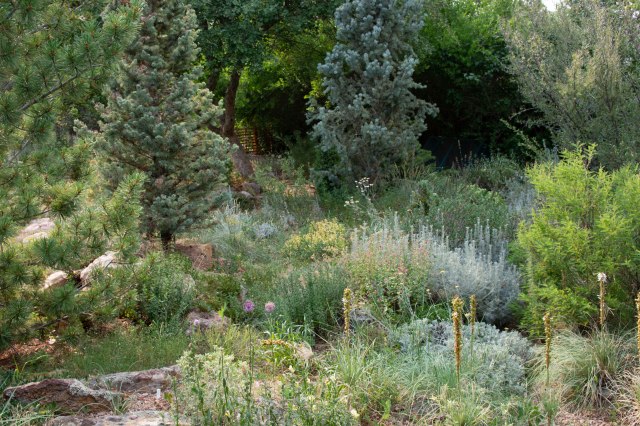 The guy I live with said he would like to grow more grasses, but finding ones which will tolerate the garden conditions is not easy at all. In this picture you can see Achnatherum calamagrostis, at the back (the big one flopped after the last hail and has a “corset”), and the native A. scribneri, on the right. It’s much less showy. And in front there’s a lot of bluebunch wheatgrass (Pseudoroegneria spicata), also native. I think this seed strain is from eastern Oregon or Washington, but the grass is native here, too. He really likes this grass.

Here’s a view of the bluebunch from a different angle. 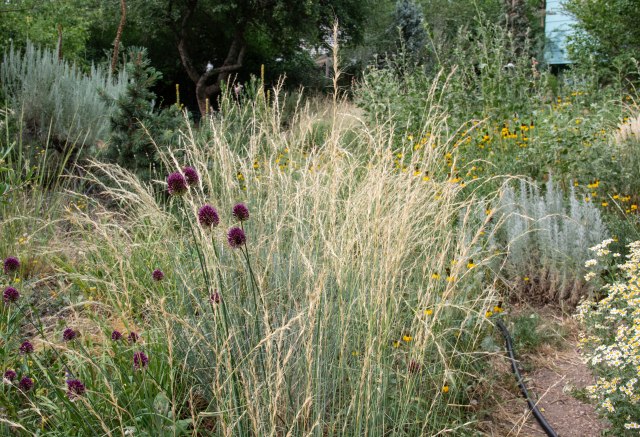 And of the seed heads. These are okay for me. 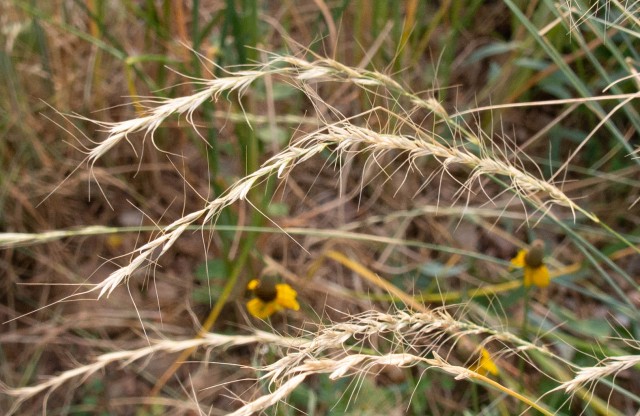 What I mean by “okay” is that the awns of some grasses can get into my coat, and work down into my skin. That sounds pretty creepy to me. The guy I live with said that Flurry, the first purebred border collie who lived here, had to go to the doctor after an awn got in his leg, so it’s important to know which grasses do that, and which don’t. In fact he even made a display of grasses, with their awns, and the scientific names of the grasses, which he took to the doctor’s office some years ago.

The only other things I have are pictures of our walk this evening. No one shot off firecrackers so it was a good walk. Most of the grass here is dry. Super crispy, even. I have this idea that firecrackers and dry grass don’t mix all that well.

This is the hill I walk around. Sometimes I walk over it. The guy I live with says it’s an artificial hill, which is think is just plain weird. It used to be a wooded area until it was “developed”, which in this case sounds like another word for ruined. 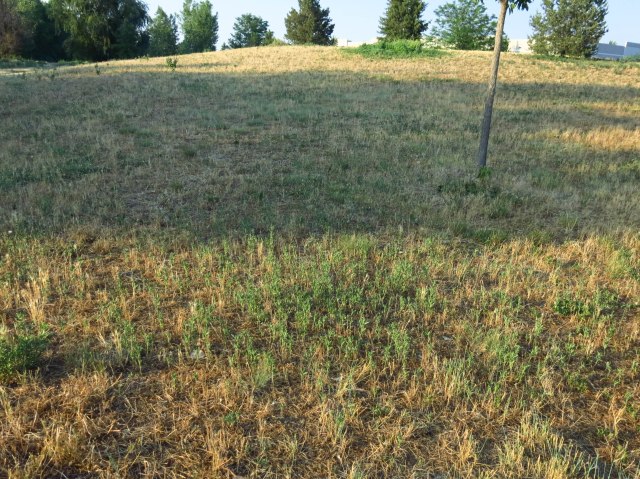 There was one prickly poppy in flower. The guy I live with has tried to grow these in the garden, but they never transplant well from nursery-potted plants. Maybe just sowing seed directly into the soil would be the thing to do.

I’ve mentioned red ants before, because there are several ant piles (I guess that’s what they’re called) right in the middle of where I walk. The guy I live with said not to stop right over them, because the ants might crawl on me. I really hate things crawling on me, and I suppose you might feel the same way. The ants also bite. They always seem so busy. I guess if you had someone standing over you while you had work to do you might feel like biting, too.

That really is all I have. Oh, except for the bats. There were bats over the field, and our back yard, this evening. Maybe you can see them here.

I know this has been a really wordy post but I think it was also interesting. I hope you agree. Here’s a picture of me walking in the dry grass in the field, past our garden. 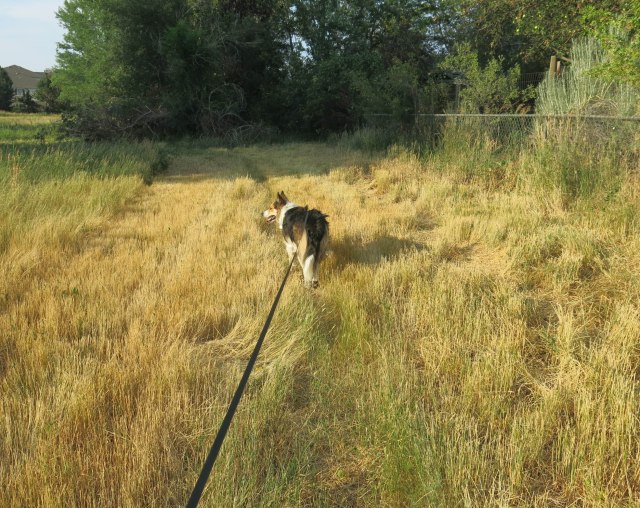