Posted on September 8, 2018 by paridevita

Greetings and salutations, everyone; yes, once again it is I, your popular host, Mani the purebred border collie, here to bring you up to date on our very modern lifestyle. You may remember me from such change-related posts as “Another Change”, among so many, many others.

Here I am in a characteristic pose. I really like lying on this rug, which may not be the cleanest rug in the world, though it does periodically get washed by rain and then sort of hung out to dry.

The garden doesn’t look too horrible so long as you don’t look too closely and see all the shredded leaves. There are lots of cow-pen daisies and Aster oblongifolius flowering right in front of where I’m standing and surveying. 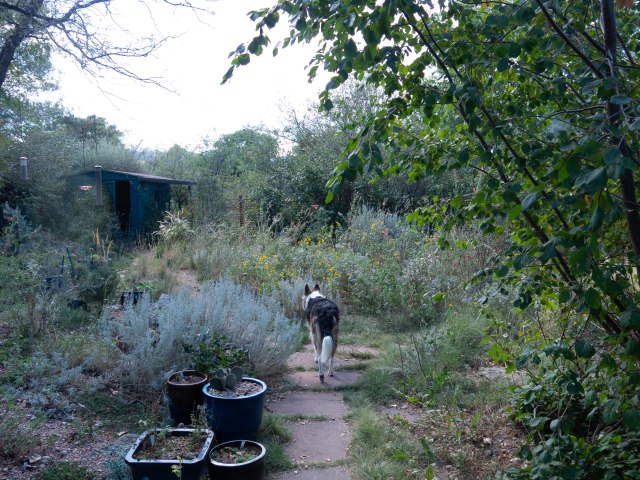 The view along the north path looks the same. The guy I live with keeps saying he’s going to get more gravel for the path but so far he hasn’t done it.

Out in the “way back” the cow-pen daisies (Verbesina encelioides) are flowering, too. They’re the only plants flowering there.

The really big change here is that the guy I live with’s mom died this week. He thought about this happening for a few years now, and figured he would be able to deal with it at least a little, since she was approaching ninety (this coming Halloween), but he’s been having a very hard time with this.

He brought home some watercolors and other paintings from his mom’s house. One of them was a watercolor done by his grandfather of the “way back” in his garden in Los Angeles. Looking west. (The windows next to the telephone pole are of the Dover Hotel, which is still there and looks the same. The apartment house in the background is still there, too.) It took him a long time to realize there was a “way back” in the garden here, too, bordered by a hedge, with a shed sort of at one end.

The other thing, which in its way is kind of big, is that there’s a new bed in the upstairs bedroom. Really just a mattress and foundation. It’s a lot higher than the ancient one that was there, and I was very surprised when I tried to get up on it the first time. Of course I can just leap up on it effortlessly, now, but he said when I get older he’ll put a cushion or something next to the bed so I can get up there.

It turns out that I can see more of what’s happening on the street now. And sleeping on a new mattress with a soft Pottery Barn mattress pad and sheet isn’t too bad at all.

Back to the garden for a minute, here’s Colchicum ‘Innocence’ flowering in the garden on the north side of the house. There are more plants on the other side of the garden, but the flowers aren’t up yet.

And Colchicum montanum, new from Odyssey Bulbs this year. It used to be called Merendera montana.

Some Cyclamen hederifolium and colchicums flowering in the little bed just off the patio, among the lamium and violets. The guy I live with says not to walk through there but I still do. There are snakes to hunt, under the birch on the left. 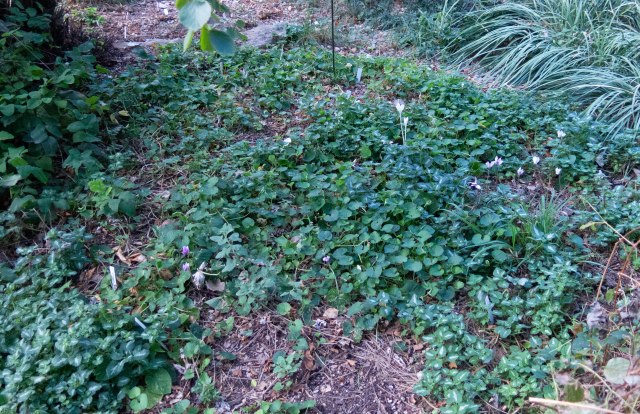 And a chrysanthemum, in the pot that had a tomato plant. He said “One does want a hint of color”. I didn’t get it.

I guess that’s all. We did a little bit of gardening today, and he said maybe we’ll do some more, when things settle down a bit. I’ll leave you with a picture of me walking along the canal road, which hasn’t been mowed at all this year. 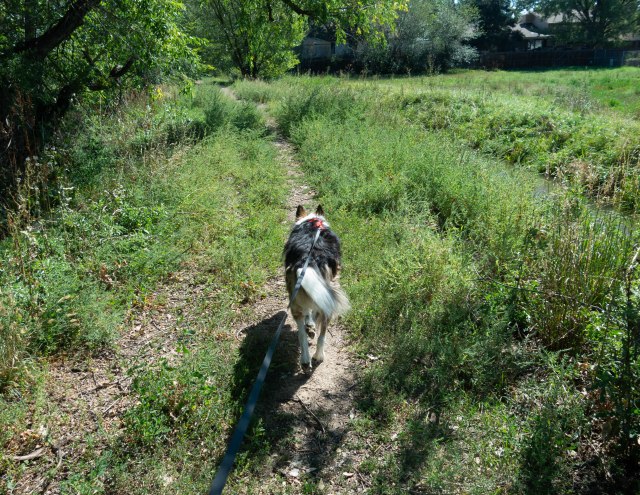 28 Responses to a big change