Posted on November 8, 2018 by paridevita

Greetings and salutations, everyone; yes, once again it is I, your popular host, Mani the purebred border collie, here to bring you the latest news about me, and about our garden. You may remember me from such posts as “The Bleak Season”, among so many, many others. 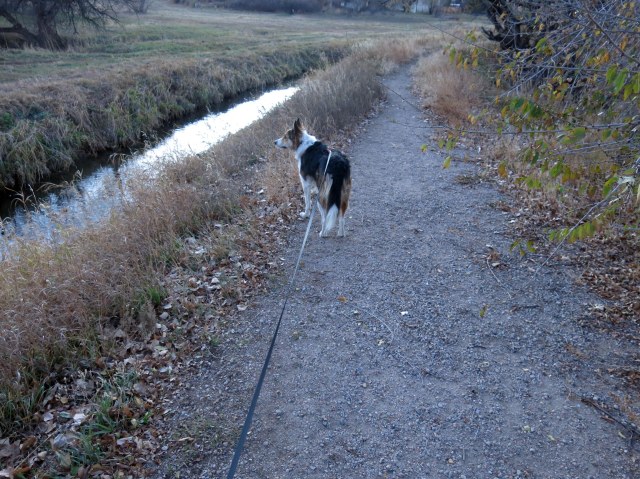 We were looking for the muskrat, just as the sun was setting. We’ve seen the muskrat, or maybe muskrats, almost every time we walk by here, and just as the guy I live with gets out his camera, we hear this “floomp” sound, which is kind of the sound a muskrat makes when it dives under the water.

The water in the canal is getting pretty low now. I suppose it will be shut off any day now.

We’ve seen a lot of hawks lately. There was one in the tree a couple of days ago.

One just today. Maybe the same one.

I scared one. I can be deadly and terrifying, as you know.

That blue that you see in the background of those pictures is the sky. We’ve hardly seen it at all for months, now, and so I thought I would mention it.

There was even a bit of a sunset the other night. November is the month for spectacular sunsets here, but only if you can see the sky.

For the last couple of days it’s been cold and gray, though the sun did come out some, today. It was also freezing today. Right at or a little above freezing, I mean. I didn’t mind it, but the guy I live with had to put on a coat when he went outside. He’s a lot less tough than I am.

Not much else has been happening around here. The guy I live with brought home an old  walking-stick, probably made in the Philippines, from his mom’s house which he had never seen before. It’s not in focus, but you can get the idea.

He got a smart phone because he said it was time to. Some of the pictures here were taken with it. Like this one, when there was sky in the background.

And like this picture of Cyclamen mirabile ‘Tile Barn Nicholas’.

Speaking of cyclamen, a shipment of them came the other day. These pictures were taken after the cyclamen were repotted and watered. 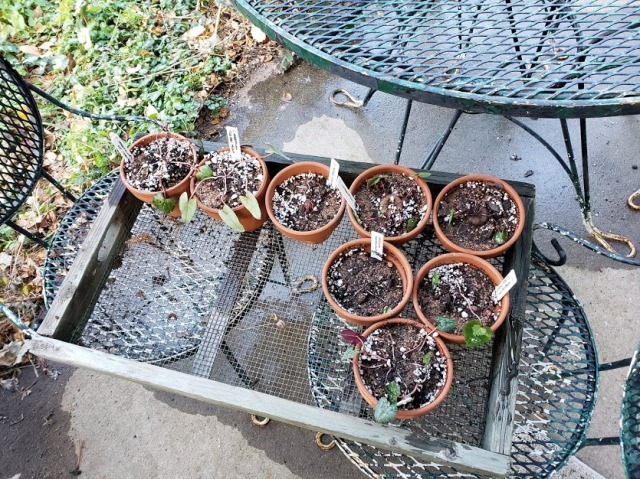 They’re going into the upstairs bedroom because it’s really too late to plant them out in the garden here, even though all the tubers had very nice roots. The roots won’t have time to grow into the soil before it gets cold here, which it does, and so the cyclamen will be perfectly content upstairs. They’ll be planted out in the garden next year.

Then, with the new phone, he took some pictures of things he felt like taking pictures of. Partly old things, partly things that were old, but new to the house.

One of the water buffalo bookends. It’s pretty dusty. It’s been here for ages.

And the ashtray. Also very dusty. Like all the other stuff, it was his grandfather’s.

One of his grandfather’s watercolors. There was a set of these at his mom’s house, and now they’re here. 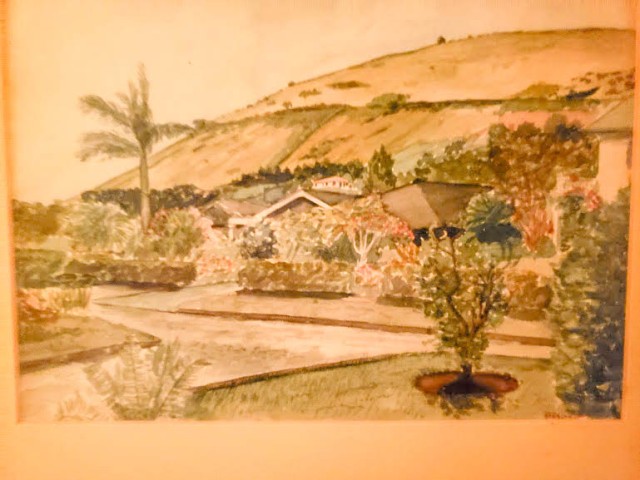 The little picture his wife framed and attached to the kitchen door, going into the garage.

I know I talked about books being rearranged in the living room a while back, and since the guy I live with has this new phone–I mean his old phone could take pictures, too, but you needed a magnifying glass to see them–he took some pictures of the bookshelves in the living room just to prove there had been some rearranging. Instead of just talk of rearranging.

Though some books from upstairs were put in these bookshelves, this wall, below, has looked the same way for the last fifteen years or so. The guy I live with didn’t have anything to do with the way this wall in the living room looks.

I’ll leave you with what I’m pretty sure is the best phone picture of all. Me after a day at Day Care.

18 Responses to on the phone