Greetings and salutations, everyone; yes, once again it is I, your popular host, Mani the purebred border collie, here again for another fascinating post. You may remember me from such posts as “Beyond Super Roasting”, among so many, many others.

Here I am in a characteristic pose. The carpet is strewn with pieces of pine cone. I like to chew on pine cones, but you knew that already. 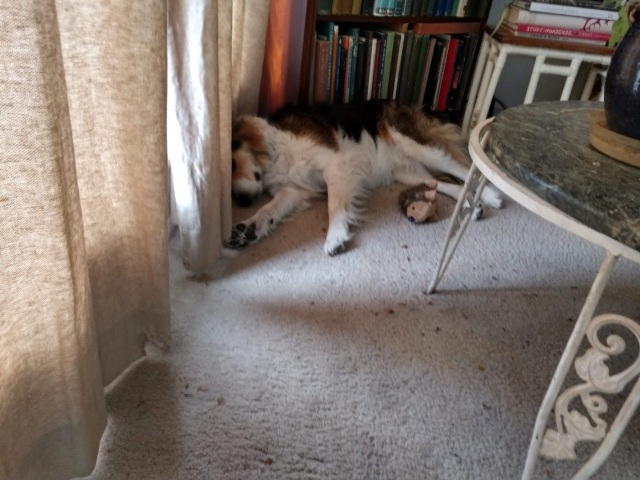 It’s raining right now, and I mean really raining, but today was so hot even the guy I live with complained some. 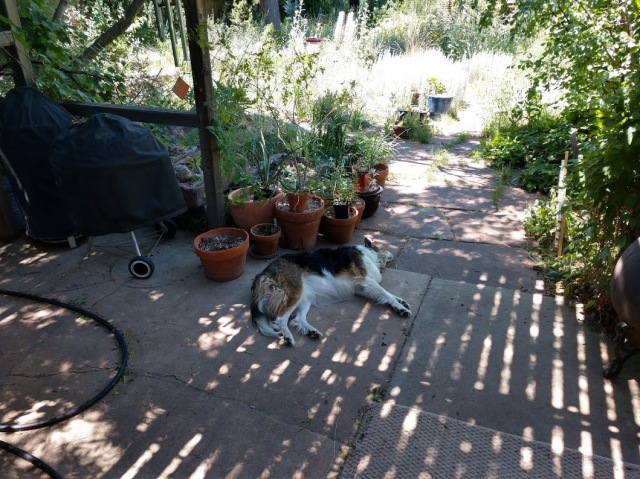 The guy I live with got some cactus in the mail yesterday. Mostly chollas, he said. There were some he wanted. These will be grown well away from yours truly, I hasten to add.
This one looked scary even before he opened the bag.

It was a form of Cylindropuntia davisii. Like, ultra scary. 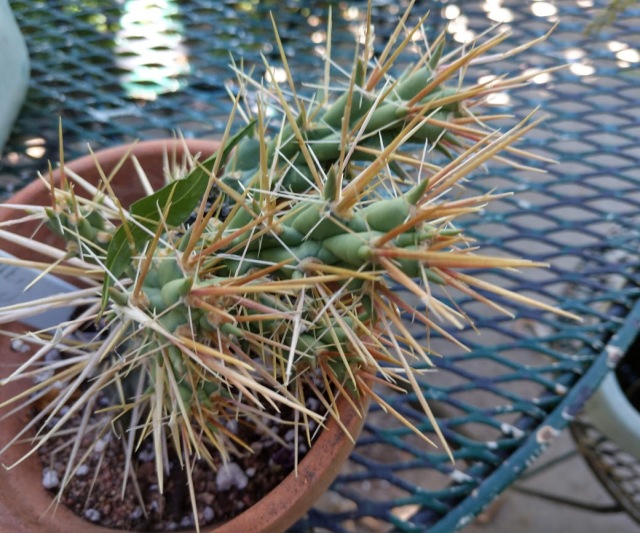 After it’s rooted it will live in a pot in the front yard. It takes a few weeks for the joints to root, once the ends have callused. The ends were already callused when they came in the mail. 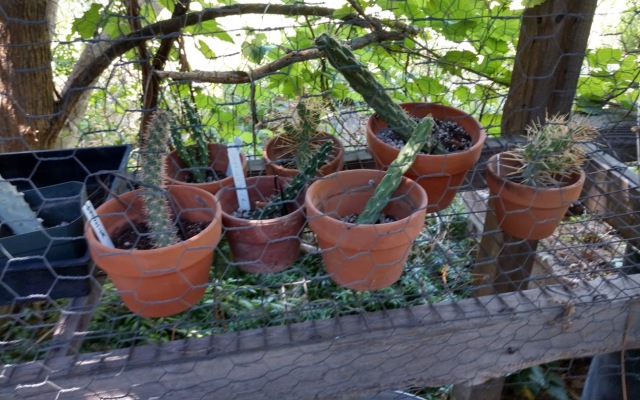 The other day, the guy I live with left me at home to go see his friend. They went to lunch, and to a couple of small nurseries near where she lives. They’re both very nice nurseries; they had a good time, despite the fact that it was hot and he was having hot flashes.

This is Southwest Gardens: 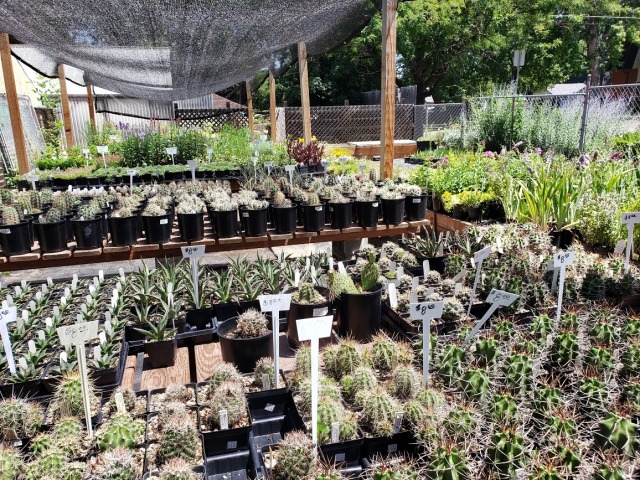 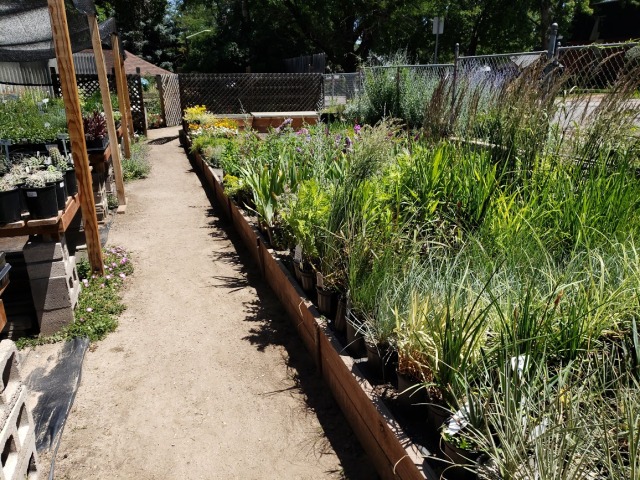 The guy I live with is just as happy going to nurseries with his friend as he was with his wife. And just as comfortable sitting in her living room as he is here (though there’s a cat at her house, ick) Like other people, he’s had a lot of shocks in his life, but this was one of the biggest.
Obviously they don’t live together, and that’s probably the secret of success. The big deal, and I think this is a super big deal, is that they can share “life events” together. The guy I live with has had kind of a lot of those life events lately, and she was there for him on the occasions when he was told he couldn’t drive to the urology center.

This is Young’s nursery: 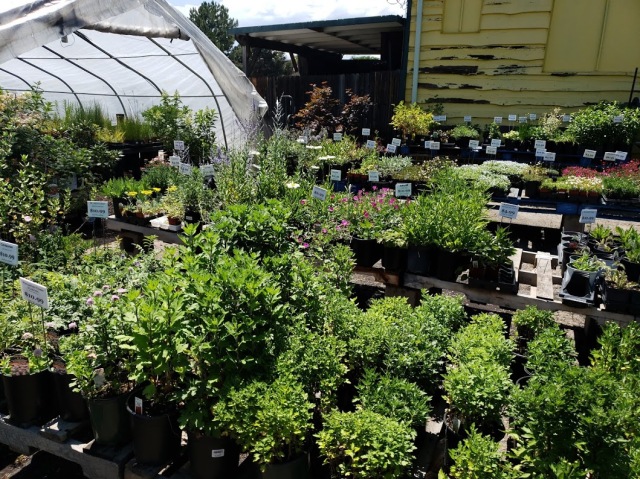 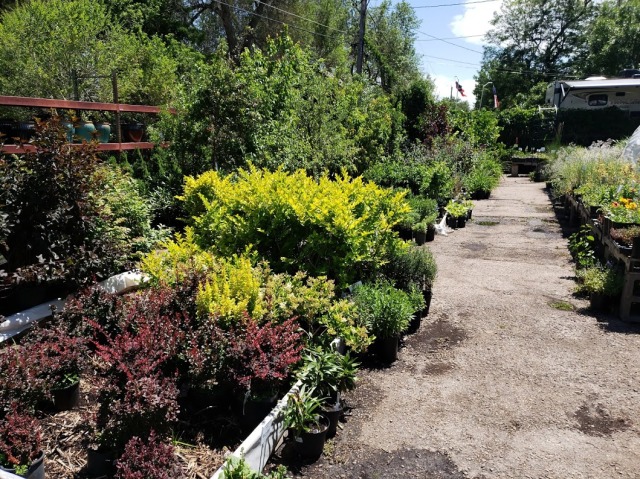 That’s a ‘Forest Pansy’ redbud, with the purple leaves. The guy I live with told his friend they should get it for her garden, so maybe they will, later. Her garden is way different from his and he wants to plant stuff like rhododendrons in her garden. There were some here at one time but he gave them away, because visitors spent most of the time looking at them instead of the rest of the garden.

I know I still haven’t told the story of how the guy I live with and his friend met, but I will, pretty soon.

The guy I live with is happy he got the cactus, and the plants at the nurseries, because he said he wasn’t going to buy any plants this year, and after a while he began to feel all weird about that decision. It wasn’t like buying snowdrops, money-wise, for sure. (I’m not supposed to talk about that, I think.)

One kind of sad thing: he said his mind keeps starting this thought that his mom might give him some money on his birthday, because she always did. Instead of sweaters that were too small. She didn’t last year, but she was going downhill and the guy I live with understood.  He also keeps thinking he should call her, and misses hearing her voice on the phone, even though sometimes the conversations were peculiar. He was already used to someone constantly in his life suddenly not being there, but that didn’t make it any better. His birthday is this Monday; he’ll be sixty-eight. I’m not sure how old that is in dog years.

So, back to today. It was hot. The guy I live with worked out in the garden even though he was perspiring and there were times when I thought he might pass out, but he was also drinking a lot of water and all sticky from sunscreen. It was a good thing we didn’t have a dust storm; he would have been covered.

Then he started looking for something in the garage, which he never found. He told me that was a metaphor. I’m not so into them as he is. Metaphors, I mean.
But he did come across this: 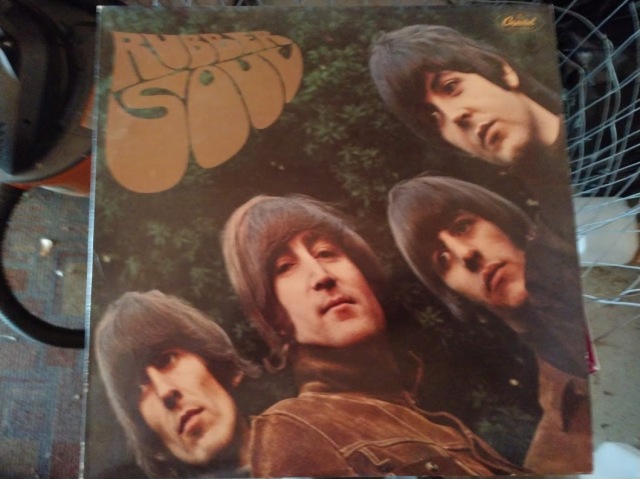 This is called an album, and it has a record in it.Some people call it an LP, because when they were first introduced, in the late forties, they played longer than 78s, which were the records before that, and which rotated at 78 r.p.m, on something called a “turntable”, so people called them “long-playing records”. or LPs. They rotated at 33 1/3 r.p.m. Slower, so a longer playing time. And they didn’t break if you dropped them.
The guy I live with looked at it, and then said something I can’t repeat. This record is over fifty years old and the guy I live with just realized the title was a pun: rubber sole. Like what’s on the bottom of his shoes. (Though not really, these days.)

Well, that was agonizing.

After all the hot gardening, a lot of which never actually got done because he spent so much time in the kitchen just sitting here, he watched an online tutorial about cameras and decided to try to take some pictures using aperture priority. These pictures, then, were taken with the DSLR. They are way more in focus than they appear here, for some reason. 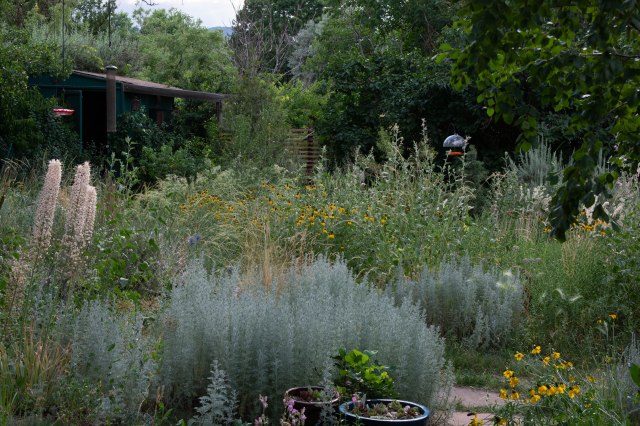 And all of a sudden we had a visitor. Of course the camera was set up wrong.

But this one wasn’t bad, for a set-up-wrong camera: 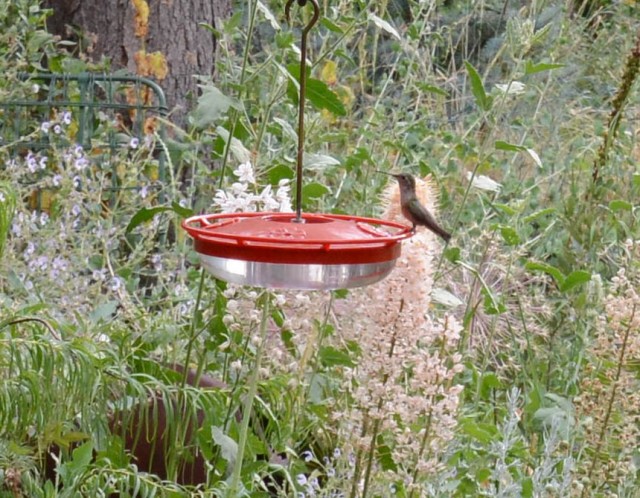 Well that really is it for today. It was super hot, then it rained and got all cool, but also thundery. I guess you have to take the bad with the good. I learn a lot of platitudes from you-know-who.