Greetings and salutations, everyone; yes, once again it is I, your popular host, Mani the purebred border collie, here today to talk about this and that. You may remember me from such posts as “Another New Toy”, among so many, many others.

Nothing much has happened for days, until today, when things started happening. You know how like you get into a routine, which may be boring, or fascinating, or something in between that, but you get comfortable with it, well, that’s how things have been, but today all of that changed, because of the weather.
Instead of describing it, I’ll show it to you:

The first thing this morning, there was very strong perfume (probably what some people call “home fragrance”, though the guy I live with calls it something else entirely) in the back yard, and I worried that he was going to lose consciousness because he was coughing and choking so much from it, but then it got windy. It didn’t blow all the perfume away, though. The guy I live with said the perfume was stronger than wind, if not something extraterrestrial, but eventually it got super windy. Scary, even. The wind was gusting as high as about fifty miles per hour (80 kph). And it was windy for most of the day.
That was pretty different. Mostly it’s been dead calm here day after day.

You can see that leaves were blown everywhere. 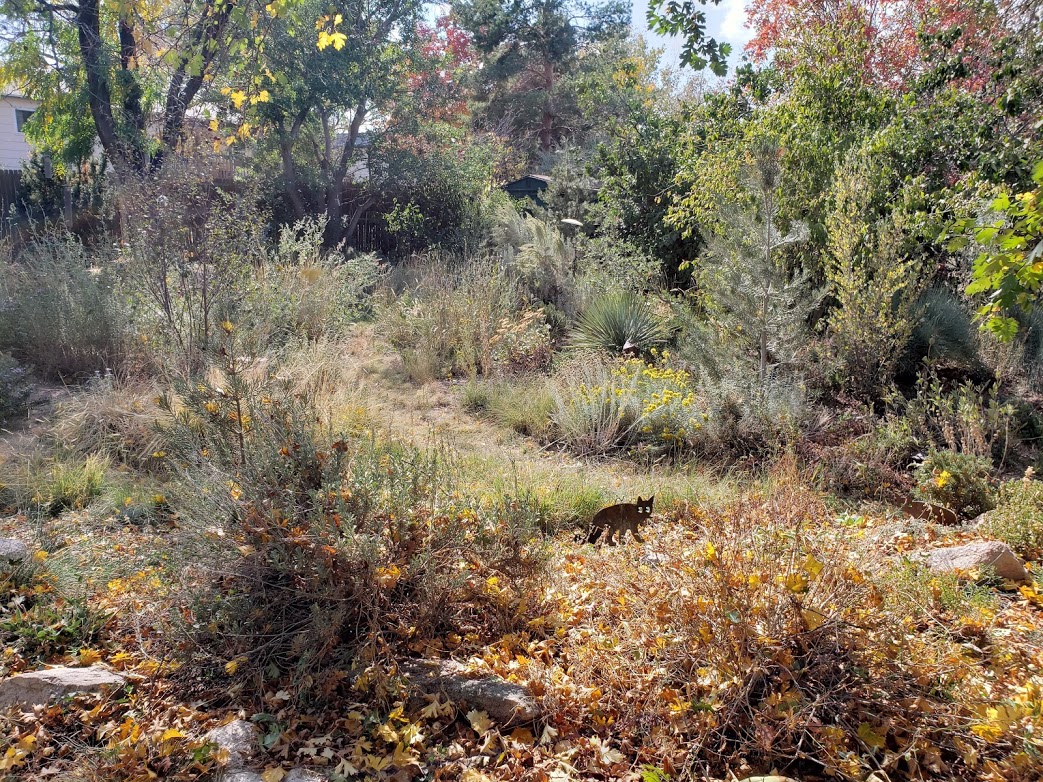 There was one slight interruption to our daily routine, when the guy I live with went to the arboretum with his friend. They hadn’t seen each other for quite some time.
He took some pictures that turned out to be huge files, so I didn’t upload them, but also these phone pictures.
This is Monardella macrantha ‘Marian Sampson’. 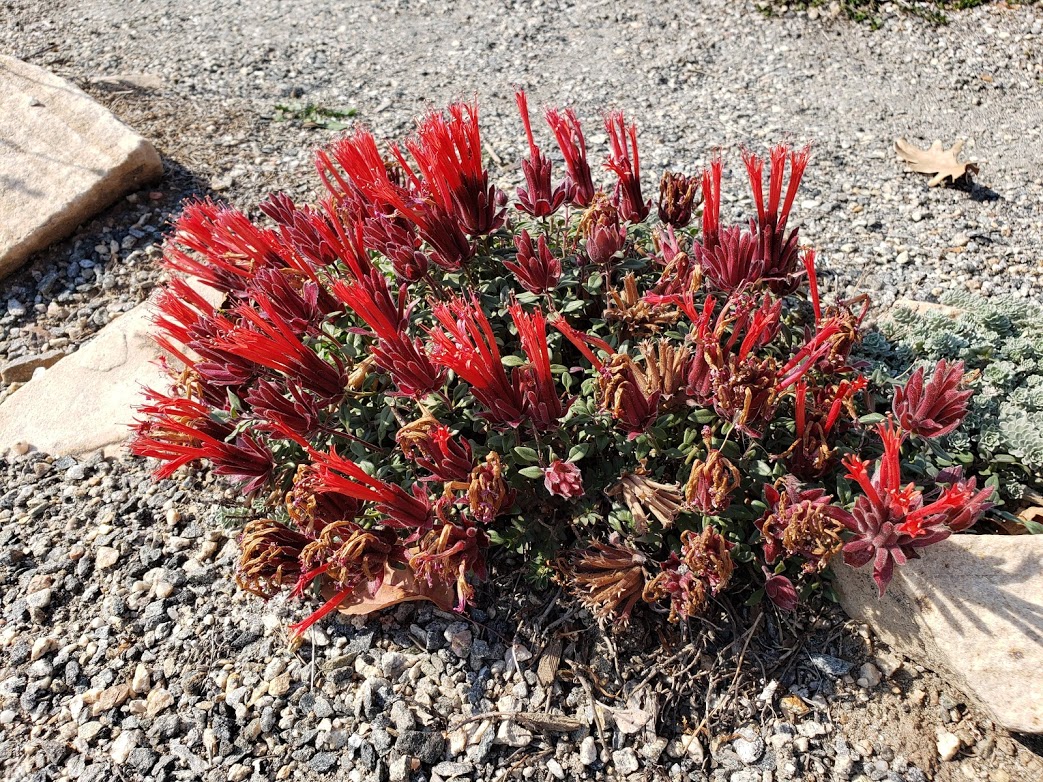 There’s one in the garden here, but it really needs too much water to fit in with everything else.

And then Vernonia larseniae, which the guy I live with has tried to get going here a number of times without success.

The guy I live with said he was advanced enough that he can enjoy plants in other gardens rather than being desperately jealous. I’m not sure that’s entirely true.
He and his friend went to the store after that, then they came back here and I got to say Hi to her; I hadn’t seen her in months but I remembered her just the same.

We all went out into the back yard to look at the hideously butchered trees next door, which we’ll have to look at for a long time, “Unless they fall over”, the guy I live with said. A landscape company did this. Imagine twenty-foot tall sticks, with a few leaves at the top.

He explained that gardeners can be ultra-sensitive to ugly “landscaping”, particularly if it’s right next door, and especially to atrocious tree pruning, since it’s extremely visible.

There are cyclamen in flower here. This is Cyclamen cilicium.

There are some crocuses flowering here, too, but the birds are tearing the flowers to shreds within hours after the flowers open, so there aren’t many pictures. The guy I live with says it’s so dry here that creatures who don’t live in the house, like the two of us do, have to fend for themselves when it comes to food.
I’m glad I don’t have to do that. I know I’m very lucky.

So anyway, that’s what’s been happening. Not really very much at all, except for the wind today.
I’ll leave you with a picture of me being very contented and cozy; the way things should be  for everyone. 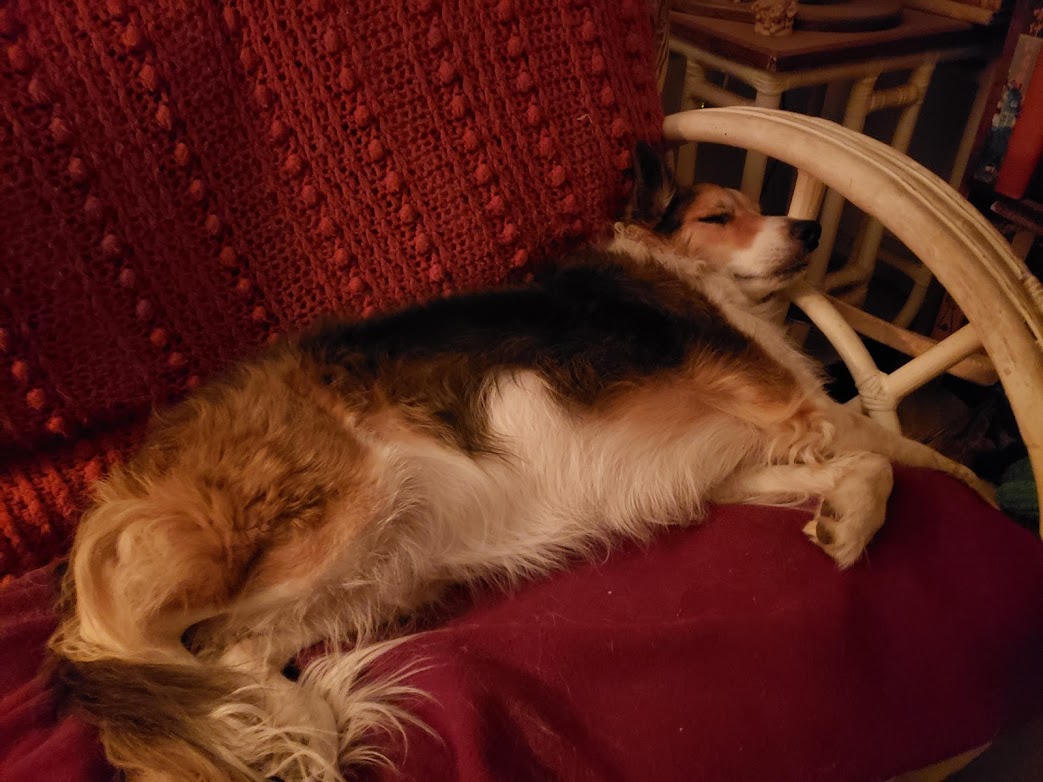 38 Responses to smoke and wind