Greetings and salutations, everyone; yes, once again it is I, your popular host, Mani the purebred border collie, here, on this chilly day, to bring you up to date on all the latest happenings here. You may remember me from such posts as “Horticultural Invective”, among so many, many others. 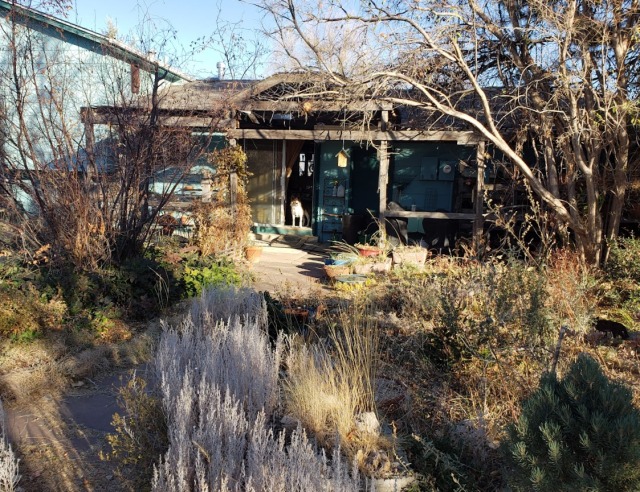 It was chilly today; freezing, actually. They said it might rain last night, or even snow, but I think you can tell that neither of those things happened. So we’ve gone 110 days without rain.

Mostly all we did today was make a quick survey of the garden.
There were still some crocuses flowering. 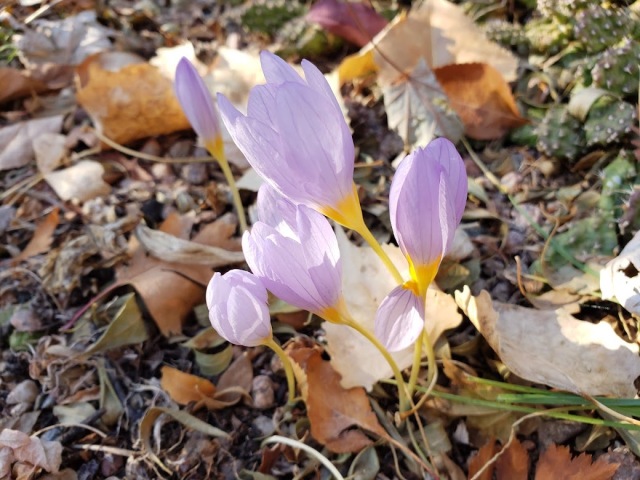 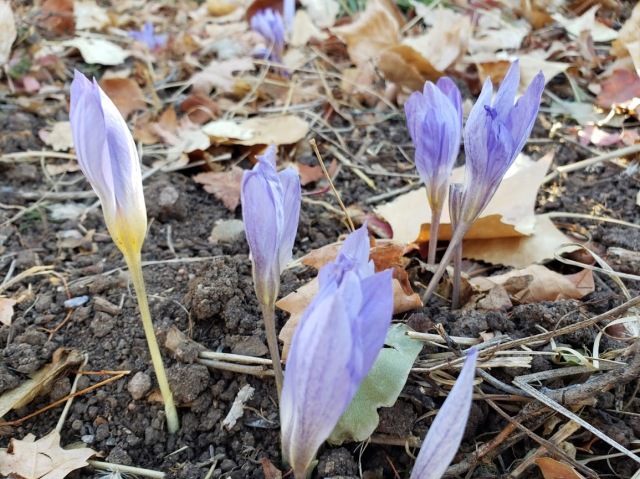 The ones in the last picture look kind of frazzled, and maybe they might be, but some years we still see one or two in the middle of December.
Here I am, returning from the survey. 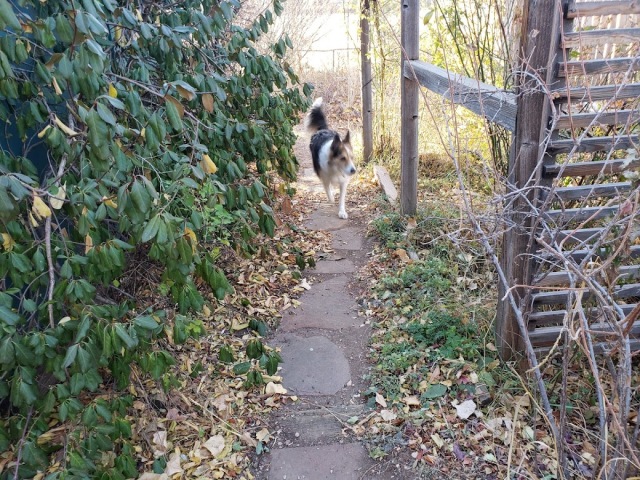 I had to make sure there were no squirrels stealing sunflower seeds from the feeder, which is supposed to be for the chickadees.
You can see the feeder here. I guess the hose can be put away for the winter. 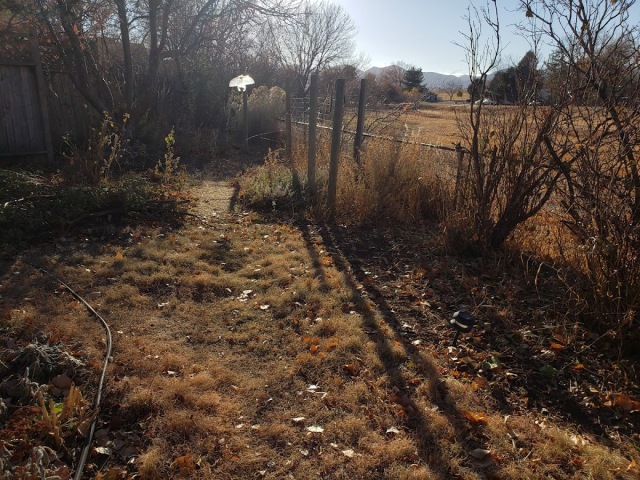 You can also see it from here, and also how we can now see the “way back” from the main garden. The guy I live with said when the lilacs are removed, he might put up a fence there, like the one in the left of the picture. 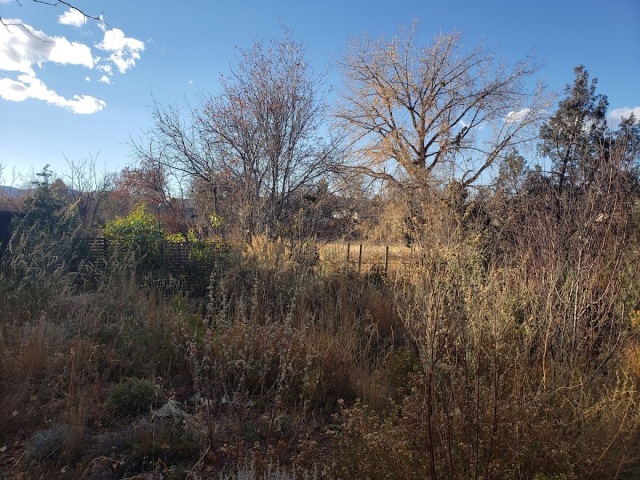 Maybe the main thing that’s gone on here is seed sowing. The guy I live with got a bunch of seeds this year. Some were sown directly into the garden, on the days when rain was predicted that night or the next day (and nothing happened), but he decided to do the rest in the usual way, by sowing them in pots, and putting the pots into the frames. 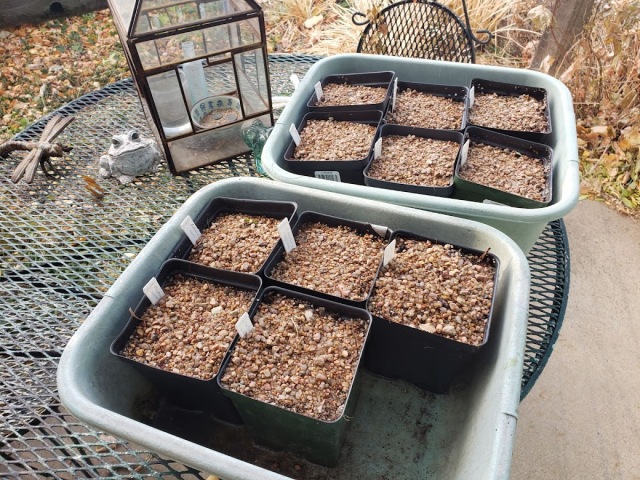 These are all native plants. Dryland plants. The guy I live with likes other plants, of course, but getting the seeds requires more effort than it used to.
And if it’s going to be this dry, maybe these plants are a better choice.
Of course it needs to snow for any action to take place; the snow will keep the seeds from drying out, and cool temperatures will cause the germination inhibitors in the seeds to degrade, so that, eventually, the seeds will be ready to germinate. Warm weather in spring will take care of the rest.

The gravel on top of the pots, if you didn’t know, is called “squeegee”, for reasons I don’t know. I know I’ve mentioned this before. It’s becoming harder to find. There used to be a couple of nurseries that sold it in big bags.
It prevents the seeds from drying out.

The dishpans are important too. “A valuable addition to our modern lifestyle.” The dishpans have been here for about thirty years; they sit out on the patio. That was the only color he could find, at the time.

Anyway, since it’s been cooler, some other things have changed. I wanted to go look at the cottonwood, and so we did.
You can see its huge roots, growing into the creek bank. 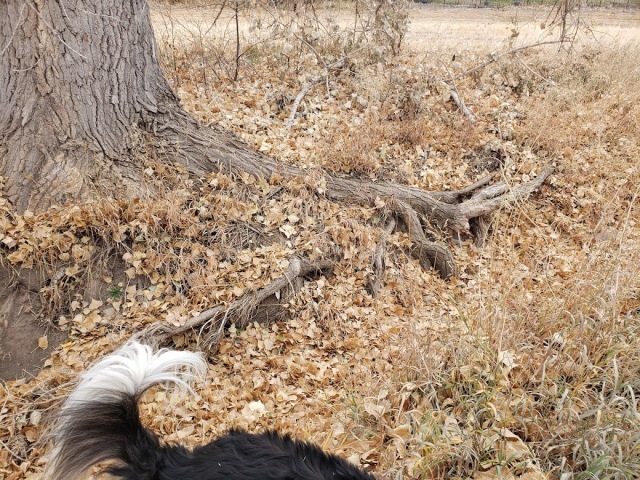 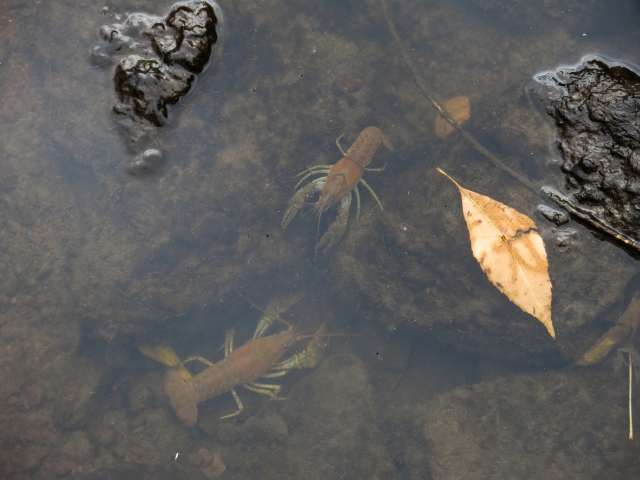 The guy I live with said he thinks the crawdads burrow into the banks of the canal and go dormant in the in winter. We saw these two days ago. But today we didn’t see any at all in the water.
When Chess, the purebred border collie who lived here before me, went on walks by the canal, he used to scare great blue herons fishing in the canal; maybe they returned for a crawdad snack, but the guy I live with said the crawdads probably went into their winter homes. They probably don’t have TV or Wi-Fi.

So that’s it for today. 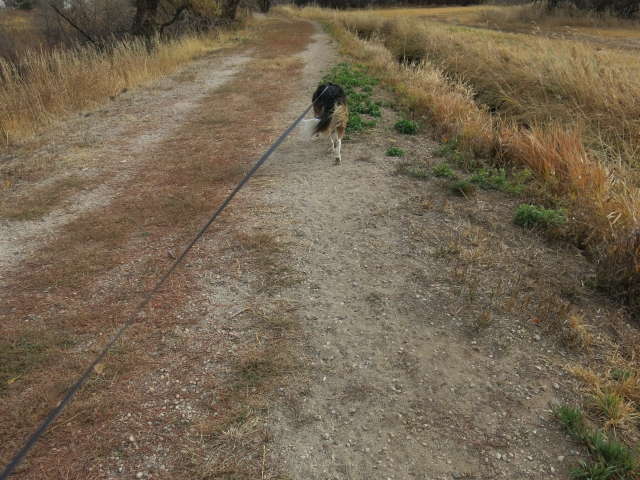