the big turn off

Greetings and salutations, everyone; yes, once again it is I, your popular host, Mani the purebred border collie, here today to bring you up to date on some things around our house and garden. You may remember me from such posts as “The Haunted Toaster”, among so many, many others.

I was looking at something. Probably a squirrel.
That’s Dasylirion berlandieri in the pot, if you wanted to know. It will have to come inside if it ever gets cold.

I might as well get right to the title of today’s post. I think this is an object lesson for everyone.
A few weeks ago, maybe even more weeks ago than that, the faucet started dripping.

Now if you know your faucets, you will know that this is by no means an inexpensive faucet. It’s a commercial one, with handles that can be turned on and off using wrists, if necessary. The guy I live with says it’s part of the batterie de cuisine here.
At first it was just dripping a little. Then suddenly it started dripping a bit faster.
The guy I live with put a gallon plastic milk jug under the faucet, with a big funnel stuck in it to catch the dripping water. He thought that was pretty genius-y.
I wondered if the faucet was ever going to get fixed, because I could hear the dripping at night. Drip. Drip. Drip. Drip. Drip. Like that.

He explained that yes he knew how to fix the faucet. You unscrew the faucet handle, then spend a bit of time trying to get the handle off, then you remove the handle hub (the thing right below the handle), and pull out the cartridge.
He even had a replacement cartridge. More than one, actually. 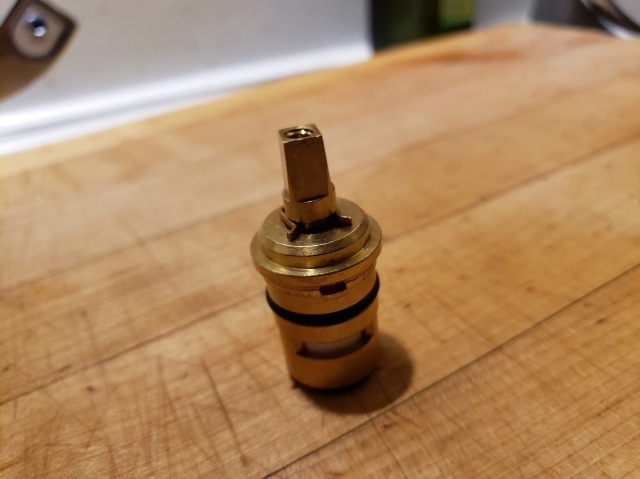 There are “hot” and “cold” cartridges. The one pictured above is a “cold”.

He held his arm under the dripping water, wrist upward, and said it was cold water.
But then he did some additional thinking, which he said was always a good idea, and ordered new handle hub kits, because the last time he replaced the cartridge he had a very difficult time replacing the handle hub.

But he still put this off. He’s not really the sort of person to do that, because he hates having things weighing on his mind like that, but what if the turn off valves under the sink didn’t work, or started to leak, and what if a plumber had to be called, or what if he had to go into the crawlspace to shut off the water and what if the yellowjackets in the crawlspace weren’t really gone but just waiting for him to crawl over to the main shutoff valve?

Well, last week he reached under the sink to test the shutoff valve for the cold water pipe, and everything was fine.
So yesterday, he shut off the cold water, spent about half an hour removing the faucet handle and hub, pulling out the cartridge, which of course didn’t just come out when he pulled on it with a pair of heavy-duty pliers, replaced the cold water cartridge, put everything back the way it was, and turned on the cold water.

You may be able to imagine what sort of language I heard.

Then he explained that the water coming from the hot side was only hot when it was coming from the hot water heater. It cools off just sitting in the pipe.
Fortunately he also had a hot water cartridge, and also fortunately, the shutoff below the sink worked (he installed it years ago). There were a lot of deposits on everything because we have what they call “hard” water. Having a wire brush helped.

So everything is fine. For now.

Aside from that (whew, huh), let’s talk about some things more related to actual gardening, or at least the outdoors.

The goldfinches are back.

The guy I live with moved one of the steel feeder stands and put up the other “thistle” feeder, and so now the goldfinches have two feeder choices.
You can see them here, on the other feeder.

All those dry warm-season grasses, which are mostly native ones, are kind of echoed by the yellow grass in the field, which isn’t native, and is a cool-season grass, but hasn’t had any water for months, so it looks like that.

This is what the soil in the “way back” garden looks like. Bone-dry. 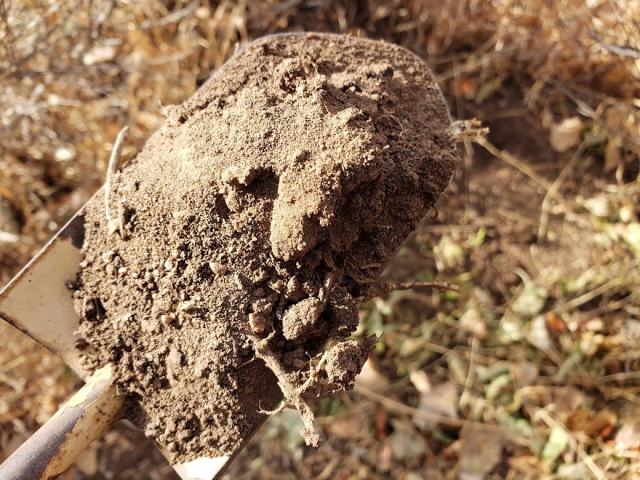 Lilium candidum looks pretty good right now. There are only two bulbs left; the guy I live with isn’t really certain what happened to the others, but I’d bet he sliced through them with a trowel, because he does that all the time.

He went into the shade garden just to check on things, and when he moved some of the leaves, this is what he saw.

Lots of snowdrops. There are zillions of them in this little garden. The soil here isn’t dry. Mostly Galanthus elwesii ‘Theresa Stone’ and offspring (crossed with regular G. elwesii), but also some G. plicatus, G. rizehensis, G. nivalis, and G. gracilis. A lot. You can see them in the header for the blog.

Well, that’s all I have for today. I thought the faucet story was pretty funny, but that’s because, as the guy I live with said, I didn’t have to do the work.
I’ll leave you with a picture of me wearing my fancy new lighted collar. The guy I live with got it for me so that people would be able to see me at night, on my walks. Or maybe he just got it because he thought it might be cool. 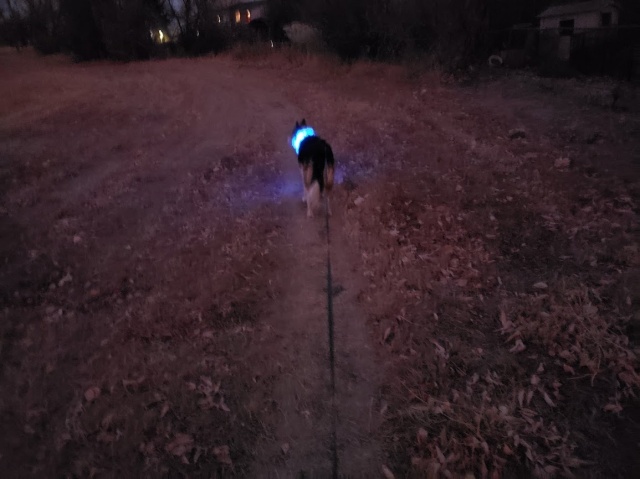 22 Responses to the big turn off