Greetings and salutations, everyone; yes, once again it is I, your popular host, Mani the purebred border collie, here today to talk about the irises, and some other things. You may remember me from such posts as “A Bit Of Work”, among so many, many others.

Here I am in a characteristic pose. (Whether my mouth be open or shut.)

I think you can see how terribly dry it is here.

You may also wonder why there’s another post so soon after Christmas. Partly, I guess, because one of us can’t stop talking, but mostly because the guy I live with decided to hasten hurriedly on, and talk about other things.
We didn’t do anything for Christmas. There weren’t any decorations. The guy I live with thought about this a lot in December, and decided to ignore people who said he should “at least do something”, because, the way he saw it, trying to recapture that lost magic would result in just more unhappiness.
So it was just the two of us, going on walks, and taking afternoon naps. We had a good time together.

He did go down into the studio for a while, where he says there’s still some of that magic, but then he came back upstairs. 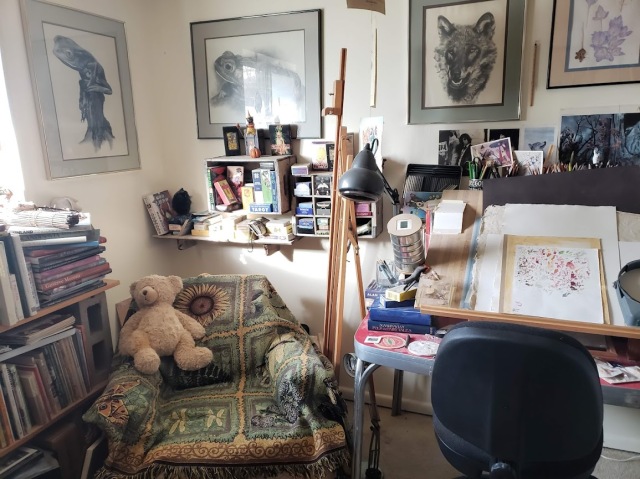 More work was done on the enclosure fence, and this is what it looks like now.

I think all the posts will have to be reset in the ground. It will be interesting to watch all of this.

It rained here the other day. Not a whole lot, about 0.02 inches, but better than nothing, except for the fact that it never rains here in the winter, so this was “totally weird”, according to the guy I live with. He said it was good, regardless.

There’s a snowdrop in flower here. One called ‘Barnes’. This was planted some years ago but the guy I live with found the bulb lying on top of the ground this summer, and it was replanted.

Kind of pathetic, I know.
There are a lot of snowdrops up in the shade garden.

There was an early-flowering one there, called ‘Potter’s Prelude’, but the flowers were all shriveled when he went to look at it today. Maybe picked apart by birds.
The guy I live with said he was going to move all the early-flowering ones to a place where they would get more water, so there’s another project for next year. There are a lot of them to be moved.

Since he had the camera, he decided to take a picture of this little oak.

It was grown from acorns collected in Palo Duro Canyon in Texas, and has grown maybe three leaves since it was planted about ten years ago.

The birds didn’t get the fruit on Mahonia fremontii (the one growing in the back yard), and so it looks sort of seasonal now.

And so now to the subject at hand. The irises. They arrived in the mail very late this year, which would have been distressing to the guy I live with except for the fact that he actually had a plan. That surprised me, because usually things like this involve a lot of frantic thinking and then rethinking and then re-rethinking, and the plants almost always die because of that.
You see (I know no one says “you see”, any more, but I thought I would say it), these are forms of Iris stolonifera (as well as a couple of rhizomes of Iris lineata). I talked about them a few posts ago.
Like I said in that post, these irises need to grow leaves in autumn. You can see that another species in Subgenus Regelia, Iris korolkowii, out in the garden, has leaves.

The guy I live with gave most of this iris to Denver Botanic Gardens, and kept just a small rhizome for the garden here.

The new rhizomes were potted up, and set under lights upstairs, but the guy I live with noticed fungus growing on top of the soil-less mix, and wondered why on earth he had used that mix (I can’t print what he really said), and so repotted all the irises in a mix that’s mostly gravel, sand, and scoria, so there’s plenty of oxygen for the roots. The mix never stays soggy.
After quite a bit of careful watering, every single rhizome has now produced leaves. There was one, ‘Caligula’ (the Iris stolonifera are collections from near a village called Sina in Uzbekistan, and named for Roman emperors), third pot back in the left row, that wasn’t doing anything, but it produced a leaf a couple of nights ago. There were no leaves during the day, and then the next morning there was a leaf. Just like that.

I guess there was a brief March of Triumph, with maybe some singing, upstairs.
The irises can sit up in the bedroom all winter and spring, and then they’ll go dormant, and be planted out late next summer.

Well, so, anyway, that’s what I have for today. I hurt my carpal pad and have been busy washing it, the way we dogs do. The guy I live with inspected it and said it would be okay.
I’ll leave you with a picture of me eating a biscuit on the newly-shampooed carpet, which is one of my favorite things to do.

26 Responses to the irises