Greetings and salutations, everyone; yes, once again it is I, your popular host, Mani the purebred border collie, here today to let you know just how little has been going on here lately. You may remember me from such similarly-themed posts as “More Endlessness”, among so many, many others. 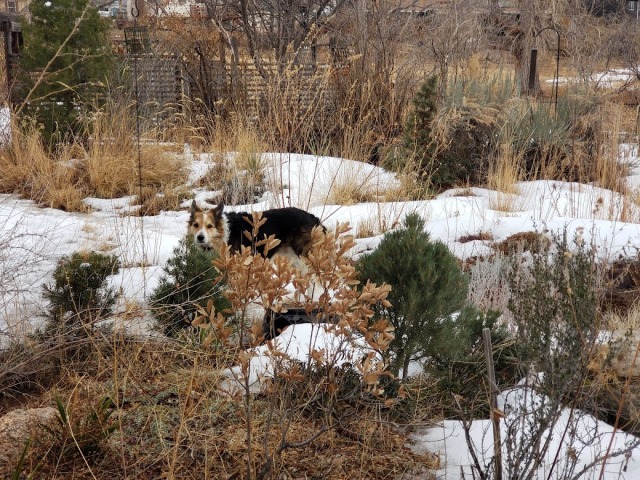 You can see that the snow is still here.

“Another endless winter” is what I keep hearing. The guy I live with says this could very well be the first February in memory where there are no snowdrops in the shade garden. A lot of them were up, before they got covered with snow back in January.
There was one snowdrop pathetically trying to flower in an almost snowless part of the garden, just today. 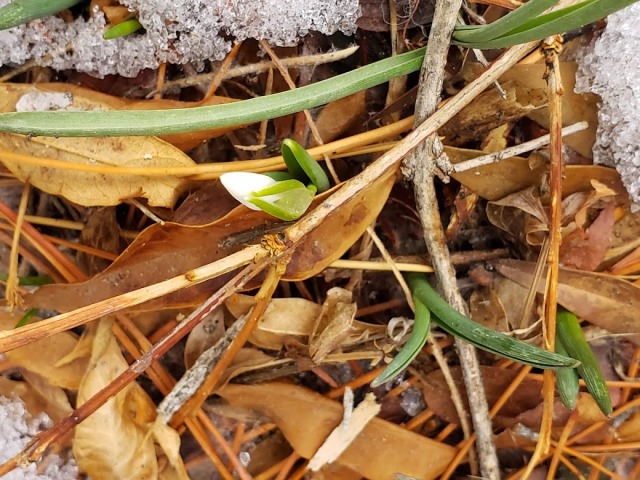 The enthusiasm for snowdrops started years ago, when winters didn’t have so much snow, but now the guy I live with is beginning to wonder if this is all worthwhile.
At this time fifteen years ago, there would have been snowdrops, crocuses, and hellebores in flower, but now there’s just snow. Nothing but snow. The snowdrops would all be finished by the end of March.

Until last night, though, the weather was pretty nice. It was almost sixty degrees yesterday, but that wasn’t enough to melt the ice and snow.
The weather changed by late evening. 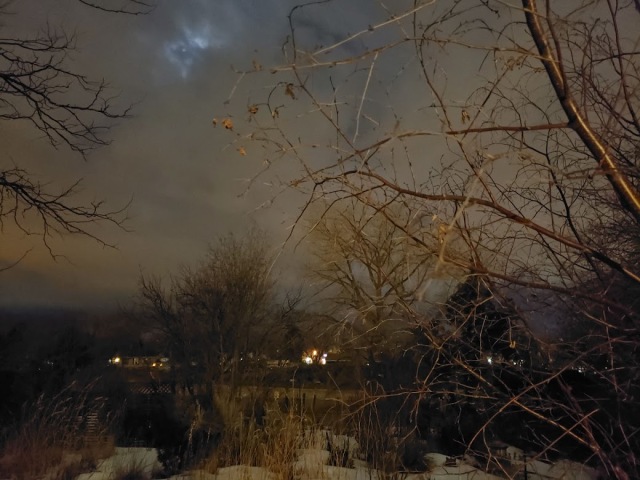 The guy I live with did fill the bird feeders, again, today, when it started to snow, which I guess counts as working in the garden. I helped.

These arrived in the mail today. Not all of these seeds are for our garden. He’s going to try Lilium candidum from seeds this year, because the bulbs he ordered last year, to add to the ones already in the garden, never arrived.

Oddly, the letter that was in the mail box wasn’t picked up.

These came in the mail the day before that. 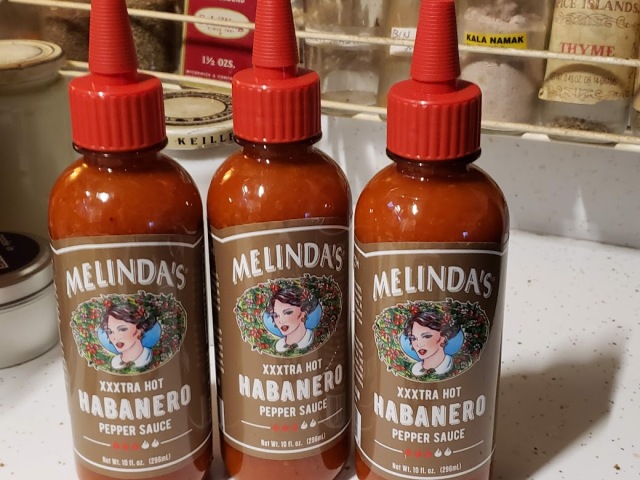 The guy I live with was going to post this picture on Facebook, because, you know, it’s snowing and this is hot sauce, but invariably someone would have made a comment that they couldn’t tolerate hot chili peppers, which the guy I live with would have thought was pretty dumb, because these bottles are staying here. For a while, anyway.

I’ve never had hot sauce, but I hear that Flurry, the first purebred border collie who lived here would lap it up. Maybe I should try it some time. The guy I live with says he’s not going to offer me any, even though he says it’s “not all that hot, compared to other things”. Like the ghost pepper sauce they offer. “Compared to other things” doesn’t mean much to me.

There is plenty to do indoors, anyway, while it’s snowing. I prefer napping. The TV is on a lot, because the guy I live with likes to hear human voices. There are a lot of compact discs in the house, so there’s music from time to time. And even more books, but he doesn’t read much, unless it’s a book on music. He used to read a lot, decades ago, and when his wife was here he read a lot of gardening books, but not any more.

Her memory is kept alive partly by the books she owned. The guy I live with hasn’t read many of them. This is one:

He remembers the day she bought this book, and a couple of other old Everyman’s Library books.

The other day, he found this book, which had fallen behind something. Another old Everyman’s Library book. It was his grandfather’s, and is in pretty bad shape. I guess it was used a lot, maybe a hundred years ago.

He keeps it for sentimental reasons. There isn’t much of anything that’s relevant for this climate, or so I hear.

I guess I’m rambling now. We purebred border collies are supposed to be highly focused, but we do get distracted, like say by squirrels, or in this case, hot sauce and books.
I’ll leave you with a rather atmospheric picture of me.

12 Responses to up the wall