a handful of dust

Greetings and salutations, everyone; yes, once again it is I, your popular host, Mani the purebred border collie, here to talk about all the agitation of the last few days. You may remember me from such posts as “A Super Scary Day”, among at least as few others like this. 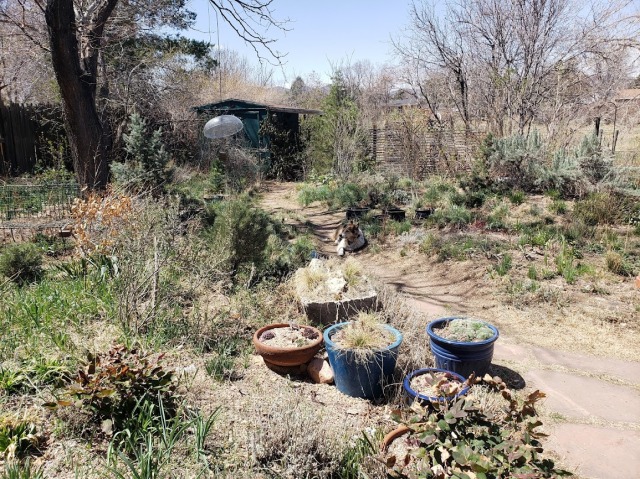 This was last Thursday, I think. You can see how I’m making sure that nothing untoward happens in the garden.
The guy I live with installed that squirrel baffle over the suet feeder, but it refuses to hang correctly. It doesn’t matter, because the suet is for the nuthatches and downy woodpeckers, not for squirrels.

Maybe on the same day, the guy I live with started this project, which he described as “neverending”, to dig all the smooth brome out of the garden, and to bury some of the boards previously used for the bulb frames right against the back fence, to help prevent the grass from invading the garden, which it has, everywhere.
Here I am guarding the spade. 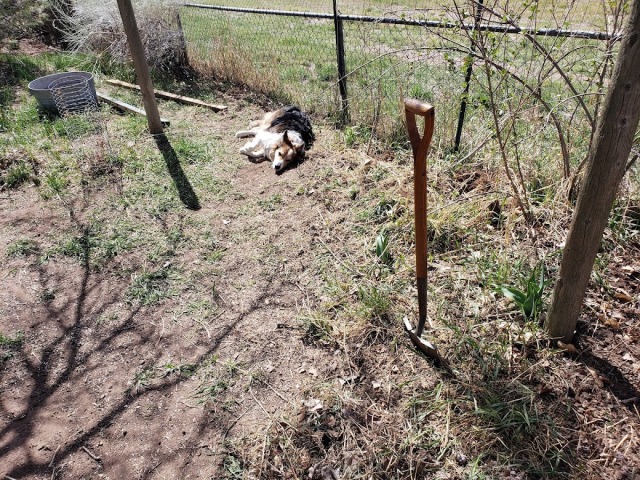 Kind of an expensive spade, made by Bulldog, but the one he had before that was flimsy and broke after a year of use. This one is over thirty years old.
You can see all the smooth brome one the left side of the picture, too. And in the field behind the fence.

The smooth brome features prominently in my post. The grass, which is native to Eurasia, has been planted extensively, both as forage for cattle, and to revegetate disturbed areas. It’s an unbelievably aggressive grass which has, as I said, invaded our garden and is almost ineradicable. The guy I live with hates it.
It grows about three feet tall, but dries out in mid-summer if we don’t have any rain. There are acres of it in the field west of us, in the larger field on the west side of our neighborhood, and some south of us, too.

This last Friday we were under a “red flag warning”, as we have been almost every day this month, because the wind has been blowing constantly, and a “critical fire warning” as well, because the humidity was about five percent, and the wind was predicted to gust as high as fifty miles an hour, if not higher.

It started about mid-morning. I didn’t like it at all. The dust was so thick we couldn’t even see the foothills. 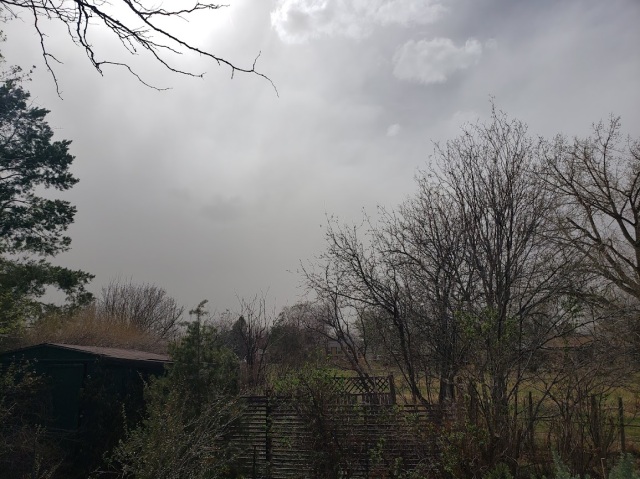 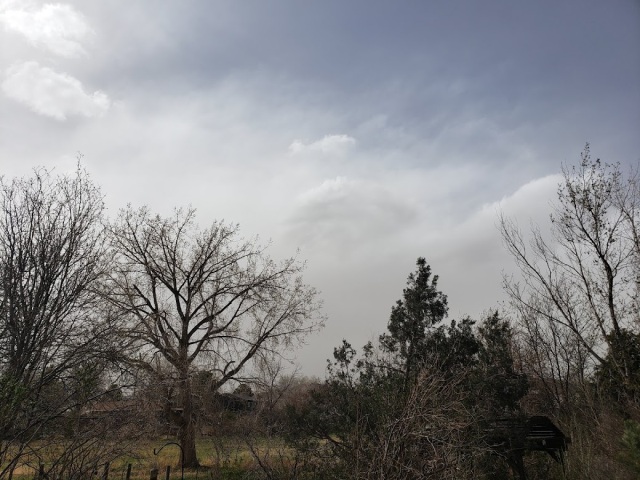 I could tell that the guy I live with was really nervous. A friend of his called; she lives in southern Colorado where the wind was even stronger, and I thought the guy I live with was going to burst into tears, because all of this possibility of loss had suddenly reminded him of the days and weeks after he lost his wife; memories he had suppressed until then.
He told his friend he was packing bags, just in case. She said that was a good idea and would do the same thing.

Well, I wondered what on earth he was doing, going up and down the stairs, and putting stuff in the car. The car which would start. (You know how you fix something, but then aren’t entirely sure it’s fixed, and this uncertainly lingers in the back of your mind? That was the car thing.)
I deduced, since we purebred border collies are pretty savvy, that the guy I live with really had two brains, like the two parrots I talked about earlier. One was the nervous brain, the other was the one that, like when he came home from the hospital after his wife died and sat down and made notes of everything he needed to do, phone calls and such, just went about methodically doing the things that needed to be done, so that if we had to evacuate, we would be ready. Instead of trying to figure out what to do when you only have a few minutes to make a decision.

He packed two bags; one for him, and one for me.

The wind blew and blew, and reports of wildfires appeared on the news. There was a plant sale he’d looked forward to going to, that night, but he didn’t go, because I was scared, and he didn’t want to leave me alone.

Fortunately, nothing happened, and the wildfires elsewhere along the Front Range were contained.
The wind blew again on Saturday, but this time from the northwest, and it was much cooler, with higher humidity.
The guy I live with went to the plant sale, but wasn’t gone very long.

He went to the plant sale again today, because his friend was working there, and so he stayed for a lot longer. 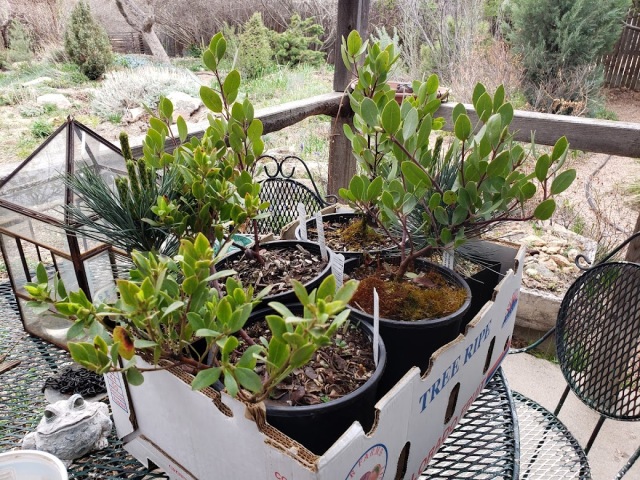 You can see he mostly got a bunch of manzanitas, which I guess are going in the front yard (caged against our resident bunny, for the first few years, because bunnies like to bite them into pieces), and a couple of dwarf conifers, both Pinus strobiformis ‘Loma Linda’, which originated from Jerry Morris, who passed away recently.
The guy I live with was very sad when he heard that news. I guess he was kind of in awe of Jerry; he said that talking to him was like talking to Treebeard himself. He’d never met anyone with such an intimate and extensive knowledge of trees and how they grow. The guy I live with’s approach to gardening totally changed after listening to Jerry.
(You can see pictures of the nursery on the older post, “Trip To Jerry’s Nursery”.)

Well, whew. That was the last few days. They said it might rain this evening, and it did, but not enough to make a difference. The guy I live with even saw a few snowflakes.
After all of this, I’ll leave you with a charming picture of half-asleep me. 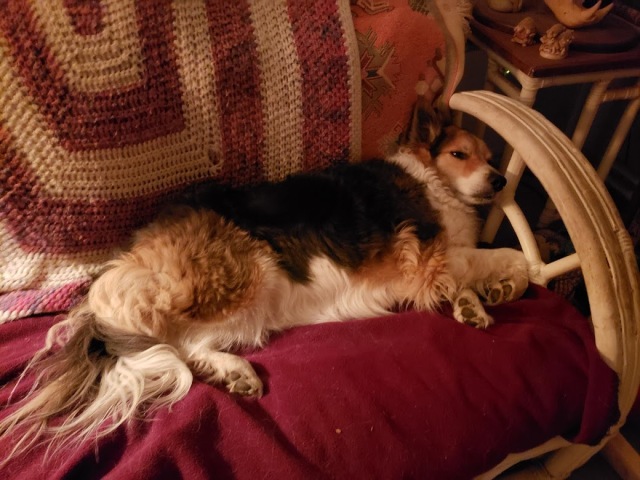 17 Responses to a handful of dust