Greetings and salutations, everyone; yes, once again it is I, your popular host, Mani the purebred border collie, here today to talk about something other than gardening. You may remember me from such posts as “The Trout Are Out”, among so many, many others. 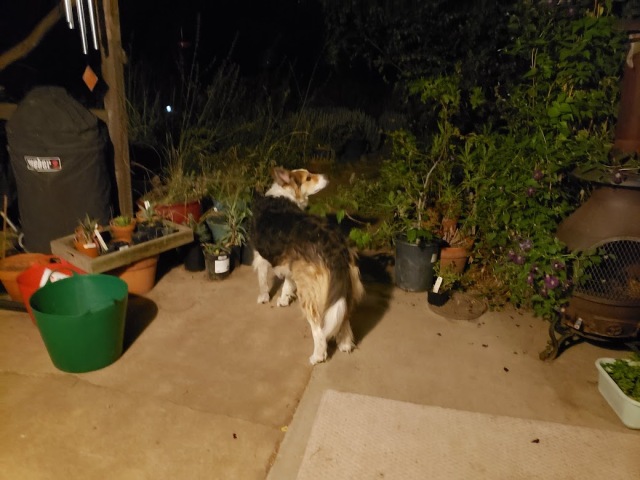 I’m checking things out, because there are things that need to be checked out. Especially at night time, when there are a lot of weird noises.

It’s been really hot and dry here, so not much gardening has been going on, though there has been quite a bit of complaining.
This past weekend was really unpleasant and I spent most of it hiding in my Upstairs Fort, though I was able to go on my walks, thanks to what the guy I live with calls his “superior timing”. He has lived with purebred border collies for a long time now.

You may be wondering at the title of today’s post. It’s German, and it means “free but lonely”. It was the motto of the violinist Joseph Joachim. Of course F, A, and E, are musical notes, so Joachim’s friend Schumann, his pupil Albert Dietrich, and the young Brahms collaborated on a sonata for Joachim. 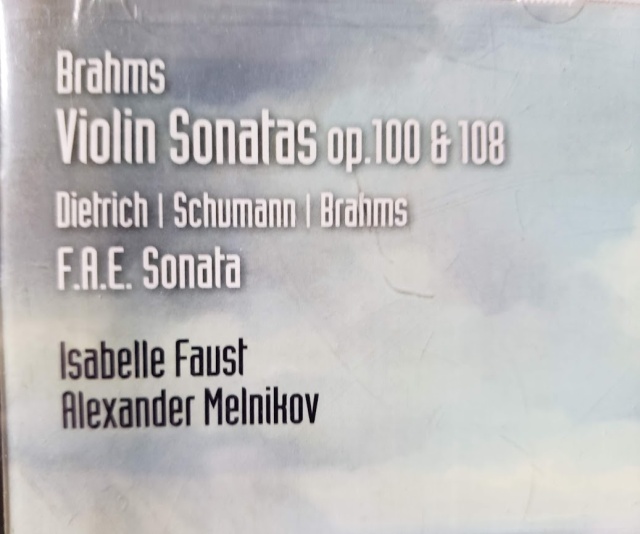 So this really is a thing, but not what I was going to talk about. The guy I live with would have, but I get to do the talking here.

The guy I live with is often pretty lonely, but that’s not it, either.

I wanted to talk about the trout. We see it every day on our walks. 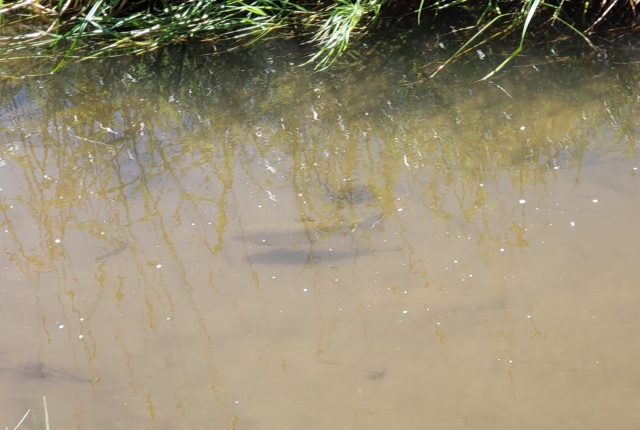 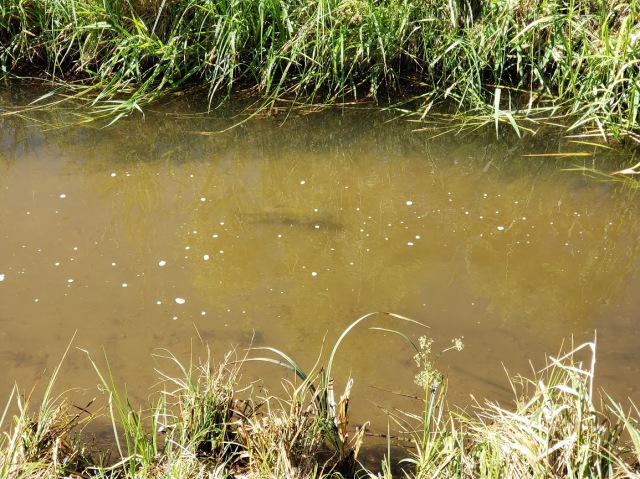 I wondered if it was lonely, and it probably is, but on the other hand it finds a lot to eat. We see it rising to the surface and grabbing stuff. 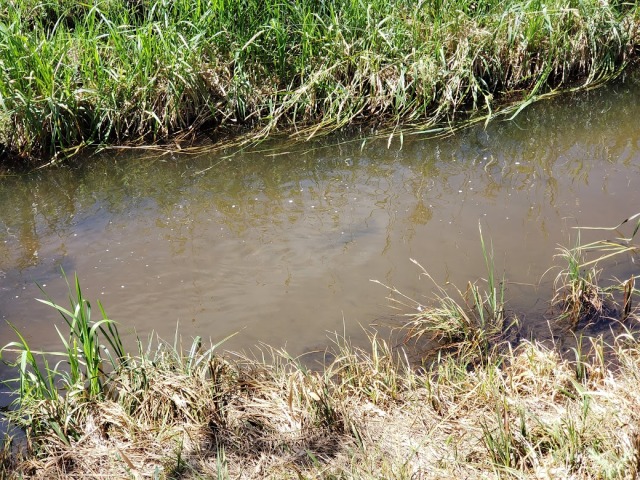 The guy I live with, though, said that as summer goes on, we almost always see more trout in the canal, so it could eventually have a companion (or competition), but he did go on a bit about this “F.A.E.” stuff.
I could even hear him going on about it while I was off looking around in the grass.

Still, I think about the trout, just swimming all by itself.
The guy I live with said he thought about getting a companion for me, but there would have been an issue with the forts, and I admit I like being the center of attention, except when I’m naughty, of course.
Just possibly, he said, the trout is like that, too. It gets all the food, and plenty of room to swim around in. I get two forts.

So there was all this talk of loneliness as we walked along the canal road, and then guess what we saw?
Can you see them? In the canal, almost in the center of the picture. 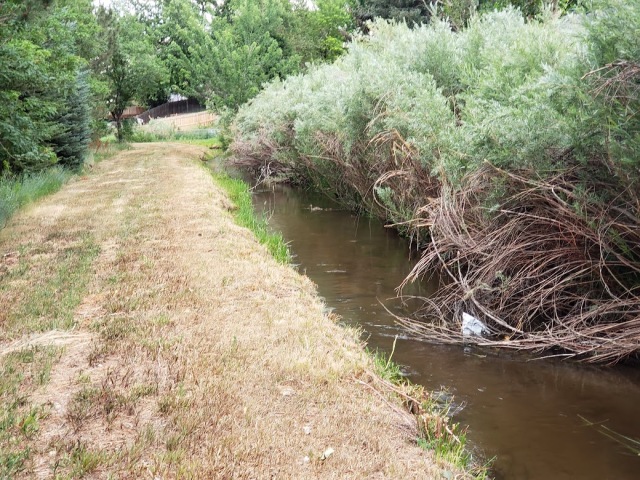 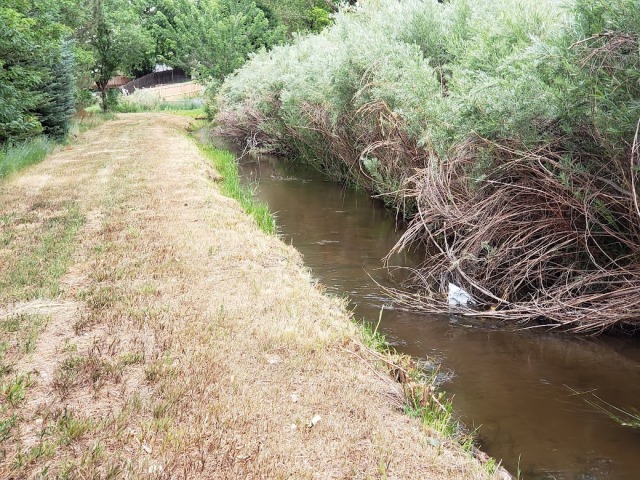 The guy I live with said the pictures would have been better if I hadn’t insisted on stopping every few feet to check things out, but as I said at the beginning of my post, checking things out is what I do. 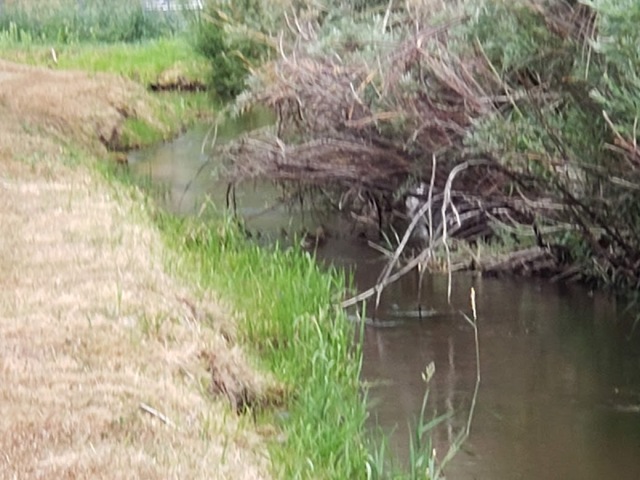 A mother duck and maybe six ducklings.
They all swim together, though we did see one duckling get distracted by something, and then suddenly noticed everyone else was paddling away, so it paddled really fast to catch up.

So that’s it. Not much, but something. That’s our motto. 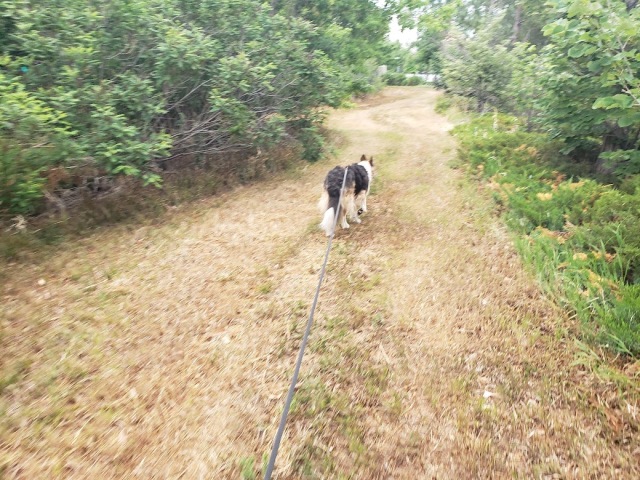