My interest in the single-leaf piñon, Pinus monophylla, probably started when I read Graham Stuart Thomas’s Three Gardens (one of my favorite gardening books) and wondered why it was that this pine was unavailable in the nursery trade in North America. After all, it’s native to the Great Basin, California, Arizona, Baja California, and so on. It will grow with about six inches of annual precipitation (grow slowly, that is). It’s similar to the regular piñon (Pinis edulis) but bluish, with single needles; the nuts are edible as well.

For a long time it was thought that the single needle was really two needles fused as one (because Joseph Dalton Hooker said so, and he worked at Kew, and that was that) but research, described in Lanner’s The Piñon Pine (another terrific book), showed that the growth of the second needle in the fascicle was suppressed by a mutation.

So they grow this totally cool pine in England, but not here.

You would think with all this supposed interest in saving water that everyone would want at least six of these, but, still, try finding one. I was lucky enough to get one many years ago, and it has endured everything that Denver’s weather can throw at it, including being completely knocked out of the ground in the March blizzard of ’03. (I replanted it and it took off, like a snail.)

Peattie (A Natural History of Western Trees) says “The growth of this tree is painfully slow. A tree with a stem only 6 inches in diameter has already seen a century of arid seasons pass, and still its life course may not be half run. In youth the short thick trunks are capped by pyramidal crowns of rather straight and uplifted branches. An ancient Nut Pine, however, is almost unrecognizable, in shape, as the same thing, for the crown has become short and flat, and the branches are all twisted and bent low, and the years will but add to the gnarled look of this manna tree of the Mohave.”

Okay, there’s the reason no one wants one. It might get ugly in three hundred years.

There are a number of dwarf selections made by Jerry Morris of Lakewood; I had to have as many of these as possible, of course. These are from witches brooms. 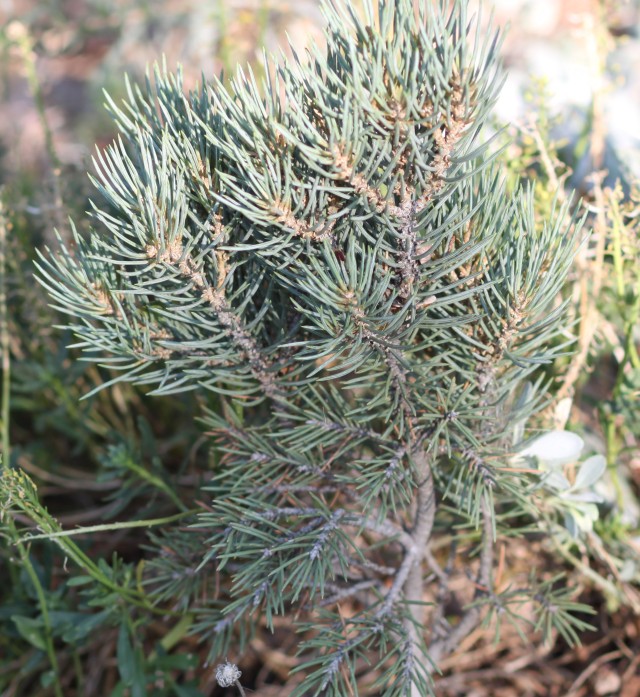 I was also fortunate to get some grown from “broom seed”, that is, seed that the witches broom itself produced. There were some plants in the far corner of Jerry’s nursery that needed a home; I tried desperately not to be a hog and so left one. There are four here, well cared for (really), and are looking pretty good. For now.

Pinus monophylla from broom seed..I know this isn’t so focused