This trip was taken in 2007. But first, I’m going back to Plainview, also a 2007 trip, for digital images of Pulsatilla patens taken at the same time as the slides I posted here (down at the bottom of the page).

The burned area where the pulsatillas were blooming. 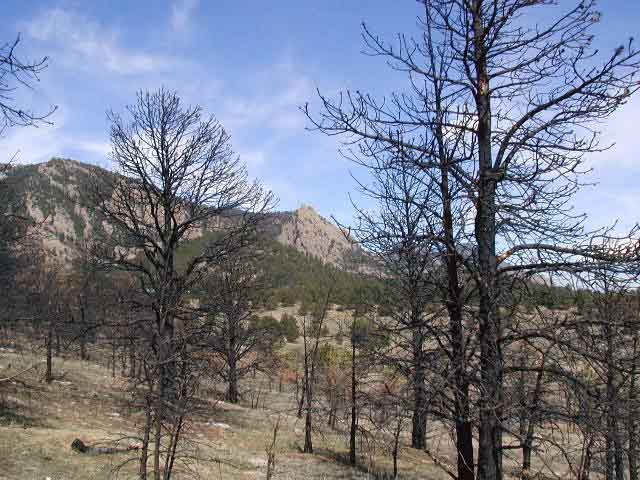 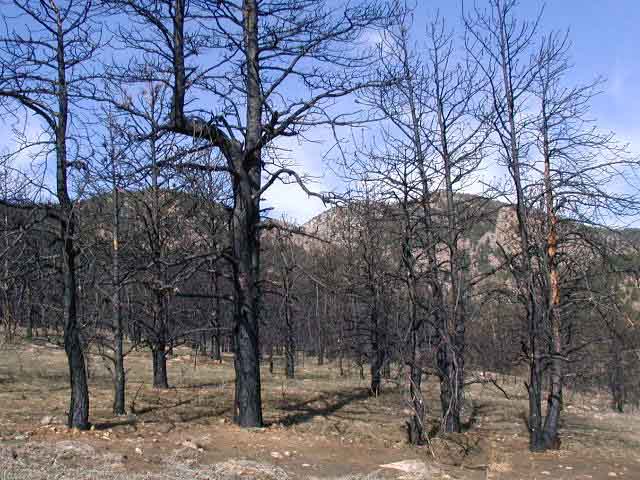 Looking east, I think that’s Rocky Flats in the distance, on the right. Standing in the mountains, looking at the plains. (Hence the name, Plainview. I think it’s not really a town, just a place.)

And the plants. The specific epithet means “open”, as in spreading open, obvious in the second picture. 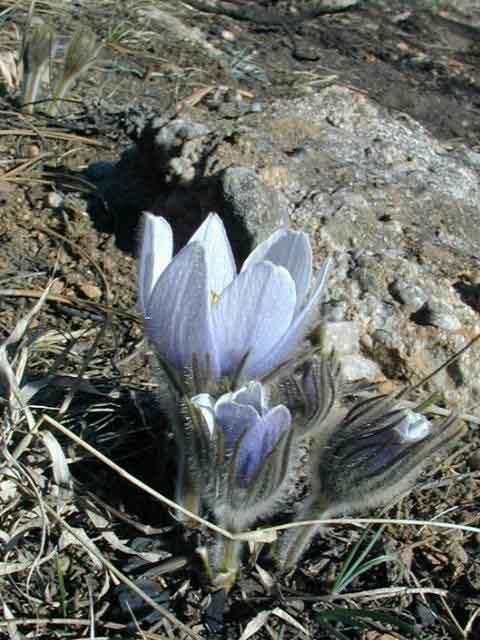 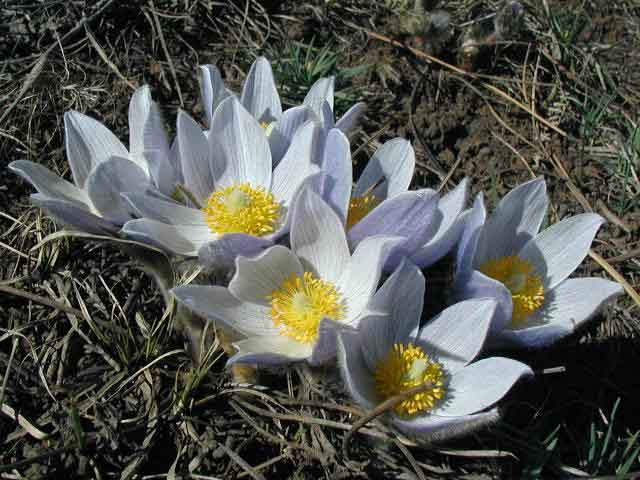 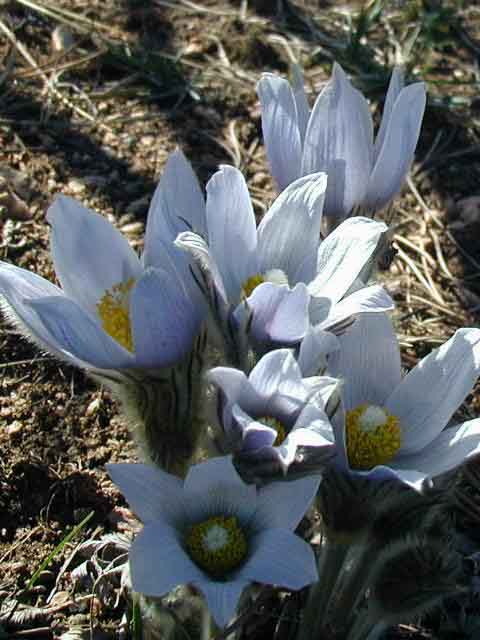 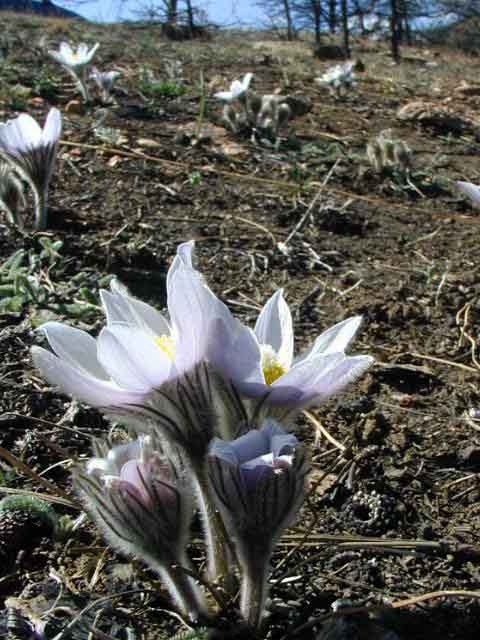 Now to Jerry Morris’s conifer nursery, which I believe is closed. Not open to the public; the grafted conifers were raised there. I almost passed out when I saw the place, dwarf conifers everywhere, and bonsai specimens in the wooden boxes. Jerry has something like 850 named dwarf conifers, many of which are in the trade, and all of which do very well in Denver’s climate.

The bonsais are either made by taking a snag and shaping it, then routing a groove up the snag, and tacking the trunk of a dwarf conifer from a witches’ broom into the groove, or, in some cases, they are “natural bonsai” specimens.

A rather large number of the little conifers, ones in pots, found their way to my house. Some were horribly eaten alive by rabbits, which prompted me to start using chicken wire cages; chicken wire is now a permanent, and of course highly attractive, feature of my garden.

And I should say that the nursery wasn’t entirely devoted to conifers; there were dwarf or unusual selections of all sorts of native shrubs and trees. 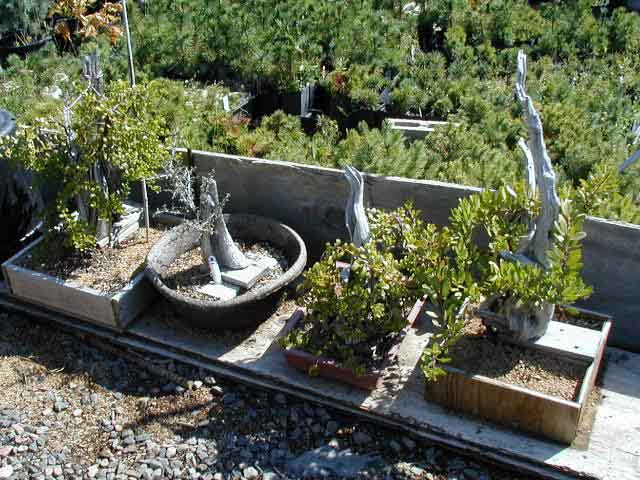 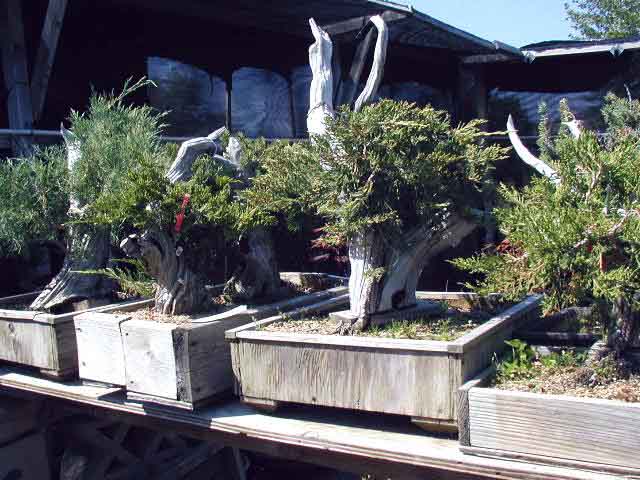 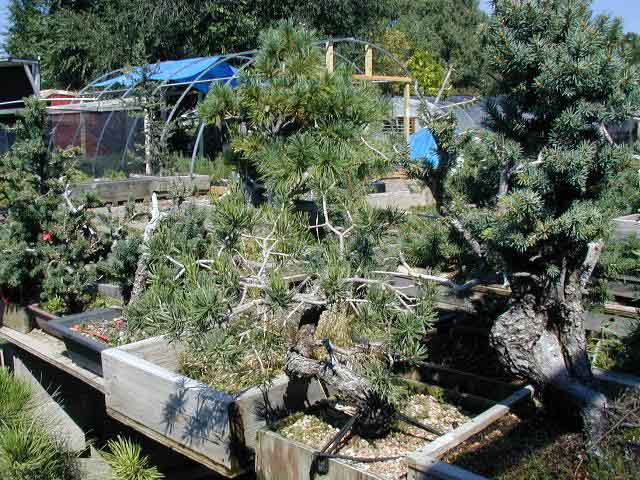 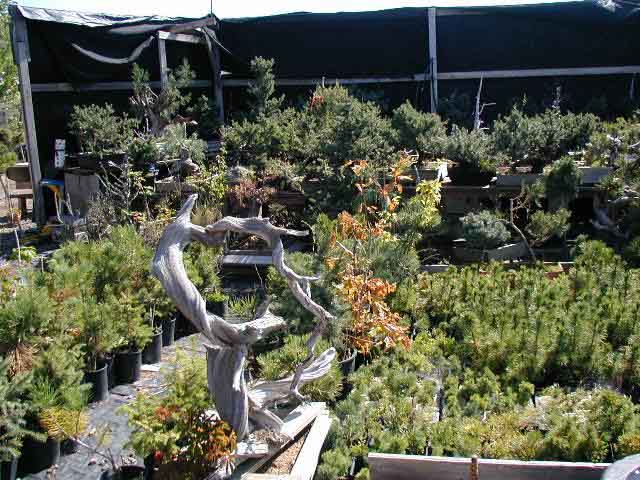 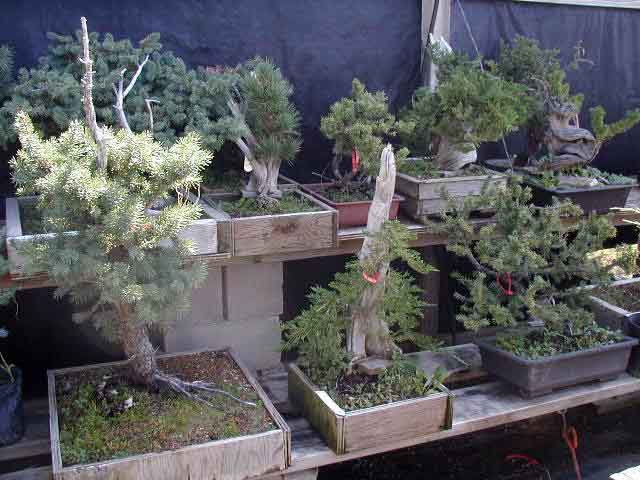 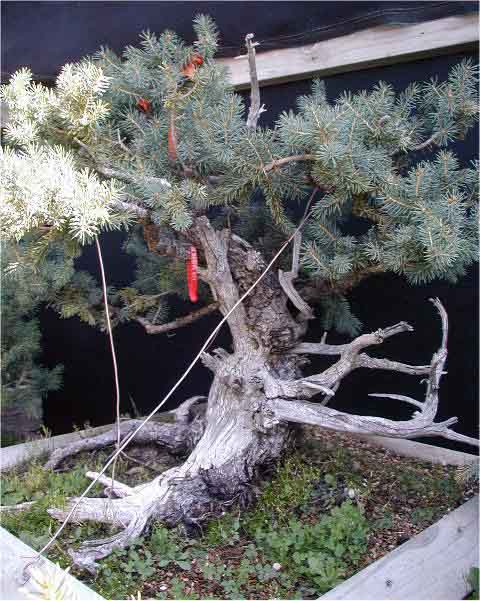 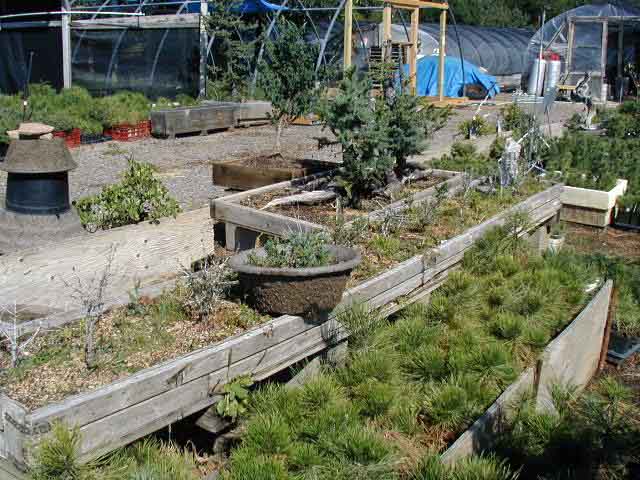 In the trough above, mountain-mahoganies (Cercocarpus spp.)  Why didn’t I see these when I was there? Probably because I was overcome with Hyperacquisitivosus plantarum, and could hardly see straight. (Other symptoms include increased heartrate; inability to visualize one’s own garden and the lack of space it has in reality; temporary amnesia when it comes to things like impending bills, amount of money in the bank, and the necessity for expenditures like food, clothing, and so on.)

Below, a picture of an individual with a severe case of H.P. at Harlequin’s Gardens in Boulder. Typical trance-like body language, not looking down, but off somewhere in the distance as though being sent messages from another plane of existence. Note beard and hat used as a disguise, and deceptively small number of plants in left hand, feigning high degree of selectivity, when in fact there is a well-hidden cart packed to the skies with plants just around the corner. 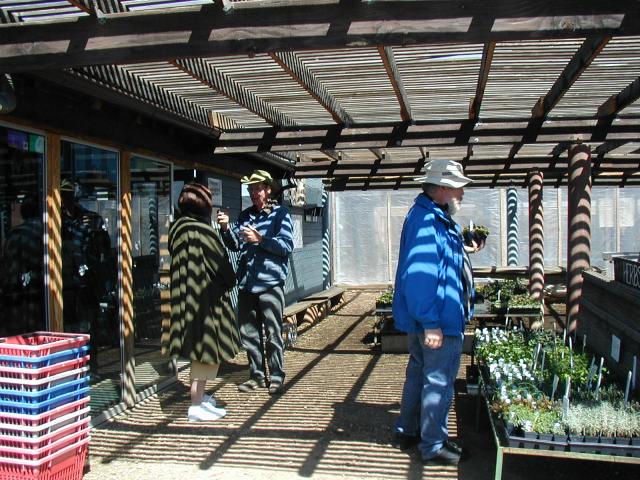 I wanted this. (And if I’d seen the little plants in the trough, I’d have wanted those too.) 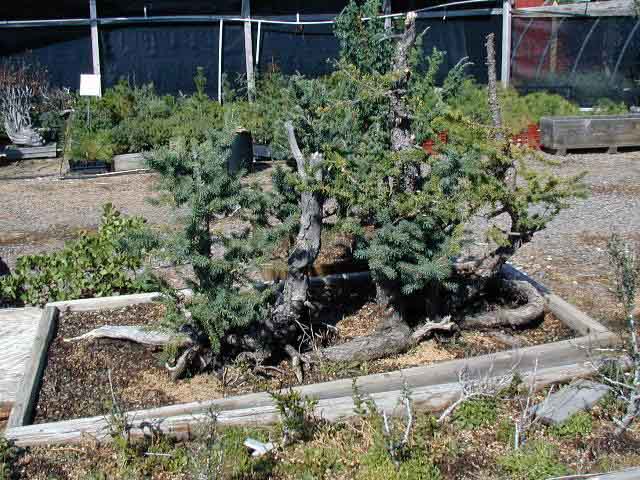 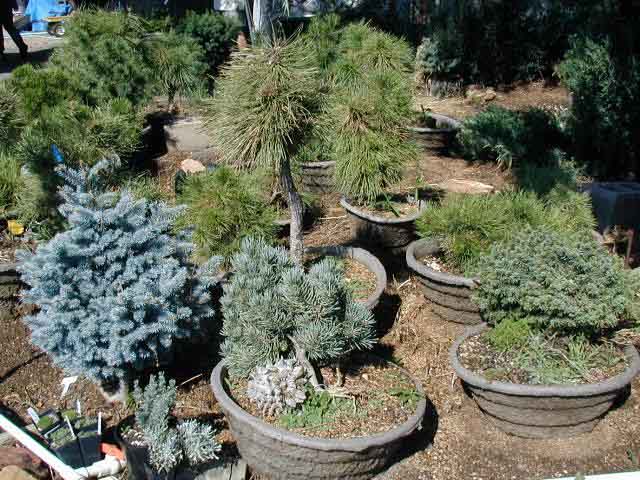 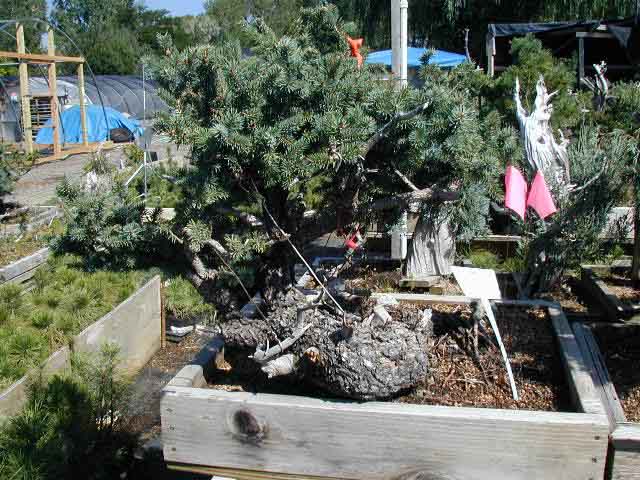 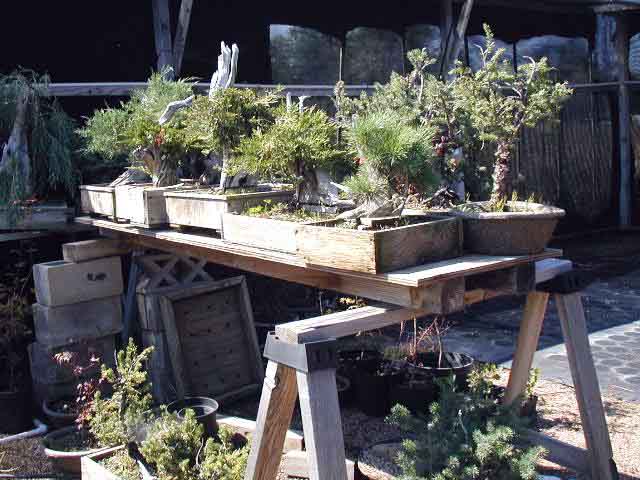 And, okay, this one too. And the one next to it. 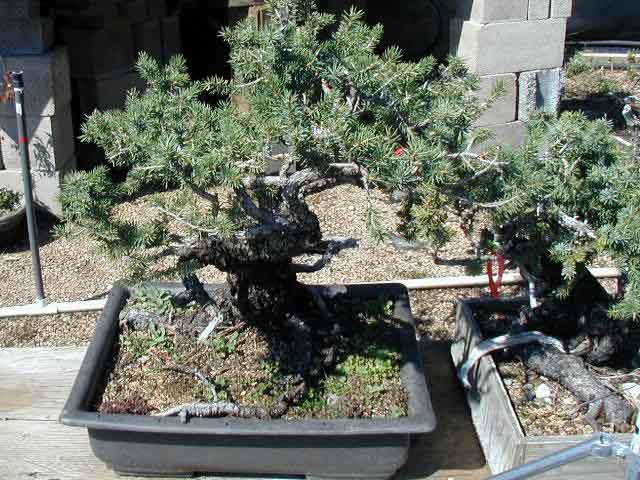 Jerry’s named dwarf conifers can be had from Laporte Avenue Nursery , Coenosium Gardens and Porterhowse Farms among other places.

idle
View all posts by paridevita →
This entry was posted in Uncategorized and tagged hyperacquistivosus plantarum, Jerry Morris, Pulsatilla patens. Bookmark the permalink.

4 Responses to trip to Jerry’s nursery