I got a yard of 3/4 inch or less gravel today, and shoveled it onto the gardens. Quite a bit went onto the new bed. It drizzled for hours today, and will probably change into snow tonight. I prefer just drizzle, but no one cares what I want.

In deference to Desert Dweller I moved the Yucca faxoniana, not as far as he suggested, but moved it nonetheless. Visitors will just have to beware of the thing. (The picture makes it look like it’s farther from the driveway than it really is.)

I also moved the three Agave parryi out of this garden; there was too much feng and not enough shui. The pots with cactus were moved from their place along the path because it’s a drag brushing against them. The little blue pot is empty, creating an air of mystery and suspense.

The new gravel, with pieces of different sizes, makes the bed look less depressing, at least to me.

I also moved the Grusonia clavata. Closer to the front walk, but it won’t reach out and grab anyone. This is the “giant form”, by the way; it’s almost twice the size of the typical species. 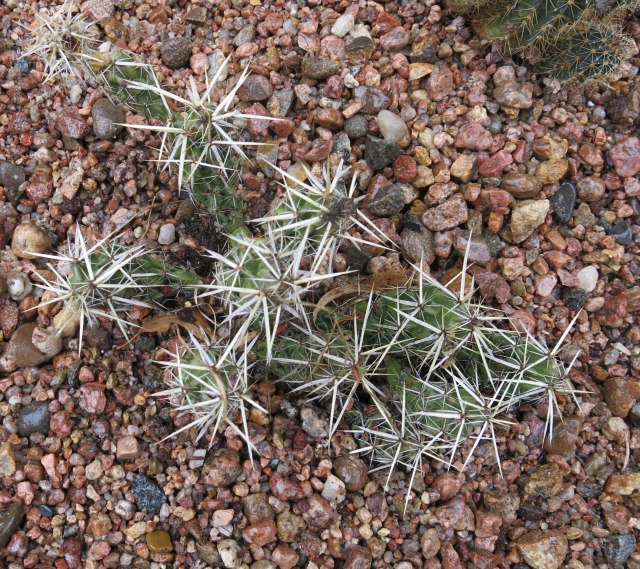 Down in the laundry room, more seeds are germinating. I sowed several packets of Escobaria vivipara from Mesa Garden exactly one week ago. The seeds were surface sown (visible in the picture), misted with a sprayer, no pretreatment. They germinated last night. 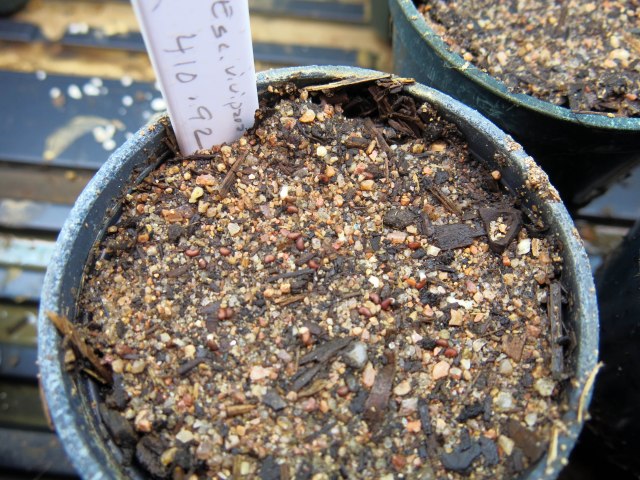 Close up. I circled three germinated seeds, but forgot the one in between the two circles and the one in the corner. There’s also one to the right of the two circles. The little fuzz at the bottom is the root.

idle
View all posts by paridevita →
Quote | This entry was posted in Uncategorized and tagged Escobaria vivipara, Yucca faxoniana. Bookmark the permalink.