Hello all, it’s me, the dog, again. Chess. You may remember me from posts like “May Day” and “Let the Whining Begin”, as well as all the other excellent posts I’ve done. The reason I’m doing this one is that the guy I live with is too tired to type, and he blames me for  snoring all night. I slept really well, thank you.

Here I am looking very sad. What this actually is, is a staring contest. The guy I live with has always been able to win staring contests with all the other border collies who have lived here, but not with me. I always win. I can stare for hours. And I do. I’m standing by the refrigerator waiting for a biscuit. I’m usually more in focus than this, too. I bet I’ve stood here for hours and the guy I live with hasn’t even noticed me.

Anyway, we got our property valuation the other day, and the property has lost some value. It didn’t upset the guy I live with at all, but he was still going to call them and say that he finally filled in the smelly, gross pool, and so maybe someone should come out and look at the property again. I thought the pool smelled okay; the guy I live with said he was getting calls from out-of-state about the pool, but I think he was exaggerating. This is the work he did just the other day. See? All filled in. 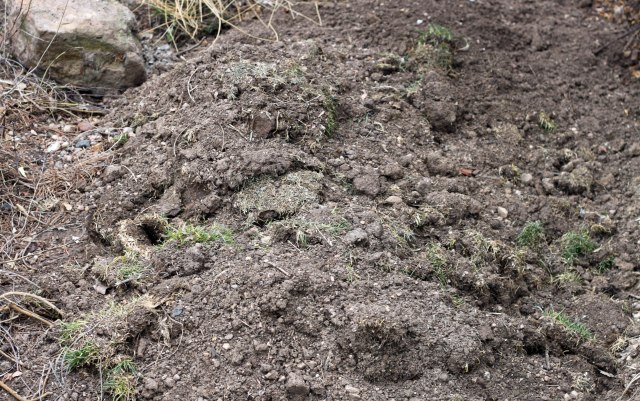 Like most gardeners, he had an extra pile of dirt lying around just for the purpose of filling in a hole.

The guy I live with says this work alone should double the value of the property. I think he’s slightly off his rocker, but I never tell him so.

He also said that most of the garden was dead after this winter and spring, but I have pictures to prove otherwise. Here’s the native corydalis, Corydalis aurea. Some years it’s everywhere, but this year I think there’s just the one.

There are some other things in bloom too. The porophyllum saxifrages are flowering; they usually flower in March but the guy I live with says this has been a weird year. Here’s Saxifraga ‘Athena’ with Festuca brachyphylla surrounding it.

And Saxifraga ‘Jana’. There are only a couple of flowers but the guy I live with says this is a really big deal because …..well, I lost interest while he was explaining it, but here’s the picture anyway.

And Saxifraga ‘Luna’. Or, as the guy I live with says, S. x millstreamiana ‘Luna’. Like that makes a difference. My mommy really liked the saxifrages and that’s what’s important to me. 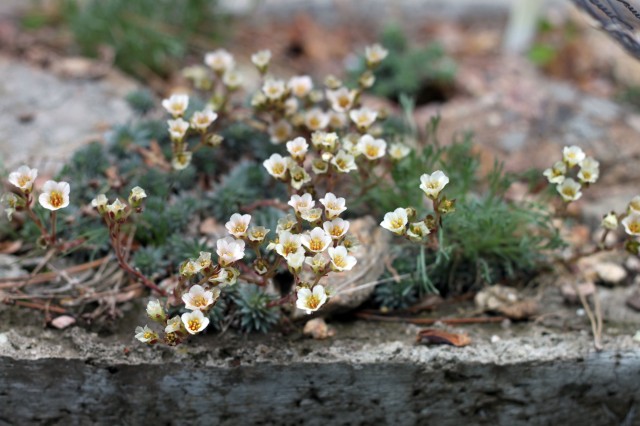 That’s all for now. You can see that there really are things blooming in the garden, so the moral of all this is, don’t believe what the guy I live with says, at least all the time.

I don’t snore that much, either.