Once again, it’s me, Chess the purebred border collie. You may remember me from such excellent posts as “Stinker’s Revenge” and “Mister Always Right”, among others. I also appear in pictures, though I must say that today’s makes me look completely ridiculous. The guy I live with thinks this is funny. What’s really funny is his idea of focusing. 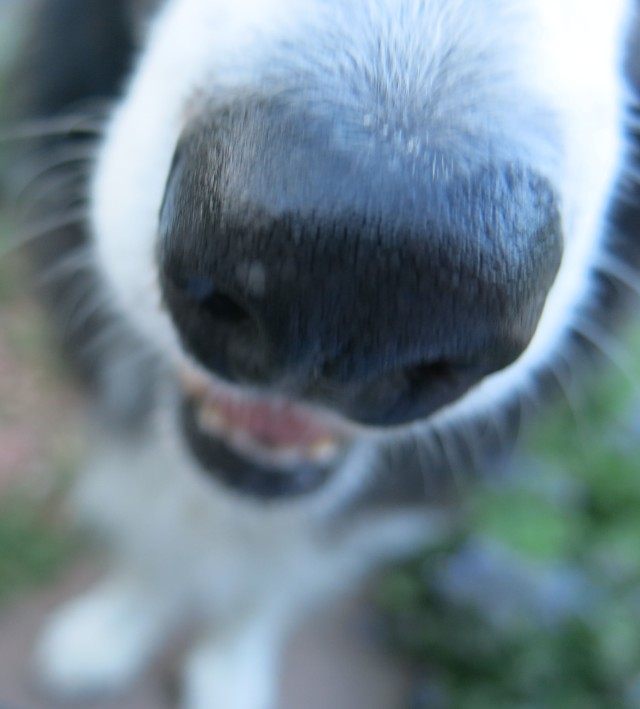 He was gardening and I came down the path to see what he was doing, and that’s when I got my picture taken. What he was doing is something I bet he will regret later, but it started out dumb, and things that start out dumb usually end up dumber.

The guy I live with has these plants he calls “white whales”, like the whale in Moby-Dick, which he read, of course; otherwise he wouldn’t’ve made me put the hyphen there, though he does admit that he remembers less than zero about it. Except that it was about a white whale and a guy named Ahab and someone you called Ishmael and someone named Starbuck who was first mate on the Pequod. So, something anyway. He reminds me that John Donne (so he says) once said that when he had read a 600 page book the only thing he remembered about it was that he had turned 600 pages, and T.S. Eliot confessed he had never finished War and Peace (the guy I live with never even started it).

One of his whales is the dwarf milkweed, Asclepias cryptoceras, which, since he claims to be a literate American (I should note that he just found pieces of a potato chip in his shirt pocket), he rhymes with rhinoceros. The last name, I mean. Oh, the guy I live with says “the specific epithet”. Weber in Colorado Flora Western Slope calls it “the crown jewel of the Colorado flora” and the guy I live with says it’s easy to germinate but after that, not so easy.

So, he germinated seed he got from Alplains, sown in pots outdoors in January. Then the seedlings started to elongate because they were in too much shade. He looked at them, saw what was happening, and didn’t do anything. Well, finally, this evening, he planted out the two pots into a trough, and the seedlings spilled all over the place, he said a couple of naughty words, and eventually jammed the poor seedlings into the trough where I bet they die within a few days. What he should have done (but he never asked me) is plant the seeds directly into the trough’s soilless mix in January, and let them come up right in the environment in which they will grow. I won’t show a picture of the poor seedlings.

Pretty close to that are plants of what he claims are Fendlera wrightii. Or, if you insist, Fendlera rupicola var. wrightii. If you do a search on this blog you can see pictures of Fendlera rupicola. He got some small plants at the Mother’s Day plant sale at DBG, but when he saw these at Timberline the other day, he got all excited and bought two. This is one of his white whales, too, and not just because the flowers are white. I don’t think it’s that exciting, but I’ll go along with all the enthusiasm if I get an extra biscuit.

Meanwhile, I’ve had some trouble with ticks, which the guy I live with had never seen before, and totally freaked out when he saw them (my mommy would have been much calmer); he got some stuff to squirt on me but then decided to try a natural tick collar which I haven’t gotten yet, but I do like it when he checks me for ticks. I always like extra cuddles, but then again, the guy I live with tries to steer me out of the long grass on our walks, which isn’t so great, though he says when it dries out, which it’s starting to, it’ll be okay again.

I’m rambling a little. Dogs do that. Border collies are really super focused, but living as I do, with the guy I live with, I tend to lose focus, because unless he writes stuff down, the day is just chaotic, with gardening, napping, gardening, and more napping. Sometimes even more napping.

Anyway, before I go I should mention that while we were admiring the fendleras (or I was pretending to), I noticed a nice lemon scent, and it was from a bunch of Oenothera caespitosa right next to me. He’s taken their picture before, but, like he says, why not do it again.

I guess that’s all for now. I hope you like the picture of my nose.

idle
View all posts by paridevita →
This entry was posted in Uncategorized and tagged border collies, Fendlera wrightii, oenothera caespitosa. Bookmark the permalink.