It’s me again, Chess the purebred border collie. You may remember me from posts like “Wright’s White” and “Tick Talk”, which, even though excellent, were not as much about me as they should have been. The posts that are mostly about me are the best.

I was left alone once again. The guy I live with said he had to go to Boulder, and he went, and I stayed. He forgot the camera, of course, so you’ll just have to imagine everything. Like I do when I waiting here at home, lonely and sad. Here I am looking sad because I’m fitted for my device for walking, but we’re not leaving as quickly as I think we should be. 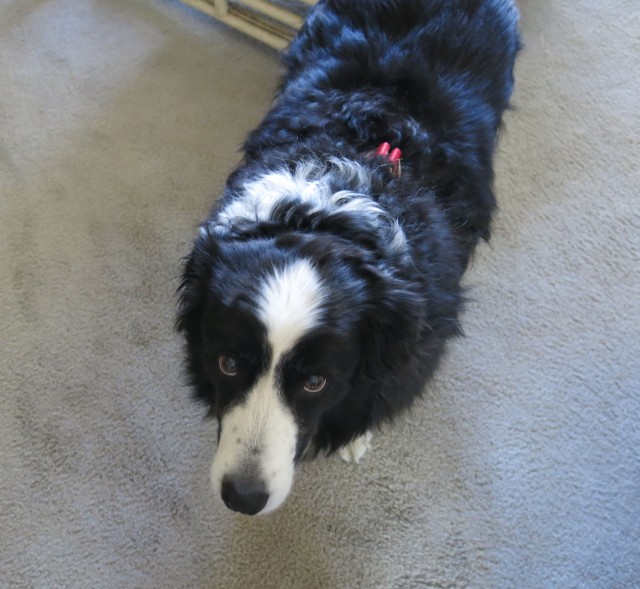 So the guy I live with went to Boulder without me. He said he was going to Only Natural Pet, which I know he did, because he brought me back a citronella collar to wear so I can repel ticks without having to do anything but smell like citronella, and a nice brush, a squeak toy, and some other things. So that part was okay. There wasn’t anything for me to eat, which was disappointing. A plain cheeseburger would have been excellent.

He also went to Harlequin’s Gardens, again, and bought a bunch of plants and stayed for a really long time. His excuse is that there’s so much to look at it took him a long time to walk past everything ten times. He said he could have taken me, since I have a Ruff Rider Roadie that hitches to a carabiner which is attached to the back seat headrest, and I can have both back windows open and be completely safe, but there’s a rifle range just to the north of the nursery, and I wouldn’t like that. I know it without experiencing it.

He came back with a lot of plants which he claims he has places for. Since quite a few have been planted, he must have been right. They’re probably all planted way too close together.

Anyway. About the title of my post. The guy I live with reminded me this is the title of a Led Zeppelin song, but then I had to remind him that his book, “High and Dry” is also the title of a Radiohead song. He and my mommy listened to a lot of Radiohead, even though the guy I live with has been listening to classical music since he was eight, which is a very, very long time. My mommy bought one CD, and didn’t think much of it, and some time later the guy I live with read in The New Yorker that OK Computer was “the Dark Side of the Moon for the 90s generation”, and so he bought a copy, listened to it, and thought, “Huh”. Then he noticed he was listening to it over and over and over again and he realized what The New Yorker critic meant. So he bought more Radiohead CDs and he and my mommy listened to them over and over again when they drove around to go to the places they liked to go to.

The day before she died my mommy listened to Radiohead’s “Pyramid Song” over and over again, just hitting the replay button on the car CD player. He gave away all his rock CDs a few weeks later, and won’t listen to music like that any more. Which is okay, because I like music that’s more complex.

You see how I ramble? I don’t have the attention span that the guy I live with does, though I do obsess about certain things, though as I get older, the obsessions aren’t like what they were when I was little. The guy I live with obsesses about a lot of stuff. He was obsessed with my mommy when she was alive, and obviously still is, so he thought moving to California would be “just what we needed”. He says you plant something and two weeks later it’s so big you think about chopping it down. Instead of like here, where things hardly grow, and then they die.

California, the guy I live with tells me, is expensive. He thought about playing the lottery, but today he found a way to afford practically anything he wanted there. He’s going to sell a plant and make a fortune. So he says.

Here is Salvia dumetorum. This came from Archibald seed, ultimately, but the seed for these plants came from Panayoti, who probably doesn’t realize that the guy I live with is going to become a zillionaire because of it. And by the way, I see that some online sources say that this is a synonym for S. stepposa. It’s the other way around, according to the Kew database. Just to clear that up. And dumetorum means “of thickets”. It’s been growing in the front yard and has “never tasted hose water”, according to the guy I live with.

You can easily see that the flowers are purple. Well, this morning, the guy I live with looked out the front window, and said, “Huh”, the way he does. This is what he was looking at.

That’s right, a pink Salvia dumetorum. The guy I live with says to start the bidding at $50 million US.

He’s not serious, of course. He rarely is. But I understand that thunder is rare in California, despite movies like “The Big Sleep”, say the part where Humphrey Bogart goes into the bookstore run by Dorothy Malone, and it’s raining, and he has a bottle of “pretty good rye” in his pocket. The guy I live with is a big fan of Raymond Chandler, too. And of course any place that doesn’t have scary thunder sounds fine to me.

I do go on, don’t I? If you think I’m bad, then you should spend an hour with the guy I live with, who might tell you one thing during that time. I’ve said a lot of things. Most of which were interesting.

idle
View all posts by paridevita →
This entry was posted in Uncategorized and tagged Salvia dumetorum. Bookmark the permalink.

8 Responses to going to california