Sunday after the snow

Greeting and salutations, everyone; yes, once again it is I, Chess the purebred border collie, here to bring you the most up-to-date news in the garden, except maybe today when I’m a couple of days late, but since you didn’t know it until now, it might still seem up-to-date. You may remember me from such posts as “It Raineth Every Day” and “A Change Of Pace”, among others.

Here I am not wanting to have my picture taken. 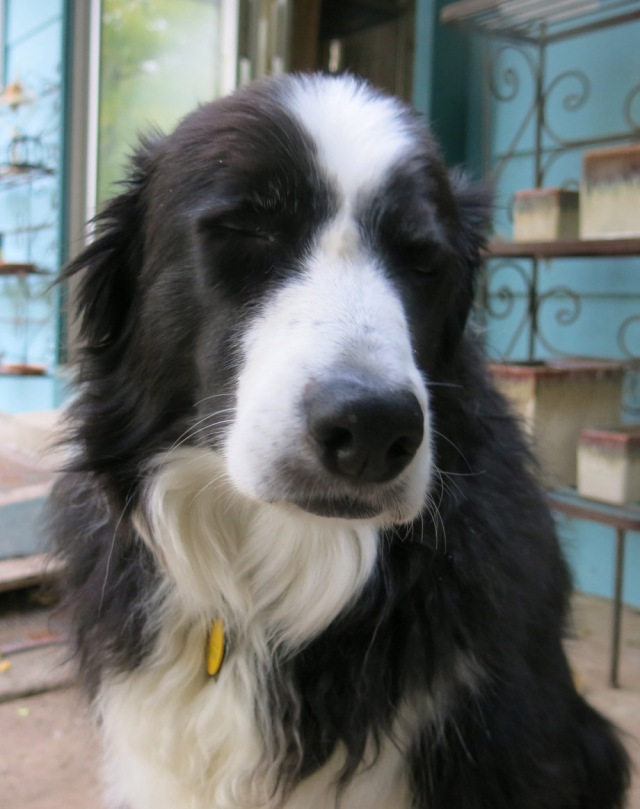 The guy I live with suggested I give today’s post this title because he thought of it. I know, that sounds strange. Just because you think of something doesn’t mean it’s worth sharing. He said he remembered getting mad at my mommy (he never stays mad for more than a few minutes) for throwing away the dust jacket on his old copy of Henry Miller’s Sunday After The War, and so, as he would say, “hence the title”. I guess. He also got mad when she accidentally broke the ashtray he had from the “21” Club, shades of Grace Kelly and Rear Window. His grandfather went there once, at least, and that’s how he got an ashtray from a place he’ll never go. She was all sorry and everything; just as sorry as he was when he chipped her polar bear sculpture.

That probably wasn’t very interesting. What was interesting is that it snowed the other night.

It wasn’t quite a winter wonderland by the time the sun filled the garden, but I liked it. Border collies love snow. 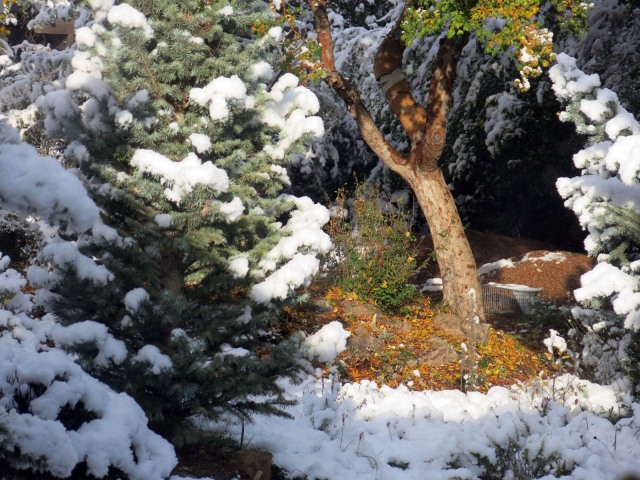 It melted shortly after that, but not much gardening happened that day.

Today, I decided to get up with what the guy I live with said was “getting up with the chickens”, which didn’t make much sense until the neighborhood rooster started crowing. Yes, there’s a rooster. It crows all day long. I don’t understand why there’s a rooster in the neighborhood, or why they call it “crowing” instead of “roostering”. Continuing with this fascinating train of thought, you might be amused to know that the guy I live with only realized last year why they call them “roosters”, because of course they roost, but then he wondered why they don’t call hens roosters, since they roost too. The guy I live with’s usual explanation, that life is strange, will probably do here, huh.

Anyway, this is what being up with the chickens is like, on a cool cloudy morning. 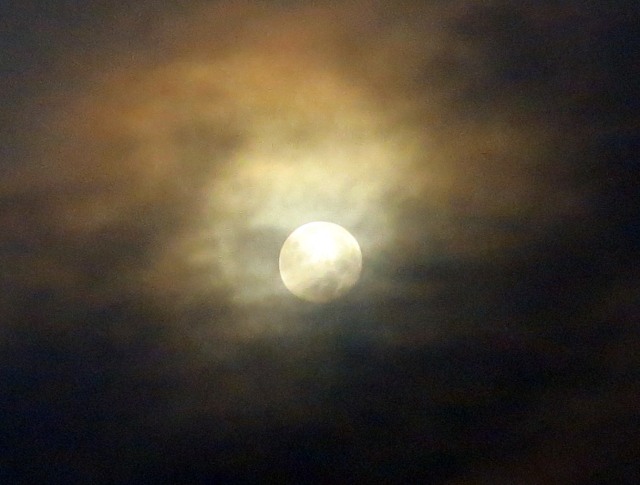 He took a few garden pictures, like last time, but they mostly came out “less subfusc” than he had anticipated. Here’s what the guy I live with insists is a lawn, not as subfusc as he had hoped it would be; taken about 5:30 in the morning. His new fence in the background. 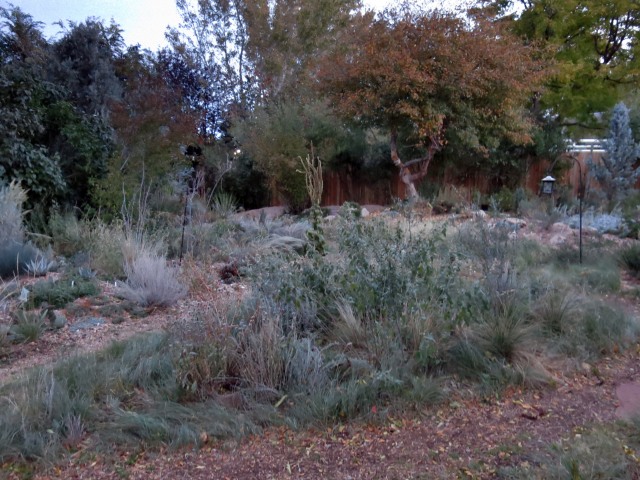 Meanwhile, the guy I live with has been pondering the “postmodern garden exemplified by plantings kept to a minimum”, or so he says. It could just be that he’s losing his mind. I noticed on our walk the other afternoon that he had put on two different shoes, and somehow I didn’t think that would qualify as, you know, a Statement.

Nor is this. The guy I live with spent a lot of time sawing, and digging, and things like that, and when I came out to look what he was doing, this is what greeted me. 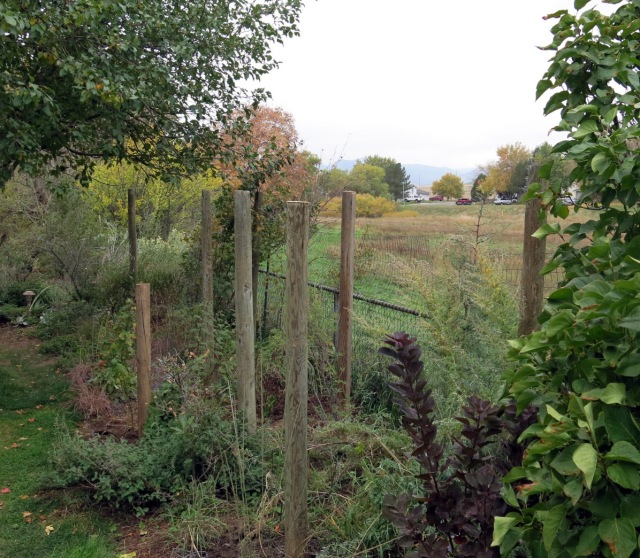 For one thing, you wouldn’t believe what this back border looked like ten years ago, before the guy I live with got all postmodern on it, but in truth, there are a lot of new plants here which you just can’t see. Mostly native grasses he grew from seed, and things like that. (You’ll probably wonder what I mean by “things like that”, but I don’t know; I only know it’s not all native grasses.)

So today, he added two poles to the Pole Garden. We don’t call it that, but if you weren’t really paying attention when the guy I live with showed pictures of owls sitting in the garden, we would say they sat on poles in the Pole Garden. You know how people say that gardens are “designed to be read”, well, this one isn’t. It has a definite purpose. It may look odd, but in reality, it’s completely utilitarian.

Whatever he says, huh. I learned that look from my mommy, who did the same thing when the guy I live with said stuff.

You can probably suspect where I learned to ramble on about not much of anything. At least you got to see two pictures of me. (Two rather cute pictures, if I do say so myself, which of course I do.) It started to rain and I got to go on my walk in the rain, and got completely soaking, so it was excellent. It’s supposed to snow a little tonight, too, which is equally excellent.

20 Responses to Sunday after the snow