Hello everyone; once again, it is I, Chess the purebred border collie, here to provide with posts which are both informative and delightful. You may remember me from such posts as “One Thing Follows Another” and “As Above, So Below”.

Here I am in a characteristic pose, on this dark and chilly day.

I made the guy I live with get up at 5:40 this morning because I wanted my breakfast. It was still dark, and so, probably just to spite me, he made me wait until it got lighter (I wouldn’t say that the sun came up) before we went on our walk. So to spite him I made it into a really long walk, on a dark, drizzly morning, and his shoes got soaking wet.

He was happy that I’ve been feeling so chipper (I even wanted to chase the min pin who walks in the field, this afternoon), but not so happy that his shoes got all wet, and after a while he went out in the car and I stayed at home. This was ostensibly to go get me some more biscuits, which I need a lot of, but he had an ulterior motive, which I’ll expose right now.

The guy I live with went to a nameless garden at an undisclosed location in order to swipe some seed. He didn’t tell me if he employed a fake accent and wore a disguise but I wouldn’t be surprised. My mommy thought this was all completely ridiculous and she would just brazenly swipe seed without a care in the world, but he doesn’t have her around any more to tell him that fake accents and disguises really aren’t necessary, because hardly anyone cares. 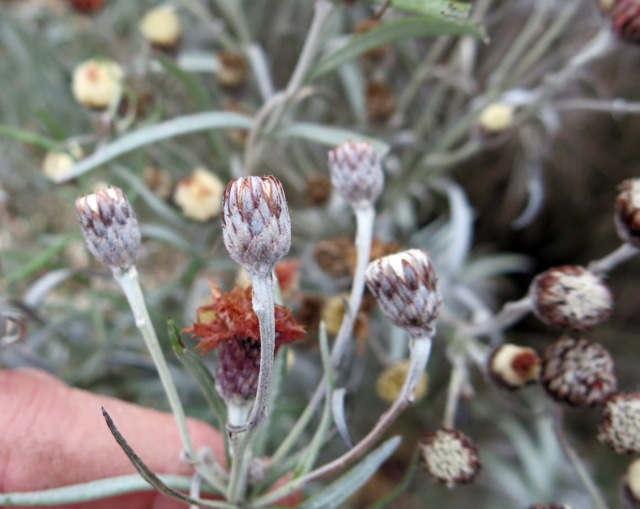 That’s the guy I live with’s (aka Mister X’s) finger there. Driving away from the garden, he was certain that a black SUV was tailing him, and he was about to take evasive action when the SUV passed him and turned out to be green.

Well, here’s the informative part. (You can just skip this if you want.)

This is Vernonia larseniae. It was originally named as Vernonia lindheimeri var. leucophylla by Esther Louise Larsen, “collected along the Sanderson-Sheffield Road, twelve miles from Sanderson, Terrell County, July 19, 1921” in Texas. It was later renamed for her, as V. larseniae, in 1978.

The guy I live with even went so far as to email the Lady Bird Johnson Wildflower Center to get the name spelled right http://www.wildflower.org/plants/result.php?id_plant=VELA3 because it was spelled “larsenii”, which is male. As you can see, they fixed it today.

So then, he did some more Googling, and Sanderson, Texas, is USDA Zone 8b. Vernonia, the guy I live with says, has a reputation for difficult-to-germinate seed, and he wondered why a plant growing in Zone 8b might need cold treatment like some of the online stuff suggests. He’s still wondering. (He also wonders why this zone 8b plant is hardy here and most other zone 8b plants aren’t.)

For someone who just germinated some manzanita seed after chipping it and five months stratification in the refrigerator, he certainly seems to have patience. At least for seeds, anyway.

Whew, huh. To make up for this, here are some pictures of the garden the guy I live with took about 6:30 this morning. Things have changed since the last time he took pictures.

You can see where my buddy Slipper gnawed the 4×4 when he got excited, like he was a giant, nefarious rodent. The star is still leaning after I pointed it out the last time.

This is Abies lasiocarpa ‘Arizonica Compacta’, or some such thing.

He took the tree wrap off the Russian hawthorn.

He put up a bird feeder, which you can see behind the hanging solar lantern, and Earl jumped up there and knocked all the seed out of the feeder. The guy I live with was pretty ticked off, and took down the feeder. He’ll put it up tomorrow in “a place where squirrels can’t get to it”, wherever that might be.

The spindle tree, Euonymus europaea, has turned dark red in the last couple of days.

The enclosure, with the Big Metal Chicken. The bright red is Cotoneaster horizontalis. 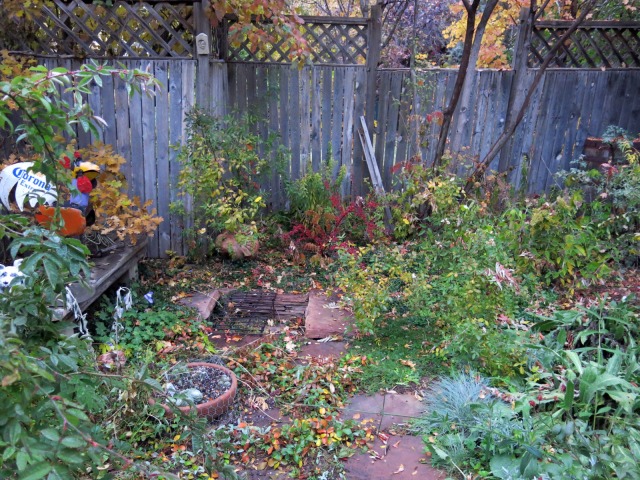 Crataegus douglasii lighting up the “way back” garden. 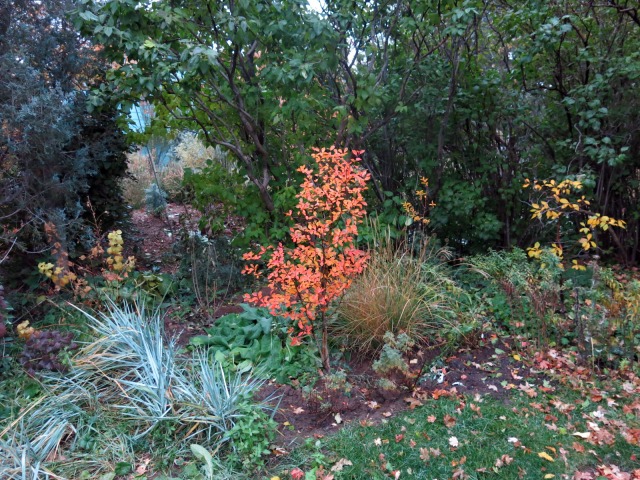 Then looking back toward the house, on the path by the North Border. If you look extra closely you can see the new arbor the guy I live with is building, almost out in the front yard, behind the one my mommy built. Hers will be sturdier, I’m sure. 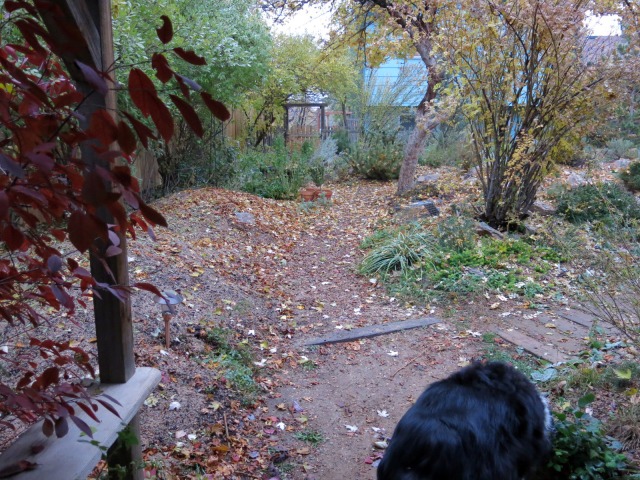 What else? Well, it’s almost Halloween, which was my mommy’s favorite holiday after Christmas. She would sit downstairs with the two of us, me and my buddy Slipper, while the guy I live with gave out candy at the front door, and we barked a lot. This year he bought a bunch of candy and, um, had to go get more on his trip out this morning.

I guess I’ll go now. I hope you enjoyed at least part of this.

idle
View all posts by paridevita →
This entry was posted in Uncategorized and tagged Vernonia larseniae. Bookmark the permalink.

26 Responses to the seed whisperer